Our writer tried a vaginal egg and it didn't kill her

Yoni eggs, popularized in part by Gwyneth Paltrow's GOOP, are not without controversy. 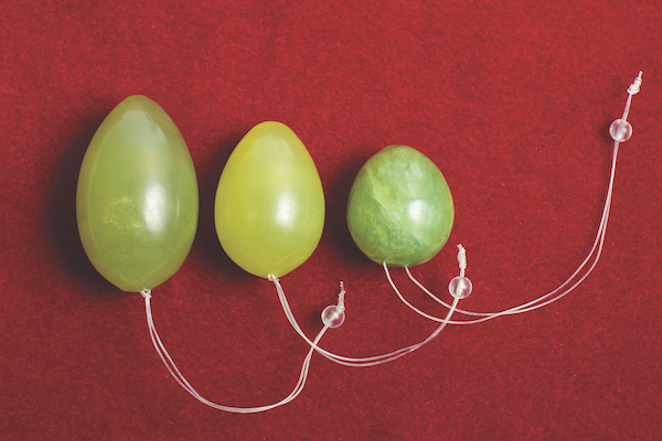 Adobe Stock image
Lisa L. Kirchner's yoni eggs came in three sizes and, contrary to what a local aesthetician told her, women should start with the largest one first.

“Hey, do you have vaginal dryness?” read the text.

It’s not every day you get a message like that. It was my editor; she’d read my memoir about living in the Persian Gulf and going through menopause starting at 38, so it wasn’t totally out of order. Vaginal dryness can be a consequence of menopause. And editor requests are the stuff freelance journalists dream of, even if the phrase “vaginal atrophy” is the stuff of nightmares. I did have experience with this issue, and there’s a wealth of disinformation out there, possibly starting with your neighborhood day spa. We’ll get to that. First, let’s talk vaginas.

Some 32 million women in the U.S. suffer from genitourinary syndrome of menopause — another unfriendly name, but preferable to, and more accurate than, the hideous vaginal shrinkage, which fails to take into account the entire reproductive system, because menopause affects the entire body. We’ll get back to that, too. The bleak part of this is that only a small percentage of women even address the issue with their doctor. I almost didn’t.

Part of the challenge is that GSM encompasses a range of symptoms that vary among women, both in type and severity, from intense to mild. In my case, I was unaware of any problem until years after I’d been through menopause, which clinically “ends” after 12 months without a period. The issue surfaced after my mother died and my love life went on hiatus. At my gynecologist’s office I could barely tolerate the insertion of a speculum.

“You have thinning vaginal walls,” she told me. I told no one. The doctor recommended vaginal estrogen cream, but I’ve never been a fan of using drugs when you don’t need to, so I didn’t follow the regimen.

When GSM did become an issue, my solution was simple: Loads of lube. For many, it’s not that easy. GSM can also bring discharge, burning, itching, incontinence and more frequent urinary tract infections. This is a healthcare crisis when you consider the silence around GSM, and this is where disinformation during facials comes in.

My editor saw crystal rocks and wands at a local aesthetician. Discovering these were “yoni eggs” meant to stimulate the vagina gave birth to this story. That’s where I got on the case.

As a yoga teacher, I already knew that yoni is the Sanskrit word for the female reproductive system, and a yoni egg is an egg-shaped stone that can be made of various shapes and types of crystals, and meant to be inserted into the pelvic floor as part of your Kegel routine. I was aware also of Dr. Jen Gunter’s long-standing feud with GOOP, the wellness website founded by willowy fairy-child Gwyneth Paltrow, and Gunter’s contention that yoni eggs could cause toxic shock syndrome. This past September, the government fined GOOP $145,000 for making false claims about yoni eggs.

Tenney Naumer via Flickr/CC2.0
Lisa L. Kirchner realized the real danger wasn't the yoni egg, but improper Kegels. Which are a thing. Apparently.

My first sense all was not as it should be came when I asked what the provider/aesthetician thought of this controversy, and she was unaware of the issue. Then, when I asked why I might choose rose quartz versus jade or obsidian, or the egg versus the wand shape, she said the crystals would choose me. Alas, a deadline loomed, so I selected the one I thought prettiest — jade. She gave me a small, medium, and large egg and told to start with the smallest, working my way up. How long that would take, or what working my way up would look like? She said I’d just know. The only thing I felt called to do was Google.

“The pelvic floor is a complex structure,” says Dr. Rebecca Dunsmoor-Su, an OB/GYN out of Seattle whose entire practice revolves around treating women with vaginal health issues. When asked about crystals for vaginal health, she was vehement: “I cannot recommend any of these things. They’re porous, and you don’t know what bacteria will grow in there. If you’re having painful intercourse, go see an ob/gyn.”
But it floored me when Dunsmoor-Su said that “if any woman is doing Kegels, she should do it in a guided manner.” My yoga teacher suggests Kegels. I have recommended Kegels. It never occurred to me intervention from someone with an advanced degree might be needed. But Dr. Dunsmoor-Su says that hypertonia, an overstrengthening of the pelvic floor, can result from improperly done Kegels, leading to painful intercourse. “Undoing this kind of damage is terrible.”

Dr. Dunsmoor-Su’s treatment plan varies depending upon patient needs. The first step is silicone-based lubricant because, as she points out, for post-menopausal women, killing sperm is a non-issue. When symptoms persist, she recommends estrogen therapy, either in a vaginal cream or pill. For women who can’t take estrogen, whether due to a high risk of breast cancer or personal concerns, she offers the MonaLisa Touch laser.

“I make microabrasions to the vulva, causing a healing reaction, and the tissues re-set to premenopausal looking tissue,” Dr. Dunsmoor-Su says. “But if you just want one because your boyfriend says you’re not tight enough, you need a new boyfriend.”

Wait, what? This raised a whole world of questions — starting with why Dunsmoor-Su felt that a tighter pelvic floor wasn’t an intrinsic part of female pleasure. I disagree. Turns out, the laser costs about $1300 a pop, can take multiple sessions and requires annual maintenance. And so I was back on the crystal quest. I used tampons throughout the ‘80s toxic shock scare. The biggest threat was leaving them in for more than eight hours. I didn’t have eight hours’ worth of Kegels in me.

“I think it’s bullshit, too,” says Isa Herrera, a physical therapist out of New York City, who for two decades has recommended yoni eggs to women who experience pain during intercourse. She strictly recommends nephrite jade.

“I’m evidence-based,” she says, pointing out that there’s no research showing actual correlation between the use of nephrite jade eggs and infection. “You want to boil them between uses,” she adds quickly. “And I don’t use the yoni eggs in isolation, [but] in conjunction with yoga, meditation and vaginal massage.”

Thus far, the only thing that seemed clear was that improper Kegels were the biggest threat, and that could be a problem whether I used yoni eggs or not. Once again, I got online. I learned I wanted to start with the largest stone. The strengthening doesn’t come from the weight, but the manipulation. That made sense, especially when I thought about the Kegel warnings. Trying to ascertain the purported benefits of these things was more of a challenge.

I tried the large egg first. It felt solid. I don’t know that I’d say calming, but centering, maybe? By the second session, I was ready to attempt the medium size. Maybe these crystals were speaking to me. I DID pick jade, that was random. But now I could not ignore the voice in my head, “you don’t know what will grow in it.” This was actually Dunsmoor-Su’s voice, so it was all-around creepy. Finally, I gave a call to my friends at Kripalu (a woo-woo healing center in Massachusetts), who referred me to an intimacy coach.

Campbell has used the stones in her practice for a decade without incident. She says that nephrite jade is not only non-porous, but it absorbs the energy of toxicity — though she, too, warned about improper Kegels.

“Put more emphasis on the relaxing. It’s a squeeze, like an invitation, then a long, slow, full release. That’s how you have better orgasms.” At her urging, I tried again.

I’m pleased to report that eventually I managed to complete a few yoga poses while keeping the egg in place, and all this attention to my vagina did wonders for my sex drive. But I’ve also discovered I can recreate this magic just by holding my egg and doing my Kegels. Most likely, it’s not even strictly necessary I hold an egg, I just so happen to like the weight and feel of it. Campbell suggests this might be so.

“This is one of those things that will come and go in your life,” she said of her own yoni egg experience.

As Dunsmoor-Su said, “maybe I’m biased because I see women when they’re in pain.”

On the flip side, Campbell says that “yoni eggs are the easiest, least expensive and most fun way to have way better sex and keep yourself continent.”

Lisa L. Kirchner is the author of the critically acclaimed Hello American Lady Creature: What I Learned as a Woman in Qatar. Her work has appeared in book anthologies, magazines & newspapers including The Washington Post and Salon. She also writes "Love, Confidential" for Creative Loafing Tampa (send her your sex and love questions here) Celebrity interviews include Amy Sedaris, Xavier Dolan and John Sayles. At one time she was simultaneously the dating columnist for an alternative newsweekly, bridal editor for a society rag and the religion reporter for a gay and lesbian newspaper.

Shaq’s back, and the Bucs should beat the Eagles 34-21 to open the playoffs