“We can’t even imagine what they’re going through..." 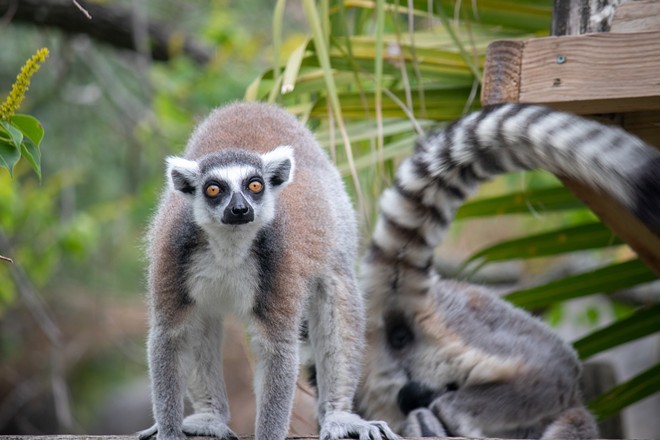 Photo via zootampa/Facebook
ZooTampa
As Russia’s assault on Ukraine continues, zoos are among the many places in the line of fire.

The plight of these zoos has gained worldwide attention—as has the overall conflict—prompting conservationists, animal advocates and other zoos to step up and offer support. ZooTampa is one of them.

In a March Facebook post, ZooTampa said it would donate to an emergency fund created by the European Association of Zoos and Aquaria. The Emergency Appeal for Ukrainian Zoos fund is an effort to streamline incoming support from zoos and individuals around the world. As of March 30, dozens of zoos and nearly 10,000 people have donated, totaling € 920.339 (a little over $1 million USD) so far.

That money is being sent to zoos in Ukraine to help with food and care for the animals as well as the caretakers who have stayed behind to protect them.

“We can’t even imagine what they’re going through with bombings and war and all that on top of having to worry about the financial aspect of it,” Tiffany Burns, director of conservation at ZooTampa, told Creative Loafing Tampa Bay. “They have a lot of different stressors that they’re dealing with; this is just one way that we can kind of help take a little burden off.”

In normal circumstances, it takes enormous amounts of money to feed and care for zoo animals. To put it in perspective, Burns said ZooTampa spends upwards of $40,000 a month just to feed its manatees.

The EAZA said it’s been in contact with at least three major zoos in Ukraine—Mykolaiv (Nikolaev) Zoo, Kharkiv Zoo and Kyiv Zoo—and is working with the Ukrainian Zoo Association to connect with other parks. Those three zoos and others are in cities that have been under attack by Russian forces.

Dr. Samantha Ward, a zoo animal welfare scientist and lecturer at Nottingham Trent University, wrote an explainer for The Conversation about what’s happening to the animals at zoos in Ukraine. She detailed the possible “terrifying impact” just the noises of war are having on the animals.

There’s also the problem of wanting to move the animals away from the shelling. Burns said in most cases that just isn’t possible or safe.

“These are pretty serious animals, and they have certain restrictions to keep them safe and keep others safe,” she said. “It’s a very difficult situation that (the caretakers are) in. And what a hard decision; you know you have to stay.”

The Mykolaiv Zoo said it has heard air raid sirens, gunshots and other sounds of battle less than a mile from its doors. When the first rocket landed at the zoo in February, Euro News reported the park put it on display at its museum. No humans or animals were hurt.

The Washington Post reported last month about 80 people (caretakers and their families) moved into the zoo in Kyiv to provide round-the-clock care for the animals. Some of the animals have been given sedatives or moved into underground spaces to shelter when air raid sirens ring out. But some animals are too big to do so, and those spaces can only drown out so much.

“They have no space to hide or run. Once they’re out of the zoo, they have fewer options than any human. It’s going to be the streets with tanks,” Kyrylo Trantin, the zoo’s director, told the Post.

For the Feldman Ecopark zoo in Kharkiv, the park’s owner recently made the heartbreaking decision to euthanize all of its large animals. After surviving weeks of bombings, the owner said the animals’ enclosures aren’t safe and fears the lions and tigers will get loose in the city.

Burns said the only thing we in Florida have to compare to this situation is hurricanes. Tampa Bay area zoos, aquariums and other attractions with animals all have contingency plans in case of a hurricane to make sure all animals are cared for.

“But I don’t think anything compares to what they’re dealing with right now,” Burns said. “We are absolutely inspired by their dedication to those animals.”

Beyond the initial donation to the emergency fund, Burns said the zoo will evaluate the need to make another donation. She said anyone who wishes to contribute to the fund should do so via the EAZA’s link.

“To our fellow Zoo Keepers, your love, dedication, and bravery are truly inspiring, and we stand with you!” ZooTampa wrote on Facebook.