There are three major film festivals in the Bay area, and all three seem to be in transitional modes this year. The Tampa International Film Festival, the most seriously cinema-minded of the batch, and the Ybor Festival of the Moving Image, the most whimsical and experimental (with forays into political essaying), seemed at times almost to be exchanging identities last year, a blurring that might have been exaggerated by the two events taking place in an overlapping time frame. The date conflict has been fixed (TIFF will debut in a new early-February slot this year, while YFMI remains ensconced in April), but everything else is up for grabs. And then there’s the Tampa International Gay and Lesbian Film Festival, currently breaking in yet another program director — Joseph Cook — in what is beginning to look like a revolving door of curators. Still, the signs are all pointing toward TGLFF sticking with a proven formula that’s drawn ever larger crowds through the years, making this one of the biggest events of its kind in the country. The line-up for this year looks to be another intriguing mix of creativity, commercialism and unqualified craziness, and expectations are running high. The 2005 festival should be a landmark year, if only for the input of one Ronda Storms, a woman whose name might have destined her for a career as a TV meteorologist, but who instead became one of the biggest unintentional supporters of the arts the Bay area has ever seen. Storms’ misguided actions have so energized thinking members of both the gay and straight communities, that the upcoming Tampa International Gay and Lesbian Film Festival might just prove to be a rallying point for passions beyond our wildest dreams. Tampa Gay and Lesbian Film Festival, Oct. 6-16, 813-253-3333, ext. 3425, http://tampafilmfest.ut.edu. Runners Up: Tampa International Film Festival, Feb. 3-11, 813-253-3333, www.tampafilmfest.com; Ybor Festival of the Moving Image, April 4-9, 813-253-7674, www.yborfilmfestival.com. - Lance Goldenberg 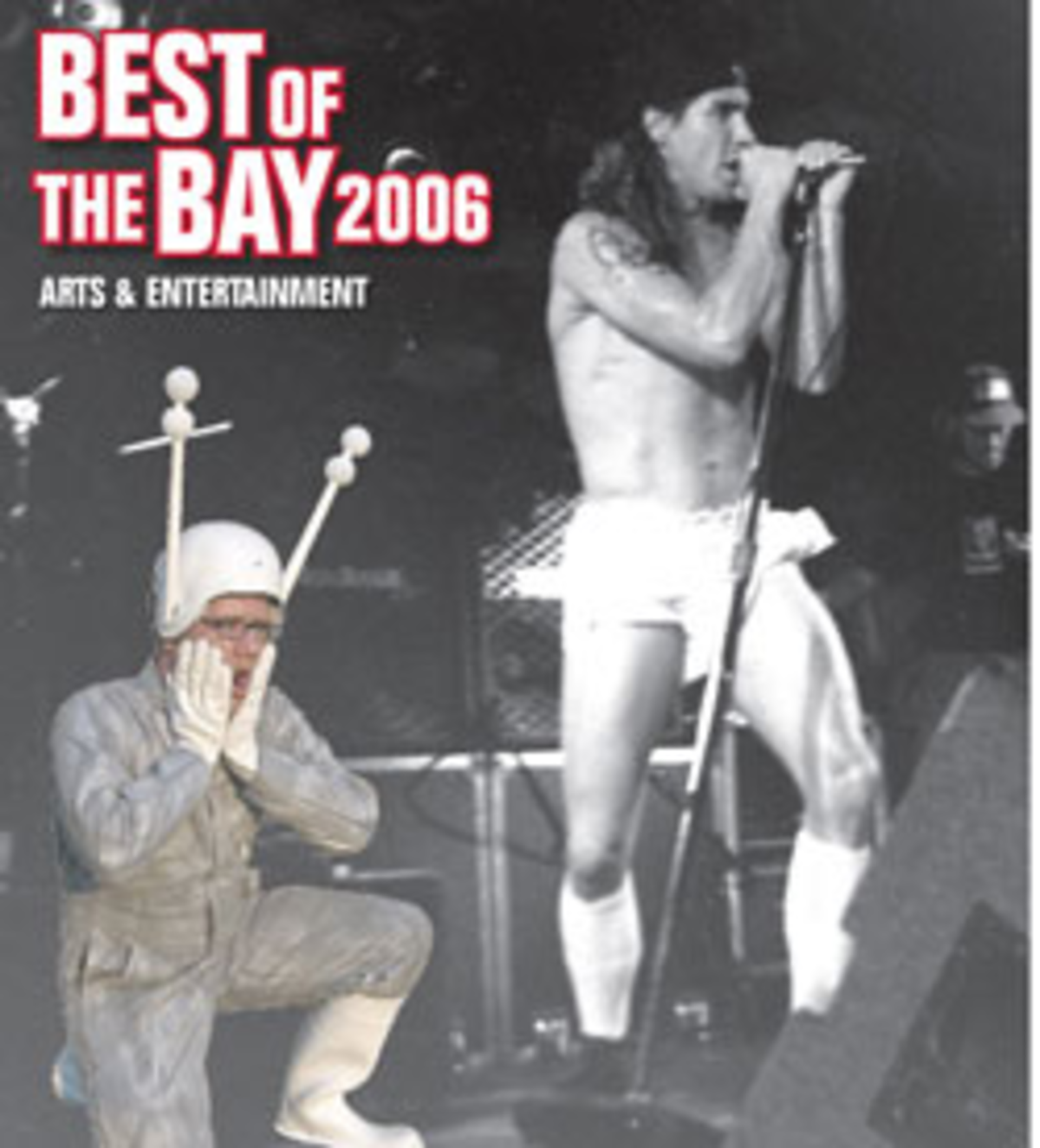 Holloway has only recently started his professional career, but in three plays for Stageworks he showed himself to be a hugely talented character actor. His best work was in Lanford Wilson’s Talley’s Folly, where he played Matt Friedman, a courtly, self-deprecating Jewish accountant devoted, in the year 1944, to romancing the overcautious Gentile, Sally Talley. But he was also terrific in Arthur Miller’s All My Sons as mercurial George, oscillating between love and hatred of the Keller family; and in The True History of Coca-Cola in Mexico, where he played everything from a conquistador to an old, tired farmer about to be moved off his land. - Mark E. Leib

American Stage gave Tanner a terrific part a few months ago, and the result was a performance that will linger in the mind for years. Tanner was Catherine in David Auburn’s Proof, a play about the daughter of a famous mathematician, and about her troubled inheritance — of her father’s genius and, perhaps, his madness. Tanner took this complex part and didn’t miss a contradictory detail: She was brilliant, impulsive, angry, sarcastic, subject to depression, worried for her mental health, funny, compassionate, irritable and tender. - Mark E. Leib

Erika Greenberg Schneider’s building in Tampa Heights is her home, printmaking studio, gallery, salon of dance, music, poetry, film, video, theater, haute cuisine etc., etc. Working with serious and cutting-edge artists (to name-drop a few: Elsa Valbuena, Chef Gui, Robyn Voshardt/Sven Humphrey, Neil Bender), she presents cross-disciplinary art events that are always fresh in the intimate setting of a salon (think Gertrude Stein, Picasso, Paris…). Erika has opened her space not only to her international printmaking contacts and USF colleagues and students, but to the entire cultural community of Tampa Bay. Her labor of love has been a gift to local artists, connoisseurs and collectors. Bleu Acier imbues Tampa Bay with a bit of bohemia. 109 W. Columbus Drive, Tampa, 813-272-9746, [email protected] -Mary Mulhern

These two preservationists have worked tirelessly to prevent the owners of the 100-year-old Henry Plant hotel in Belleair from selling its destruction. Owners Urdang and Associates threaten demolition of the structure, but the reluctant town council is finally hearing the citizens’ requests for a local historic preservation ordinance with teeth. Still trying to save the Biltmore, the two have parted ways over the preservation alternatives they seek. Hein can be reached at www.savethebiltmore.com; Johnson at [email protected] -Mary Mulhern

Not your garden-variety ecoterrorists, Yard Ops (Young Architects Resisting Destruction of Public Spaces) arrives with brooms, garbage bags and pruning shears to save the landscape. The positive approach of Chris Vela and other young architect colleagues was instrumental in helping the City of Tampa’s parks department to maintain the neglected Dan Kiley-designed park at 400 N. Ashley Drive. Their grassroots effort helped win the mayor’s commitment to protect (some of) this historic masterpiece of landscape architecture. Thompson and Grunke put together a symposium, wrote historic preservation applications, lobbied City Hall, and passionately and persuasively convinced the city and citizens to protect the Dan Kiley design. [email protected]; [email protected] -Mary Mulhern

Not just a local legend and sentimental favorite, Bud Lee’s important ’60s and ’70s photographs were shown in beautiful new digital prints at the Tampa Museum of Art. The show was curated by Jill Jimenez under Emily Kass’ directorship, before both became casualties of Tampa’s ongoing museum upheaval. Every one of Lee’s photographs — from portraits of rock ’n’ roll icons Janis Joplin and Mick Jagger to Florida’s carnival of weirdness — shines in its uniqueness. The prints are now part of the museum’s permanent collection. 600 N. Ashley Drive, Tampa, 813-274-8130, www.tampagov.net/dept_Museum/. -Mary Mulhern

The Tampa Bay Performing Arts Center continues to be the most important, wide-ranging theater organization in our area, and the irreplaceable Judith Lisi continues to keep the joint a-jumpin’. Some highlights from last season: the operas Madama Butterfly and Aida; the visit of luminous soprano Jessye Norman; Shawn McConneloug’s music/dance/theater piece Stand On Your Man; Leonard Nimoy’s tribute to Van Gogh, Vincent; The Acting Company’s production of Shakespeare’s Two Gentlemen of Verona; Steve Solomon’s comedy My Mother’s Italian, My Father’s Jewish and I’m in Therapy; and the wonderfully funny Broadway musical Hairspray. Add Lisi’s wisdom in providing a home for the increasingly important Jobsite Theater and her sponsorship of the Patel Conservatory, and you’ve got a bunch of reasons to be glad she’s here. -Mark E. Leib

Gallery Director Carrie Mackin and cultural anthropologist Shari Feldman set up a portrait studio at Covivant Gallery in response to the Hillsborough County Commission’s legislated discrimination against gay pride. Friends, neighbors and families of all sexual orientations came for family portraits. Love the red velvet, love the expansiveness of “family” that the word represents. A sweet and simple idea — a family portrait to remind the neanderthals of how civilized people respect each other and live together. 4906 Florida Ave., Tampa, 813-234-0222, www.covivant.com. -Mary Mulhern