As part of its new $2.2 million building on E. Martin Luther King Jr. Boulevard in Tampa, community radio station WMNF wouldn’t be expected to install anything less than the most environmentally friendly, drought-tolerant plants for its landscaping. Even in the heat of summer, WMNF’s little slice of landscaping heaven is blossoming, according to station manager Vicki Santa. By using xeriscaping principles and native plants, the landscaping uses less water and is a better host to native animals and insects, according to landscape designer Brian Schatz. The key, he says, was using native plants, which often are neglected even in xeriscaping projects. “Native plants get the short shrift; they don’t get the notoriety and don’t get installed that much,” Schatz said. He contributed the design pro-bono; the Florida Native Plant Society provided the physical labor and is maintaining it. 1210 E. Martin Luther King Jr. Blvd., Tampa, 813-238-8001, www.wmnf.org. 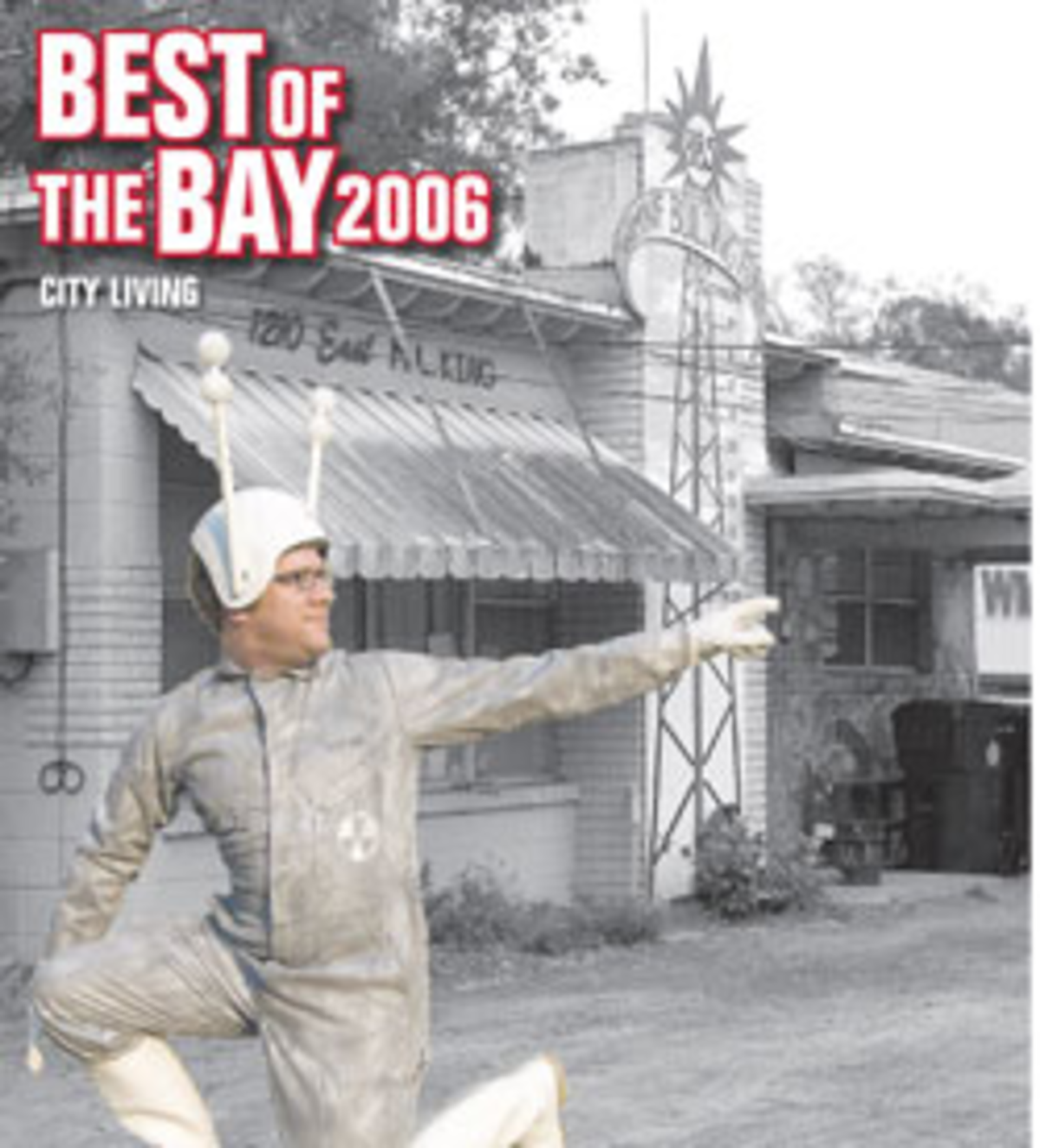 Back, oh, in the late ’50s, the folks at community radio station WMNF-88.5 FM decided they needed a new space from which to broadcast their brand new Buddy Holly 45s. Several decades later, they reached their goal. (OK, the building fund drive took a lot less time than that, and it yielded several years’ worth of good shows and other benefit events put on by the station.) But we’re glad it’s over, aren’t we? Didn’t you get just a tad weary of hearing about it? After a few years, we thought the building fund was some Beckett-esque gag perpetrated by those inveterate jokesters over at the station. But we were pleased to discover that they actually used the funds to put up a spanking new building. We can only be thankful that erecting their new headquarters took but a fraction of the time it took to raise the dough.

We understand, even if we don’t like it, that corporate radio is now completely under the control of a centralized radio god who spoon-feeds the masses aural pabulum. But when the jazz programs at WUSF-89.7 FM switched to an automated format — with DJs taping intros to sets, which then go into a digital program assembly — that saddened us. WUSF has been running after-midnight jazz programming since 1979 in a loose, free-spirited fashion that relied a lot on listener interaction. It’s a shame to see that go away. Program Director Bob Seymour now selects and compiles all the music, and as radio gods go, he’s a damn good one. No complaints there. (We should also add that the decision to automate was not his, but General Manager JoAnn Urofsky’s.) Still, we’re going to miss the individual tastes and idiosyncrasies of the other jocks. Plus, jazz is built on spontaneity; isn’t automation antithetical?

It’s as prime an example of irony as any: a marketing company marketing its marketing skills via an advertisement that displayed no marketing skills whatsoever. For months, Odessa-based AdSizzle exposed itself to potential clients with a billboard, facing northbound I-275 in South Tampa, that featured only a fiery logo and people dressed in black cocktail attire. A dance act from some cruise ship? We can’t be sure. We do know, however, that the ad exhibited all of the creativity and cutting-edge marketing savvy of a sandwich-board sign and a handbell. www.adsizzlemarketing.com.

Three types of bars make for good solo drinking: 1. The depressing hole-in-the-wall, where you can anonymously drink yourself into a stupor. 2. The singles bar, where you can anonymously leave with someone else. 3. The Friendly Tavern. A textbook dive, complete with crooning country on the jukebox and NASCAR on the TV, the Friendly Tavern lives up to its name. The regulars are quick to buy the new guy a beer or play him in a game of pool, and if you don’t know the words to Lefty Frizell’s “Saginaw, Michigan,” the crew will be happy to teach you; the tune plays every 20 minutes. If solitude is what you’re after, the folks at the Friendly Tavern are happy to oblige. But unlike most bars, a good conversation is always just a stool or two away. 3120 W. Gandy Blvd., Tampa, 813-837-5913.

If you’re past your athletic prime, but can still play some, there’s a problem with hoops leagues: They tend to be either filled with young guns who have plenty of attitude, or populated with rec ballers who really can’t play. The St. Pete Beach league overcomes this issue with a minimum age limit that keeps out too much raw talent. (You don’t see very many dunks in these games.) There are still plenty of good players, though. Some of the younger guys can really bring it, and the long-in-the-tooth fellas can usually shoot and pass well. The play is by and large clean, but never dainty; there’s plenty of defense (unlike a lot of run ’n’ gun leagues) and overall there’s pretty good competitive balance. Plus, there’s a bonus for oldsters: the St. Pete Beach gym has a short court. 7701 Boca Ciega Drive, St. Pete Beach, 727-363-9245.

The awning out front of Sunrise Lanes actually says “A breath of fresh air.” Bowling alleys have come a long way since the smoke-filled days of yore. Inside, Sunrise Lanes is smoke-free and tripped out in blacklight-friendly surfaces (love the swirling purple and orange galaxy of pins and balls displayed at the end of each lane), which are put to good use during “Galactic” bowling. A mix of flashback atmosphere, loud music and rolling glowing orbs, Galactic bowling is a big hit with the kids. For traditionalists, Sunrise has 32 lanes, leagues galore, a giant game room, pool tables, and a kick-ass bar where bowlers can down a few and rehash that amazing 7-10 split pickup. Check the neon sign out front; if it’s glowing pink, lanes are available. Sunrise Plaza, 6393 Ninth St. N., St. Petersburg, 727-522-2174.