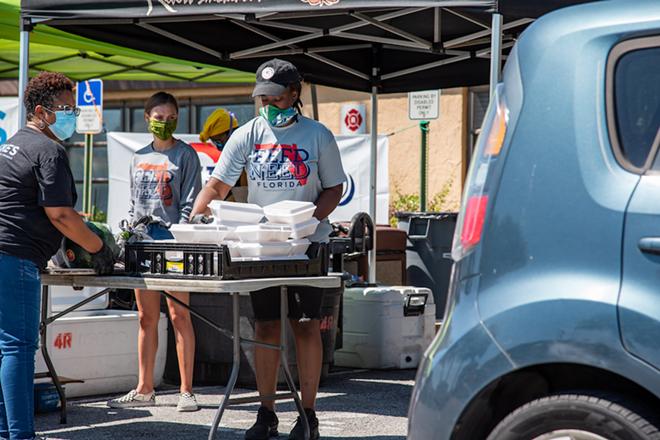 As communities across the state face the reality of limited access to fresh food, restaurateur John Rivers, founder and CEO of the 4 Rivers Restaurant chain, created a program to provide fresh foods to students and families in their time of need.

Rivers founded and launched the Feed the Need Florida program shortly after the state went into quarantine. Feed the Need Florida is an extension of his 4Roots nonprofit foundation and partners with several restaurants, farmers, local organizations, public school systems, and the Florida Department of Agriculture and Consumer Services to supply families in need with donated meals.

“The initiative is being done to feed the needy, create jobs, and teach the people about agriculture to reduce produce waste across the state,” Rivers tells Creative Loafing Tampa Bay.

COVID-19 halted any farm efforts, but Rivers saw an opportunity, starting with Orange County Public Schools (OCPS), to feed students who weren’t receiving the daily free meals. He partnered with OCPS first to make sure daily meals were passed out. The partnership quickly grew from two initial sites in Orange County to 46 sites throughout the state including Tampa Bay.

“We saw needs in the marketplace where students weren’t being reached in their free lunch program,” says Rivers.

In mid-March, Rivers put plans in action; he was serving meals just two weeks later on April 4. It was fairly simple for Rivers to put all the logistics together since he already had a catering team and facilities to house food for meal prep. He reached out to a number of people including OCPS Superintendent Dr. Barbara M. Jenkins, Ed.D and Florida Commissioner of Agriculture Nikki Fried to figure out how to disperse food to families in need of help.

“When we did the first feeding, we noticed only the students in the car were being fed and the rest of the family wasn’t getting anything. That’s when we decided to find food to feed these beautiful families,” he says.  “This is really a community event. As long as there are hungry people out there and folks are kind enough to support us, we’ll keep making meals.”

In eight weeks, Feed the Need Florida reached a milestone: 500,000 meals donated to deserving families. Rivers says as long as there is food out there and people willing to support, they’ll keep making meals and feeding people. Although it seems like everything came easy for the program, there is still room for learning when it comes to figuring out the right way of donating food.

“We’d never handed out meals before, so we had to adjust to regulations and requirements of the state for feeding students on top of the complications of COVID-19 feeding. It’s not like a traditional catering we’re used to,” Rivers explains.

Each donated meal consists of fresh ingredients like rice and noodles as a base with proteins like chicken and mojo pork, veggies, and black beans. Meals differ depending on what’s available, so families aren’t getting the same food every time. The food is sourced from either the Feeding Florida organization’s network of farmers or through direct farmer relationships.

“We’ll start serving somewhere at 10 a.m. Cars are lined up by 8 a.m., and that gives you an indication how great the need is. It’s really beautiful and it really moves your heart,” says Rivers.

Feed the Need Florida does about three events weekly. Recently, one of the first events for the program in Tampa involved partnering with Children’s Home Network to hand out 300 meals to families at the 4 Rivers Restaurant in South Tampa. Rivers describes the partnership as “an easy, natural alignment” due to previously established relationships with others involved in the Tampa Bay foster care system.

A special treat for those families came from the opportunity to be served by WWE wrestlers Titus O’Neil and Dave Bautista. Rivers, O’Neil, and Bautista have been friends for years and helped each other with various charitable endeavors over the years. Rivers says they’re fans of the restaurant and the 4Roots Foundation.

“When Titus found out about it, he wanted to come and help serve with us. It was really awesome especially for the kids and families that recognized him,” says Rivers.

O’Neil says he’s always honored to help those in need because he grew up in similar circumstances. He says if it wasn’t for the help of others, he and his family wouldn’t know where its next meal was coming from.

“Being on the other side, I can understand it better. I can empathize and sympathize with those families plus the social workers working to curb food insecurity in neighborhoods,” O’Neil tells CL. He says it’s a pleasure working with Feed the Need Florida and John Rivers because of their substantial work and readiness to help others in need.

“Their heart is pure and what they’re doing doesn’t need a lot of fanfare besides the fact they’re doing it. They just want to do the work, and that’s all I’m interested in,” says O’Neil. For him, making a difference in the families is something he’ll cherish.

“Anytime you’ve been in a situation where you’ve been less fortunate or needed encouragement, when someone provides that resource to make things better, it’s always rewarded,” O’Neil says.

To date, Feed the Need Florida has served 760,000 meals and created over 300 jobs. According to Rivers, he doesn’t foresee the program ending any time soon.

“It started so spontaneously. We’re going to do it as long as people are hungry and we can feed them,” says Rivers.