Eden is at the old Franklin Manor. 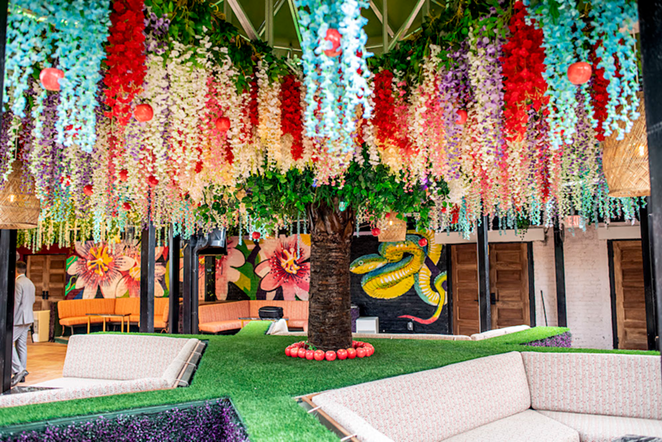 The fancy new spot is in the old Franklin Manor location, at 912 N Franklin St., and any stink of the controversy that Manor left was wiped away with a $4.5 million renovation. Eden owners Asad Yusupov and Kevin Stowe, of the Phoenix Hospitality Group, also opened the Asian-fusion Haiku restaurant just a block away in January.

The two-story, paradise-themed club has three sections: Hades (animal skulls, spooky photographs with black leather VIP booths and gold cages), The Ark (12,000 hand-carved wood pieces with a DJ booth and VIP tables), and, of course, the garden of Eden (massive amounts of flowers and vines, a mural by artist Matt Kress and a giant tree garnished with red apples).

“We built Eden to represent choice,” Yusupov said in a release. “We built the entire concept around choice, whether you want to be in the serene, majestic outside with the flowers, or inside, with even more opportunities to explore.”

Throughout, scantily clad Eves of Eden are working hard pouring drinks and dancing on poles. And though the Eves are barely clothed, guests have to follow a strict dress code: no athletic gear, flip flops, jerseys or sunglasses. Leave your yoga pants on the couch.

A food truck run by Haiku is available until late night to soak up specialty cocktails named after the seven sins like the Gluttony (Ketel One, hibiscus and simple syrups, and lime).

Tickets for the grand opening party are $50 bucks. The celebration starts at 8 p.m., with DJ Papadon playing with the “Sisterhood of Hip Hop” star.

For tickets, or information go to edentampa.com.