And SpookEasy Lounge soft (re)opens in Ybor City next weekend. 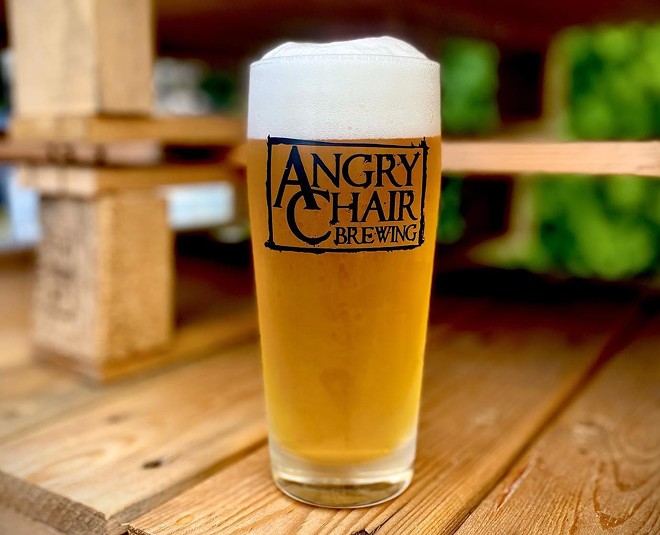 SpookEasy Lounge After a full year of being closed, Ybor City's go-to spot for all things spooky and haunted returns—and will finally sell alcohol. SpookyEasy Lounge celebrates its soft opening at its new location on Thursday, Sept. 4, although the party will probably continue throughout the weekend. Self-proclaimed as the “Most Haunted Kava Bar in the World” the gothic lounge will occupy both floors of the historic building, which offers more than enough space for themed parties, game nights, film screenings, and more. A small food menu is planned alongside extensive drink offerings, with casual bites like wings, burgers, fries, sandwiches and hot dogs. The upstairs area—which will live at the space last occupied by "Bar Rescue" restaurant The Loft—will be designated for kava, tea, coffee, CBD and delta-8 and boast more of a laid back, lounge-type atmosphere, while the basement (deemed the "catacombs") will offer a full service bar with signature cocktails.  Sandwiches and other breakfast options will be offered in the morning, but its kitchen will remain open until closing time (which can be as late as 3 a.m. on weekends.) 1909 N 15th St.,Ybor City. spookeasylounge.com

Angry Chair Brewing Great news for Seminole Heights' craft beer fans: Angry Chair Brewing is re-opening, and it finally has a parking lot.“We’ve got beer! We’ve got food! We’ve got parking! All that’s missing is you… so come on down this week and check out the new digs,” says a recent post from the brewery's social media. Angry Chair Brewing celebrates its soft opening at its new location this weekend, from Thursday-Sunday, Aug. 25-28. For the next few weeks, the recently-opened brewery will operate with limited hours of 11 a.m.-10 p.m. on Thursdays, 11 a.m.-11 p.m. on Fridays and Saturdays, and 11 a.m.- 8 p.m. on Sundays. Its announcement also states that Angry Chair hasn’t started brewing at its new location just yet, although it will boast an extensive tap list for this weekend’s debut. And although its food menu hasn’t been released yet either, the brewery now offers a few beer-friendly dishes like smashburgers, pretzels with cheese fondue, wings and tacos. 4101 N Florida Ave., Tampa. angrychairbrewing.com

Two Graces Known for its unique twist on American cuisine and luscious outdoor garden, St. Pete eatery Two Graces has quietly shut its doors. While its exact closure date cannot be confirmed, confused customers recently took to local Facebook groups to find out if the restaurant was permanently closed or not. A former Two Graces customer posted to the popular group I Love St. Pete last week, stating that she had spoken with previous employees who told her that the business had been sold to new owners. Representatives from Two Graces also confirmed the sale of the restaurant in a private Facebook message. The eatery at 6001 Central Ave. in West St. Petersburg had a strong focus on outdoor dining with three different patios, offering guests a view of the lush gardens where its fresh herbs, vegetables and fruits were grown. Its brunch and dinner menu changed every few months, always incorporating seasonal ingredients from its own garden and beyond. Some of its farm-to-table dishes included elegant spreads like short rib tortellini, black garlic pork shank, spinach falafel, beet and burrata salad and charred octopus. 6001 Central Ave., St. Petersburg

Chef Tony Macaroni & Co. A first generation Italian-American born and raised in Brooklyn, Chef Tony Macaroni’s fresh, hand-pulled mozzarella, decadent pastas and larger than life personality will soon have a brand new home in North Tampa, when his first official restaurant opens soon. Up until a month ago, Macaroni operated a fast casual Italian eatery out of Seminole Heights’ American Legion—not the most common place for a scratch kitchen. After slinging cannolis and gnocchi out of its tiny kitchen for almost two years, the husband and wife duo opted to leave that location to avoid a sizable rent increase. Tony and his wife Tabitha describe their restaurant as a “modern, quick service Italian-American with a fine dining twist,” and are currently working tirelessly to get their Tampa brick and mortar up and running. The entire menu Tony and Tabitha offered at the American Legion will be available at the new restaurant, in addition to a few “fine dining” dishes like branzino, octopus salad, calamari and more. 5226 Gunn Hwy., Tampa. cheftonymacaroni.com

Torchy’s Tacos If there's any sign that Tampa Bay is becoming Austin, it's Torchy's Tacos opening its first Florida location in St. Petersburg this winter. The fast-casual spot with self-described "damn good tacos" plans to occupy the space that formerly hosted Pollo Tropical at 2314 Tyrone Blvd. N adjacent to Tyrone Square Mall, according to the company's website. Torchy's taco-focused menu consists of breakfast tacos, "damn good" tacos, and items labeled under "not tacos," sides, sweets and drinks. Known for its variety of one-of-a-kind, "only in Austin" tacos, Torchy's stand-out signature is the "Trailer Park" taco. Coming on a flour tortilla topped with fried chicken, green chiles, lettuce, pico de gallo, cheddar jack cheese and poblano sauce, the "Trailer Park" comes with the opportunity to make it "trashy"—subbing out the lettuce for the chain's green chile queso. With humble beginnings in 2006 as a food truck in Austin, Torchy's Tacos now has over 100 locations with more in the works. 2314 Tyrone Blvd. N, St. Petersburg. torchystacos.com —Molly Ryan

Smashburger Fast-casual burger chain Smashburger is about to spread even more smashed meat all over Tampa Bay. Local franchisee Jiandong “Peter” Xu of TLC Gourmet Food International, which currently operates Tampa Bay's only two Smashburger restaurants, recently signed a development agreement with the company to bring 15 new locations to the area. "I’m thrilled to take this next step in my journey with Smashburger,” said Xu in a press release. “It’s an exciting concept that has elevated fast-casual dining with the highest-quality food served in a fun, engaging atmosphere. I love being part of the Smashburger brand, and I can’t wait to get started bringing more of it to the Tampa area.” As of now there's no word on exact locations, or grand-openings. Though the company says the new locations will debut across Charlotte, Hillsborough, Manatee, Pasco, Pinellas, and Sarasota counties. Besides locations on Dale Mabry and in Largo, the chain also has storefronts across Florida in Orlando, Tallahassee and Destin.smashburger.com—Colin Wolf

Cappy’s Seminole Heights location has new owners On April Fool’s Day, nearly 16 years after he opened Cappy’s, Scooter Gabel signed ownership of his Seminole Heights pizza spot over to new owners. But regulars will probably recognize their faces. Together, Marty Iglesias, Frank Cinerar and Kevin Coss have nearly 30 years of experience tossing pies at the rocketship-adorned restaurant at the corner of N Florida Avenue and W South Ave. Noel Cruz—founder of Ichicoro, Gangchu and Corners Pizza—is their fourth business partner and will help run operations at 4910 N Florida Ave. While Gabel took a few of the things that belonged to him like arcade games, pinball machines, those scooters on the wall, Iglesias and his partners made immediate changes of their own. Most notably, customers can now pay with credit cards, order online and even get pizza delivered via UberEats. That means no more handwritten tickets, either. 4910 N Florida Ave. cappyspizzaonline.com —Ray Roa

Marco’s Pizza location fined $8K for violating child labor laws After violating child labor laws, a Marco's Pizza franchise in Riverview will have to fork over some cheese. Investigators from the U.S. Department of Labor's (DOL) Wage and Hour Division found that American Pizza Empire LLC of the Riverview location (5918 Providence Rd.) violated the Fair Labor Standards Act (FLSA) by allowing three 15-year-olds to work past 7 p.m. or more than three hours during a school day between Labor Day and June 1. The business again violated the FLSA after allowing a 15-year-old to operate a power-driven bakery machine to stretch and flatten pizza dough. The same worker accounted for an additional violation after sustaining a burn to their hand during baking activities. The Riverview franchise's case only adds to the fines the Marco's chain has collected in the past. In December 2021, a Charleston-area Marco's Pizza faced over $101K in civil money penalties after DOL investigators found they endangered minor-aged workers by making them perform hazardous or prohibited duties. A Charleston franchise also faced $5,425 in back wages for 26 workers. marcos.com—Molly Ryan