Ash, a new Italian concept from the minds behind Rooster & the Till, is coming to Water Street Tampa

It's the Proper House Group's fifth concept in Tampa. 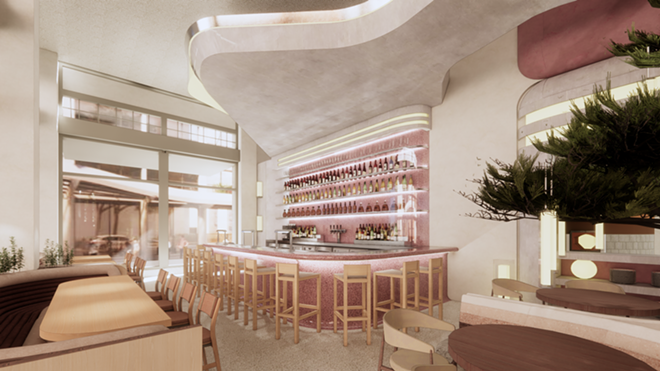 The brand new restaurant is brought to downtown Tampa by a familiar name: Proper House Group (PHG), the minds behind Rooster & The Till, Nebraska Mini Mart and more. PHG said that its latest concept  will specialize in Italian-inspired cuisine and boast an extensive outdoor patio.

Ash’s menu “will offer a focused yet fun and playful cuisine with Italian undertones,” and play neighbor to  popular U.K.-based Asian fusion restaurant Wagamama. Originally slated to debut at Water Street Tampa at the beginning of this year, Wagamama’s website just states that its Tampa location is “coming soon.”

Both restaurants will be located on the ground floor of the Asher building, adjacent to a new Synovus bank.

Renderings from Proper House depict Ash as a sleek and bright restaurant, adorned with pink and neutral tones and large windows. Its curved entryways and accents give it a slight retro feel, but its open floor plan and fresh colors keep it incredibly modern.

A large ash tree resides in the center of the dining room, as  the restaurant's  namesake represents creative expression, productivity, strength and longevity.

Besides its future neighbor Wagamama, Ash will soon join the ranks of other upcoming Water Street concepts like Boulon Brasserie, Predalina, Small Giant Bar & Restaurant, and Wine on Water.

For the latest updates on Ash—like its highly-anticipated grand opening date—head to its Instagram at @ashtampa.