At St. Pete's Lingr, balance and surprise are hallmarks of a revelatory meal from chef Jeffrey Jew

Evocative new restaurant from the Bravo and Food Network celebrity chef is a must-visit. 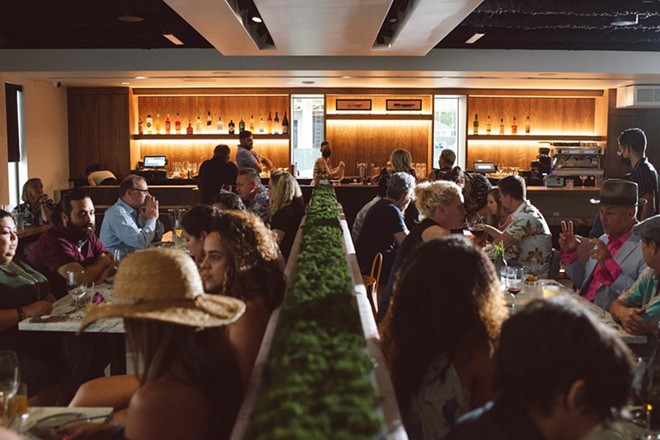 LingrRestaurant/Facebook
Lingr chef Jeffrey Jew and his team invite us to belong—through great service and an evocative space (both inside and out).
Fusion produces explosive power. Take our Sun as the most obvious example. But we also celebrate fusion in music. Say, Miles Davis Bitches Brew or Carlos Santana’s attempts to alter consciousness with Black Magic Woman. Food, on the other hand, often puts up cultural barriers. The rich sauces and fussiness of French haute cuisine don’t crossover into the world of Italian dishes, which seduce with simplicity from the finest, fresh ingredients. Distinct flavor profiles instantly brand gastronomic favorites. When you go to Taco Bell, or even upscale Mexican like Red Mesa, you just know there won't be a foie gras quesadilla.

Lingr Restaurant
400 6th St. S, St. Petersburg
Shareables $5-$17; mains $16-$60; dessert $9; beer, wine, cocktails $8-$16
727-471-6120
lingrrestaurant.com
4.5 stars
Humans seem to seek out the familiar, or at least expect there to be distinct categories for what we eat. Otherwise, there wouldn’t be a proliferation of fast food with McDonalds and KFC as global icons. There’s also comfort in the brands of cereal or candy or ice cream that define our individual tastes. It takes a leap of faith for many palates to jump into the unknown. Americans have come a long way from my boomer youth when cheese was Velveeta, bread was only a fluffy Wonder, and sushi was simply “the undiscovered country from whose bourn no traveler returns.” (Hamlet, Act 3, scene 1).

But Chef Jeffrey Jew takes diners to Hamlet’s Scandinavia as though we were riding on a Chinese junk. His menu reflects his Norwegian-Cantonese roots. And to transform Duke Ellington’s pithy observation about music to the world of food, “If it tastes good, it is good.”

Jew want us to linger at Lingr. We choose to eat tapas style and eschew the entrees.

First, of course, we eat with our eyes and the hamachi crudo plate is stunning. A quartet of thin half moons of lush yellowtail (hamachi) are placed with the flat sides of the fillet on parallel diagonal planes—as though the fish are swimming in a school. They’re floating in jagged circular pools of citrus buttermilk glistening with dots of translucent green dill oil. Each piece is garnished with a golden chip of crisp lotus root. Plus, there’s a touch of Szechuan pepper, some shreds of orange, flakes of sea salt and overarching wisps of fine cranberry powder. It’s so pretty that you almost don’t want to disturb the composition with your folk. But it’s a magical combo, like a jazz riff that you don’t see coming, but that makes you sit up and lets your senses take notice. It’s a sublime beginning. LingrRestaurant/Facebook
Lingr's quartet of thin half moons of lush yellowtail (hamachi) are placed with the flat sides of the fillet on parallel diagonal planes—as though the fish are swimming in a school.
The dishes come out of the kitchen as they are prepared, so they are piping hot and ready to seduce your palate. Take, for instance, the luscious combo of earthy smoked lion’s mane and trumpet mushrooms with brunost (caramelized Norwegian goat cheese), hawthorn cream and sea buckthorn (Chinese fruit adding tart grace notes), plus some heat from chili oil. It’s all mounded on homemade Sami bread, a slightly puffy flatbread inspired by the indigenous people from northernmost Scandinavia with hints of anise from nigella seeds, aka black cumin. Oblique cut scallions and micro greens make for a handsome garnish.

Next, a quintet of tender dumplings is stuffed with soft, creamy smoked potato and asparagus flavored with dill and fennel pollen. They resemble a pinwheel in a bowl fragrant with soy broth hinting of cardamom and chili oil. The stock is jam-packed with sesame seeds and the dumplings support a few sprigs of watercress. 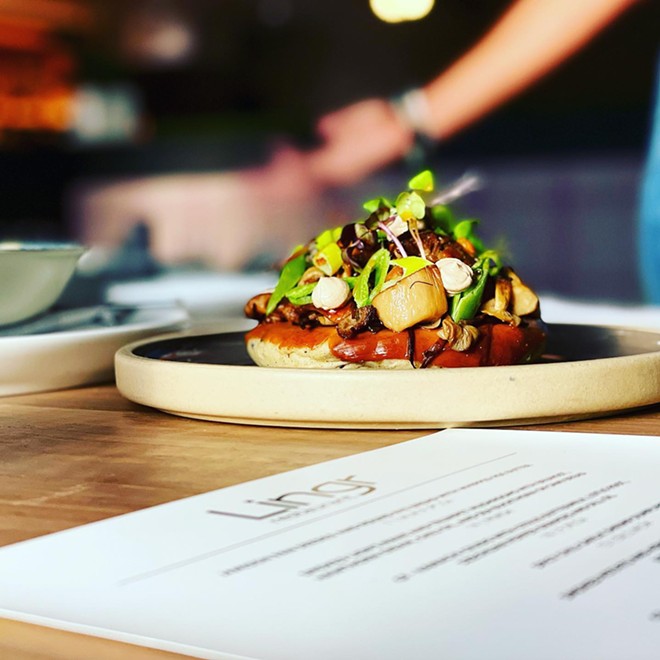 LingrRestaurant/Facebook
Lingr's luscious combo of earthy smoked lion’s mane and trumpet mushrooms with brunost, hawthorn cream and sea buckthorn is all mounded on homemade Sami bread.
Finally, four salt and pepper fish cakes reflect a mashup of cultures. The fat, spiced golf balls of Faroe Island salmon are scrumptious on their own, but the thick sweet-and-sour mustard sauce kicks it all up a notch. It drips down the sides and glistens like molten lava. It’s Norwegian Idun mustard colliding with soy to great effect.

Also, sommelier and general manager, Zach Groseclose, has assembled a superb selection of libations, from an elemental quintet of five spice inspired cocktails to a mouth-watering selection of white wines with the perfect crisp acidity to match the cuisine.

When given the dessert choice between kladdkaka and ebelskivers, we hardly know what to say. And I’m willing to bet your response would be similar to mine. Eh? Uh, could you please speak slowly into my ear trumpet . . . WTF . . . Oh, you’re speaking Swedish and Danish, respectively. The first is a brownie-like cake and the second are donut-esque pancakes. There’s also a spiced parsnip (a la carrot) cake with sweet mandarin cream. 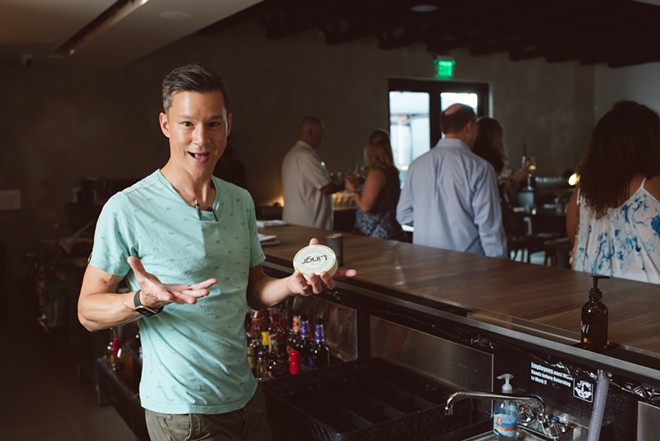 LingrRestaurant/Facebook
Lingr chef Jeffrey Jew's menu reflects his Norwegian-Cantonese roots.
We opt for chocolate. The broken kladdkaka pieces dusted with powdered sugar are surrounded by dots of wild berry compote and a generous sprinkling of toasted pistachios. It’s scrumptious and we do our best to soak up all the delicious fruit. When we’re done, the plate looks like a Chinese watercolor, with overlapping strokes of transparent glistening red berry wash and dark chocolate crumbs scattered about the plate.

Lingr, BTW comes from the “Old Norse” meaning both “belonging to” and “descending from.”

Chef Jew and his team invite us to belong—through great service and an evocative space (both inside and out) while providing cuisine exhibiting the magic combo of balance and surprise as he honors the cultures from which he descends. The results are simply a revelation. Support CL’s food critic budget by making a one-time or monthly donation, and read an explanation of the rating system. Want to know everything going on with Tampa Bay's food and drink scene? Sign up for our Bites newsletter.