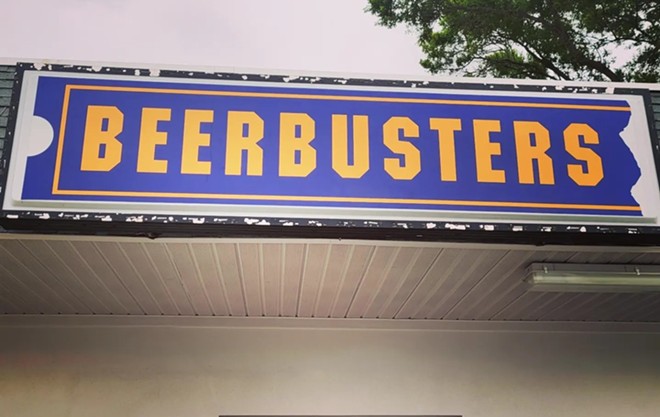 Beerbusters / Facebook
If anyone in the Tampa Bay area still has their frayed Blockbuster card, there's a Pinellas Park business created with you in mind.


Adorned with those familiar yellow walls and blue carpet, several shelves worth of DVDs and movie posters at every corner, Beerbusters is nostalgia-driven space that appeals to film buffs, craft beer-lovers and nerds alike.

Beerbusters, soon to open at 6836 N Park Blvd., is stocked with hundreds of movies, a craft beer bar, a kitchen that will dish out movie snacks, and lots of seating. There's even a “haunted hallway" to the bathroom that features old horror movie posters and a handmade coffin shelf that holds a multitude of spooky films available for rent.

“There's not a really a theme with the movies that I'll rent out, everything is just going to be a little nerdy and feature the things I'm really into," Dieli says. "I really focus on movies that I like personally, because they're easier to talk about."

He worked at a Tampa Blockbuster on the corner of Hillsborough Avenue and N 22nd St. from 2002-2009, and still has his original membership card.

The last Blockbuster in Hillsborough County remained open until 2013, but the very last Florida location of the once-popular movie rental store closed in Fort Pierce in 2015. The last remaining Blockbuster in the country, located in Bend, Oregon, can now be rented as an Airbnb.

And although Dieli is following in the footsteps of his previous employer, there will be aspects of Beerbusters that are completely unique. Dieli tells CL that the movie rental aspect is secondary to the craft beer, movie snacks, games and chill atmosphere that Beerbusters provides. 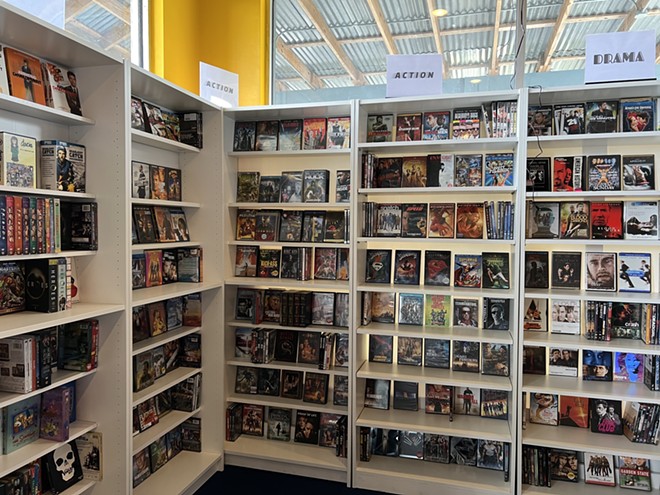 Kyla Fields
Beerbusters' wall of DVDs.
The store's massive movie stock mainly came from Dieli and his family member’s personal DVD collections. The hundreds of films range from mid-2000s comedies to superhero action movies and complete seasons of popular TV shows. It will cost $1 a day to rent any movie in the store, but he also plans to offer a movie pass, where folks can rent an unlimited amount of movies for $10 a month.

And yes, you'll be charged $1 for every day that you don't return the rented movie.

Beerbusters' "Grayskull" kitchen—a homage to the popular fantasy roleplaying game— will dish out movie snacks like popcorn, hot dogs and pizza rolls, while the bar will feature a tap list of local brews alongside canned and bottled imports, wines and seltzers.  After his business is fully up and running, Dieli also plans to expand the menu to offer more made-to-order dishes.

"I want to have beers on tap from local breweries like Magnanimous and Angry Chair, some of the more popular spots around here," Dieli says.

In addition to movie rentals and its craft beer bar, the Pinellas Park business will host events like movie watching parties, Dungeons and Dragons nights and other media-focused gatherings. Video games hooked up on Beerbusters' various TVs allow customers to  play while sipping on craft brew.

Beerbusters was initially located in Largo but after starting the opening process, Dieli says the the city wouldn’t approve his business because it was in close proximity to a church-owned property. Largo municipal code prohibits the sale of alcohol within 300 feet of any church, county-licensed child care facility or public school site, although a bar was previously open out of the same building before Dieli moved in.

Dieli originally wanted to open Beerbusters in St. Petersburg, but was deterred by expensive rent.

When Beerbusters debuts, it will be open from 2 p.m.-10 p.m. Monday-Thursday, 2 p.m. to midnight on Friday, noon-midnight on Saturdays and noon-8 p.m. on Sunday.