Unforgettable grub: What's the best thing you ate this year?

The CL staff weighs in on the most memorable local munchies of 2017. Meaghan Habuda
Big Ray's blackened grouper sandwich was so good that we even included it in our annual Food Issue.

Start talking about the Tampa Bay dining scene and the folks who help put out an issue of CL every week — both staffers and freelancers — are very likely to geek out. That's why, with 2017 coming to an end and visions of dishes past dancing in my head (come on, it's almost Christmas!), this food editor had one question for her colleagues:

What's the best thing you ate this year?

Here's what they said. 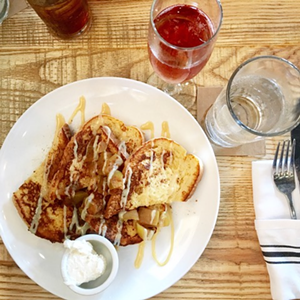 The best thing I ate this year was the apple cinnamon French toast at Boca Kitchen Bar and Market's Riverview location. I always jump at the chance to indulge in something sweet during brunch, so this was a great choice. I wish it wasn't one of the specials during my visit, because I'd order it again in a heartbeat. 11206 Sullivan St., Riverview, 813-330-7997, bocabrandon.com. —Alexandria Jones

BEYOND BURGER at THE CIDER PRESS CAFÉ

Veggie burgers sure have come a long way. Packing 20 grams of protein, Beyond Meat's Beyond Burger is the best yet. Every week, Cider Press blends these patties with other ingredients to make a creative new burger (a la Bob's Burgers, minus the animal flesh). They are ever-so satisfying. Bonus: If you're off carbs (skinny vegans are rarer than you think!), they'll serve it on Bibb lettuce leaves instead of a bun. (You can find the patties at Rollin' Oats; we recommend you ask your omnivore friends to try a bite.) 601 Central Ave., St. Petersburg, 727-914-7222, ciderpresscafe.com. —Kate Bradshaw

Are you tired of reading about this Best of the Bay-winning sando yet? Too bad. It's the top bite I put in my face hole this year. If more joints did it like Big Ray's, the grouper sandwich would be on a national map of must-have foods that people travel miles and miles to eat. Yes, it's that good. 6116 Interbay Blvd., Tampa, 813-605-3615, bigraysfishcamp.com. —Chris Fasick 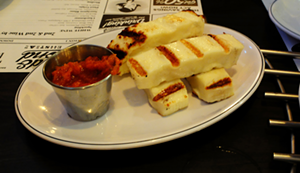 A late arrival to a year of delicious eating is the best thing I ate in 2017 — 2nd & Second's cheese sticks. After not being able to enjoy anything like mozzarella sticks for a year (fucking celiac), finding these massive spears of grilled cheese as an appetizer, sans gluteny breading, brought actual tears of joy to my eyes. 201 Second Ave. N., St. Petersburg, 727-440-4700, 2ndandsecond.com. —Cathy Salustri

Smoked salmon is one of my favorite brunch items, but mostly everyone prepares it the same way: with capers, cream cheese and some form of bagel or toast. Everyone except Bon Appétit, that is. The restaurant starts with miniature potato pancakes, dresses them with a pile of apple celery slaw, then drapes cold smoked salmon over top. Each little salmon stack is held together with a single ring of red onion. Order it as a starter before lunch or dinner. 148 Marina Plaza, Dunedin, 727-733-2151, bonappetitrestaurant.com. —Jennifer Ring

I don't know what it is about this breakfast burrito — other than what could be some kind of addictive, invisible ingredient that Mercado sprinkles into its house-made flour tortilla recipe — that makes me consistently crave its perfect combination of scrambled eggs, fresh guac, queso fresco and pickled jalapeños. But I cannot stop. I've chowed down on the thing many times over in 2017, and I'm not ashamed to say so. It's my go-to — totally irresistible. 1100 First Ave. N., St. Petersburg, 727-954-7430, redmesamercado.com. —Meaghan Habuda

By far, the halo-halo from Ichicoro Ane. Every single thing I tried at the new Station House location was absolutely delicious, but this milky, shaved-ice concoction is one of the best sweet treats I've ever had — and I'm not even a dessert person! Each spoonful of the Filipino dessert is filled with hidden surprises: crispy rice, fruit, black sesame fudge, coconut, purple ube ice cream, and more I'm sure. 260 First Ave. S., St. Petersburg, 727-300-0281, ichicoroane.com. —Alexis Quinn Chamberlain

Piccola Italia Bistro's ravioli was the best bite all year. Part of what makes this dish so good is its simplicity. Served in a glass pie plate, pillows of pasta stuffed with spinach and ricotta cheese is covered with a world-class red sauce (they call it William sauce) — all topped with fresh mozzarella. Simple and nearly perfect! 2140 W. Dr. Martin Luther King Jr. Blvd., Tampa, 813-348-4912, piccolaitaliabistro.com. —Chip Weiner

Editor's note: As more memorable munchies from the team roll in, I'll update this running list.