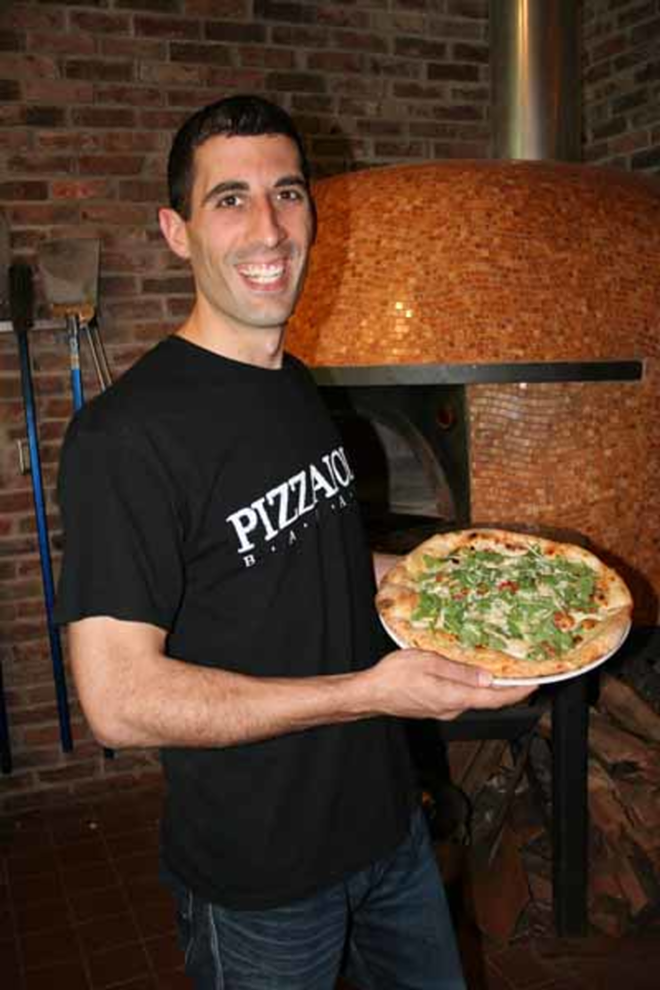 The first time I walked into Pizzaiolo Bavaro — a new pizza specialist in downtown Tampa — I'd planned on getting a pie to go, just to test it out. No dice. The server at the front door lobbied emphatically for another option. Maybe one of the restaurant's sandwich-style offerings — called saltinboca — or a calzone would be better, he explained, since the pizza is far better when fresh from the oven. When I decided to follow his advice and sit down, he looked relieved and said "trust me, I'm doing you a solid here."

And, of course, he was right.

Pizzaiolo Bavaro bases its entire menu around a beautiful, wood-fired oven placed in the back of the small dining room — the only cooking implement in the entire restaurant. From every seat you can see the crackling logs pushed to the sides of the cooking surface, flickering with flame and glowing with blazing heat that easily tops anything you can attempt at home. Pizzas slide onto the stone surface of the oven and immediately begin puffing and blistering under the onslaught. A few turns with the long metal peel and the pies are slid from the oven. From entry to exit the entire process takes less than two minutes.

And pies are obviously the star here. In an homage to Naples, toppings at Bavaro are restrained, the most basic pies receiving a few dots of fresh buffalo mozzarella and scattering of fresh herbs to accent dough covered in dark bubbles of caramelized dough and a schmear of unfussy Marzano tomato sauce.

Owner Dan Bavaro grew up around family catering and restaurant businesses, but veered left to start a limouisine company. When he sold that in 2005, and even before, he dreamed of opening a pizzeria. After touring Italy to try some traditional pies, he decided that his would be strictly Neapolitan, with a veteran from Naples to man the peel.

The resulting slices are crisp at the edges, but still flop in the center, the subtle touch with ingredients allowing all the simple flavors to call out in your mouth. Milky cheese. Bright basil. Sweet and tart tomato. That crusty and elastic dough. This pizza isn't perfect — I keep wanting a little more salt to accent the crust , and sometimes the subtlety seems more bland than restrained — but it's close, and will likely generate a regular craving among those who try them.

Other options are more hit and miss. For the saltinboca, Bavaro uses dough that puffs out to great heights in the middle while cooking. Slice it open, load it with fillings and it comes to the table like a stuffed pizza, although without the light hand shown in the pies. One has so much raw garlic it's more medicinal than tasty, while another ended up being a mere mash of melted provolone and slices of sopresssata like you'd find in a bad hoagie.

Calzones are an entirely different story, and are easily the best options in the place. Since you have a larger surface area to deal with in the folded pockets of dough, there's a correspondingly higher concentration of those tasty blistered bits on the crust. Bavaro also only loads the long side of the calzone with fillings, leaving a big flap in the front to be treated like a pizza, with the same sauce and mozzarella as the pies. Like the saltinboca, one of the calzones is loaded with sharp provolone and sopressata, but this time with just enough rosemary to scent the entire bundle with a decadent hint of herb that cuts the fatty fillings. It's a glorious package.

The salads are simple and seem a tad overpriced, but most have enough shaved parmigiano reggiano to make them worthwhile. There are also some antipasti plate for anyone who wants some substance without the dough, but that's strictly for suckers. Why go to a place like Bavaro without enjoying the fruits of the oven?

In that vein, don't skip dessert. Bavaro serves luscious gelato brought in from Duomo in International Plaza atop dense waffles re-fired in the oven — clever, but the gealto is still the star — and a massive dessert saltinboca stuffed with seemingly a jar of Nutella. The unsweetened dough — same as in the sandwiches — cuts the sweet spread a tad, but even so one slice of the six-piece dessert is more than enough.

There's a small, but tasty enough, wine selection that's reasonably priced and the servers — as shown above — have definitely bought into Bavaro's concept and food. Dan Bavaro is still tweaking the menu and recipes along with his chef, but even at this early stage this pizzeria has become the place in Tampa to go for traditional pies.