For the love of growlers: A Florida-driven growler bar is now a thing in Odessa

Brū owners Christian and Jill Brugal have made it so. 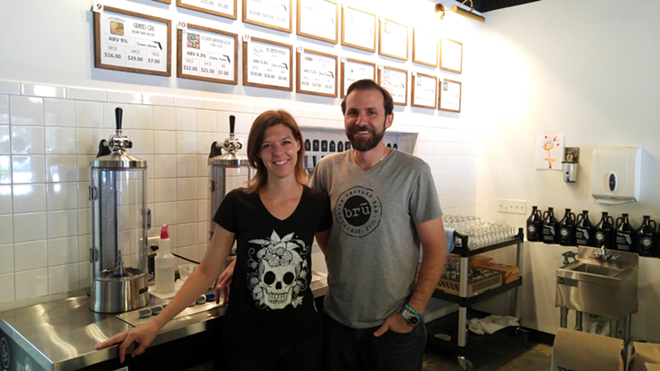 Almost half of Christian and Jill Brugal’s customers have never heard of a growler. But no matter. The husband-and-wife team behind Brū — a weeks-old Odessa bar focused on loading those colored-glass jugs with the state’s finest craft beer, kombucha and nitro coffee — aim to change that.

The idea, which Christian originally started throwing around after Florida legalized the 64-ounce growler in 2015, is to offer a lineup of liquids that can’t be found at a retail store, or even at the breweries producing them. Sixteen taps — 12 dedicated to beer, and the rest reserved for cider, mead, coffee and kombucha — rotate often thanks to Brū’s fill, drink, repeat model. A 64-ounce growler is equal to four pints, after all, which means patrons can look forward to a draft list that never gets old.

“The one thing that we are doing that’s been really helpful in introducing people to growlers is we don’t require them to buy the growler,” Jill said. Meaghan Habuda
Each growler comes with an identifying tag.

Here’s how it works: Pay a $7 growler deposit. Choose your desired 32- or 64-ounce fill, ranging anywhere from $7.50 to $34. Keep the growler, or return it and get your deposit back, or swap it for a sanitized one and refill.

“That way, too, we’re making sure the growlers are perfectly clean and not affecting the taste of the beer, so that [customers] don’t think they have a bad brew,” continued Jill, who says they have huge respect for the brewing process, which is why they take the extra step of cleaning their own draft lines. “And that’s kinda helpful because people will come and pick up four 32-ounce growlers to take to a party and know that they’re not stuck with having all this amber glassware in the house, like we have.”

While Jill wasn’t on board with owning a bar at first, she proposed their shelved project to Christian again last year. Now, in addition to creating a place with great beer that’s easier for them to frequent (hitting up breweries in locations like St. Petersburg and Seminole Heights wasn’t always possible with two kids), the craft converts — whose go-to was PBR at Boston University, where they met in business school — have brought more Sunshine State-made suds, minus the drive, to buffs and beginners in their neck of the woods at 8729 Gunn Highway. The neighboring residents, a majority of which are families, have noticed.

And how could they not? For starters, there are two “spaceships,” as the Brugals call them, behind the bar. These growler-filling machines from Pegas CrafTap, which really add a “wow” factor when lit up, extend the shelf life of a growler, allowing it to last three times as long as a fill made straight from the tap. Once the seal is broken, of course, you still have about 24 hours to drink your brew.

“In a brewery or a bar, a lot of times they’re just filling it up with a hose directly, which is fine. I’ve had many a’beer like that. Our coffee, kombucha, and ciders and meads we do with a hose because we don’t have those going through. [The CrafTap systems] are dedicated to the beer,” Christian said. “But this is essentially pressurizing and sealing at the same time, so it’s a similar process, not the exact process, to what a typical bottling or canning line looks like.”

Jill added: “It’ll purge the oxygen out of the bottle and fill it with CO2, and then it slow-fills the beer from the bottom up.”

“It lasts for — I always say two-plus weeks,” said Christian. Pints and flights are also poured at the new bar, which features a little over 1,000 square feet with 10 seats and room to expand inside and out back (the owners would eventually like to build an outdoor patio), but growlers are, no doubt, the driving force.

“Once we start reaching some of the other folks in the area, people like myself who don’t go out to bars as much or don’t frequent the breweries as much,” Christian said, “I think that’s where the growler really becomes an opportunity and education on our end, ’cause it changes the dynamic for which people can actually buy beer.”

Ultimately, the Brugals hope the bar, which has a grand opening set for Saturday, becomes a community gathering place, as well as a pioneer in a growler revolution of sorts. They’d love to help make the growler a natural part of how Floridians consume beer, according to Christian, much like folks do on the West Coast and in some Midwestern states.

“We wanna change the way people drink beer, and also how they view craft beer,” Jill said. “My hope for people is that they come in and we can remind them that craft beer should be fun. We’re drinking. It’s beer. And there’s lots of good beer. You don’t even have to be a beer drinker to come here because we have non-beer brews on tap that are also really good.”

They plan to keep their Brū enjoyable and not intimidating. For the love of growlers.