Although the main focus for the java titan is the forthcoming Bay to Bay location. 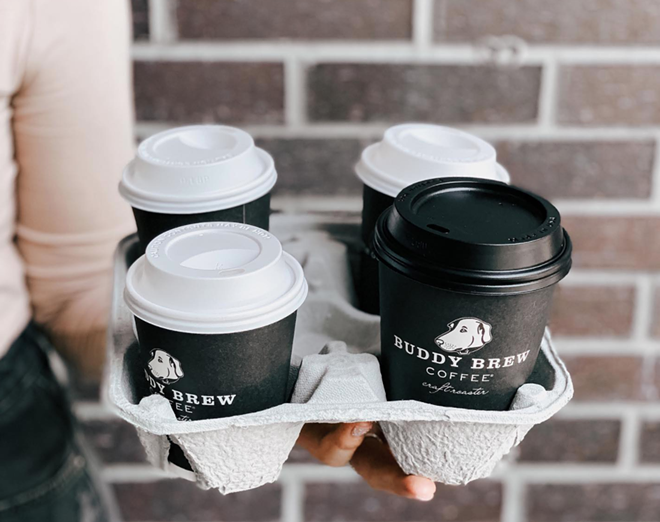 If you haven't been keeping track of the coffee shop news, don't worry, Creative Loafing Tampa Bay has, and it's been massive. Within the last few weeks, the Tampa Bay food scene has seen announcements from forthcoming coffee bars including The Chelsea St. Pete, Hot Wax, Foundation Coffee Co., as well as two freshly opened Grassroots Kava House locations (another Kahwa made its debut in Osprey, too).

As if that's not enough caffeine to go around, local java titan, Buddy Brew, is launching another location in St. Petersburg. Up until the announcement of the 'Burg location, St. Pete's coffee lovers have had to secure the beans at various locations in Tampa (or the lone location in Sarasota). According to local blog, St. Pete Rising, the new Buddy Brew is setting up shop within a 1,820-square-foot space at 2424 4th St. N. with an undisclosed opening date.

However, a rep from Buddy Brew told Creative Loafing Tampa Bay that right now Buddy Brew's main focus is on a Tampa location that's almost open in Palma Ceia. The location, at 3302 W. Bay to Bay Blvd., shares space with the already open, Chill Bros. Scoop Shop. While there have been some difficulties, that Buddy Brew expects to open in the coming weeks.

Since 2010, owners Dave and Susan Ward have been busy growing a cult following, launching multiple locations as well as linking with wholesale retailers like Publix and Whole Foods (the pair even gave free coffee away to members of the media during the early days of the pandemic). As far as shops go, Buddy Brew has nestled into some of the coolest neighborhoods in Tampa like Hyde Park Village, downtown Tampa's Park Tower, and Oxford Exchange. The menu consists of espresso drinks, matcha, tea as well as a lineup of bites like salads, sandos and loaded toast.  If you're not quite ready to hang and sip, Buddy Brew also has an app so customers can order ahead and grab their caffeine fix on-the-go, or get it delivered through Grubhub.