And yes, you can pay with credit cards now.

Photos via Cappysseminoleheights/Facebook
Cappy's Pizza in Seminole Heights
On April Fool’s Day, nearly 16 years after he opened Cappy’s, Scooter Gabel signed ownership of his Seminole Heights pizza spot over to new owners. But regulars will probably recognize their faces.

Together, Marty Iglesias, Frank Cinerar and Kevin Coss have nearly 30 years of experience tossing pies at the rocketship-adorned restaurant at the corner of N Florida Avenue and W South Ave.

Iglesias thought Seminole Heights’ Cappy’s, which is one of five independently-owned Bay area locations for the local chain, might have to move, so they scouted a few locations, but it turned out that they could stay at the 88-year-old former grocery store. 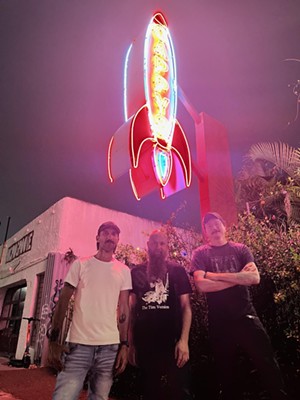 While Gabel took a few of the things that belonged to him like arcade games, pinball machines, those scooters on the wall, Iglesias and his partners made immediate changes of their own.

Most notably, customers can now pay with credit cards, order online and even get pizza delivered via UberEats. That means no more handwritten tickets, either.

“Yeah, some of those arcade games just didn’t belong to us,” Iglesias told Creative Loafing Tampa Bay. “But we’ve already bought a couple and plan to get more. Plus, I wired the old cash register to open when we complete a transaction on our new POS.”

The new owners also built a bar top at the window facing Florida Avenue—and yes, you can still grab your own beer out of the reach-in cooler in the corner of the restaurant.

“Right now, you’re going to be watching some construction out there on the road,” Iglesias said, referring to a three-week Florida Avenue closure between E Osborne and Hillsborough Avenues.

“The neighborhood folks know how to get here, there are other avenues, and we’ve got online ordering for takeout now, too," he said.

Iglesias says the record cover menus are coming back shortly, along with a few menu tweaks and specials, but in the meantime, the new owners emphasize that the Cappy’s that the neighborhood has come to know and love is still the same.