Find your happiness point: It just might be at this interactive cocktail class 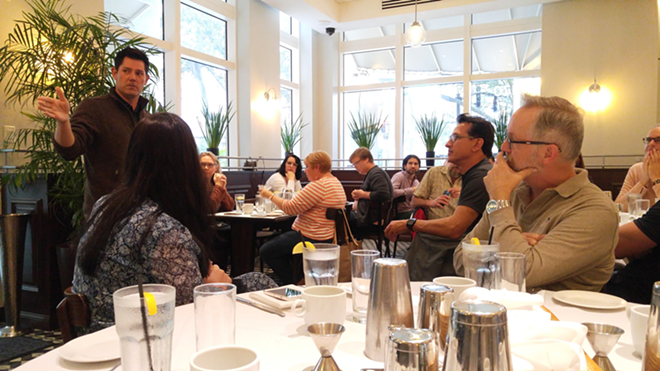 You know how the doc could write you a prescription for whiskey back in the day? Well, on Sunday — during the most recent installment of Cassis’s Sunday Stir — this little tidbit from Michael Selby, sales brand ambassador for the Sazerac Company, couldn’t have been more timely.

I mean, even though whiskey prescriptions aren’t a thing anymore (remind me why again), at least a few of the drinking enthusiasts who attended the bourbon-driven cocktail class had to have been using it as a way to nurse their post-Gasparilla hangovers… 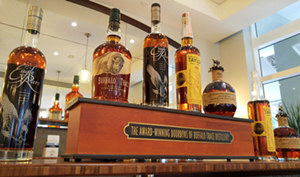 The Sunday Stir isn’t a new event series for Cassis, which underwent a major remodel last year. However, there is a different theme in the spotlight every month. Not to mention, these interactive bartending workshops, especially Winter Bourbon (the one hosted this past weekend as rain bombarded downtown St. Pete), are the epitome of Sunday Funday.

Led by Selby and Cassis bar managers Christophe Guillot and Adam Graves, our lesson on Winter Bourbon featured four recipes made with four members of the Buffalo Trace Distillery family: Buffalo Trace, Eagle Rare, Colonel E.H. Taylor and Blanton’s. Selby discussed everything from the still-booming category that is bourbon to tasting notes, while us guests chowed down on the cocktails’ respective food pairings, prepared by executive sous chef Trevor Lyman, in between convivial conversation.

First came the ultra-refreshing blackberry rosemary bourbon smash with what was essentially an elevated breakfast platter (who could resist a mini pancake, hash brown and pork belly combo?), followed by a classic New York Sour with cow’s milk cheese, crostini and almonds (my favorite of the night). And while Ruby Cubes — a tall order poured over cranberry ice cubes and accompanied by salted caramel popcorn — and the soul-warming bourbon apple cider with sweet potato fries rounded out the workshop, we took the reins on this final duo of drinks.

The aforementioned cranberry ice cubes were provided to us, as was the house-made cider ladled atop our shot of Blanton’s in a coffee cup. But we did use those cocktail shakers, jiggers and strainers on the table when it came time to mix together Ruby Cubes — after a quick tutorial, of course. I had fun measuring out the short list of ingredients — 2 ounces Colonel E.H. Taylor + 1 ounce orange juice + 3/4 ounces ginger + 1/2 ounce lemon juice + 1/4 agave — and waving the shaker-contained concoction around in the air, then into a Collins glass, with my tablemates.

That said, if you’d rather have Guillot or Graves make the boozy treat for you behind the bar at Cassis, Ruby Cubes is offered on the regular cocktail menu with Four Roses. 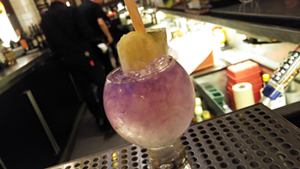 Other drinks worth checking out include The Snowbird (Ketel One Vodka, fresh pear juice, honey, peach bitters, lemon foam) and The Gin! Gin! The latter — which was previously part of the Beach Drive restaurant’s build-your-own cocktail program and is an all-around great choice in my book, mostly because Empress 1908 Gin and elderflower tonic from Fever-Tree make it reminiscent of a G&T — is garnished with a Kaffir lime popsicle, an intriguing, made-in-house draw in itself.

According to Guillot, lots of time and preparation go into building each cocktail.

“But everything we do is fun,” the bar and wine manager continued, “even the popsicle.”

It’s clear that a similar thoughtfulness is incorporated into the Sunday Stir, and I think this quote from a fellow guest sums up our evening quite nicely: “I’m at my best happiness point right here.”