Their brewery celebrates its grand opening this weekend.

After a decade or so of living in the cozy Tampa neighborhood—and at the start of the Covid-19 pandemic in 2020—they took a chance by purchasing a notoriously-vacant warehouse space at 5023 N Florida Ave.

Kendra already knew she would move her Health Mutt pet store there, but while sitting at home with a newborn and toddler, her head filled with even more grandiose ideas and designs for their then-empty warehouse.

Two years after their purchase—following months of construction-related delays, total renovations and DIY decor—her lofty ideas have finally come into fruition, as Common Dialect brewery and taproom is finally ready to open its doors.

“Although we thought we were going to be open about eight months ago, everything really came together the way we originally envisioned it,” head brewer Mike tells Creative Loafing Tampa Bay. After this weekend’s debut, the brewery will continue to host different food trucks throughout the week, but will keep live music reserved for special occasions.

Adorned with a colorful and massive, floor-to-ceiling mural by Tampa artist Conrad Garner, tabletops made out of vintage bowling alley lanes, homemade decorations and tons of natural lighting, Common Dialect has a familial and welcoming feel for all walks of life.

“Whenever I was trying to plan what the space was going to look like, I thought a lot about how I wanted to feel when I stepped inside. The goal was to invoke an emotion from the customers,” Kendra—who brings her retail experience to the craft brew world—explains. “Of course, we’ll have really good beer, but bigger than that, we wanted to create a space where people feel like they belong.”

Far from the minimalist and industrial-feeling breweries that Tampa Bay is certainly familiar with, this new Seminole Heights taproom is somewhere you’d want to bring your family, friends, and most importantly—dogs.

Since it’s right next to Health Mutt, Common Dialect will absolutely be pet-friendly, complete with a turf-lined outdoor patio. She tells CL that dog-centric events, like breed specific meetups, might be on the horizon for Common Dialect as well.

Another aspect that makes Common Dialect stand out amongst the rest is the big ass parking lot it shares with Health Mutt (besides Angry Chair and the in-progress Florida Avenue Brewing Co., a rare sight in Seminole Heights).

Last summer, Health Mutt re-opened next to the brewery, just a few months behind schedule. Common Dialect however, will debut almost a full year after it was originally slated to.

But after almost a year of meetings, inspections and reviews with the City of Tampa, the Florida Avenue brewery is finally ready to build its reputation as one of Seminole Heights’ friendliest breweries.

Out of its roughly 2,000 square-foot production space, co-owner and head brewer Mike plans to pump out a well-rounded selection of popular beers. After quietly shuddering at the loaded question “What’s your favorite beer?,” he tells CL that he wants his community to dictate the beers that Common Dialect specializes in. 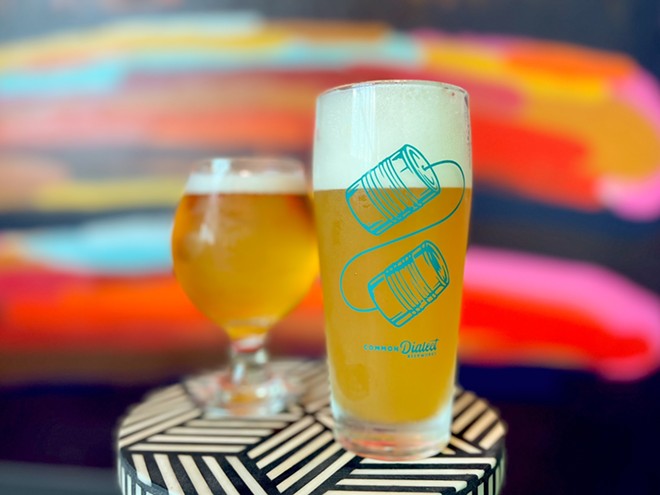 Photo by Chynna Ratner
“Our goal is to be the neighborhood brewery, very focused on the community and what they want to drink,” he says. “ I want the opportunity for everybody to try something different and feel good about it…I don't want to pigeonhole myself.”

Gaining a bulk of his experience from Lakeland-based production facility Brew Hub—where he started out in packaging and left as a head brewer—Mike will dish out a variety of pilsners, stouts, barrel-aged brews, fruited sours and whatever else his regulars want to pour down their throats.

There’s also a possibility that the brewery will produce and sell its own coffee sometime in the future.

Until its production is fully up and running, he says that Common Dialect’s 18 taps will be filled with beers from other breweries as well, including a recent collaboration he did with St. Pete’s Grand Central Brewhouse.

Finding a location for Health Mutt and Common Dialect that was in their own neighborhood was absolutely paramount, as the two can now walk a few blocks from their house to both businesses. But as Kendra says, the duo didn’t necessarily choose the cheapest real estate.

With taproom chairs painted by their parents and floors that their two young children have grown up playing on, this Seminole Heights brewery has proven to be a true labor of love.

“Our decision to open Common Dialect wasn’t motivated by it being a good business decision, we did it because we wanted to invest in the neighborhood that’s given us our livelihood,” Kendra tells CL.

After this weekend's grand opening, Common Dialect will be open from 2 p.m.-8 p.m. Monday-Wednesday, noon-10 p.m. Thursday-Saturday and noon-8 p.m. on Sundays.