'Florida Special Lager' will be available at home games and at select restaurants and retailers. 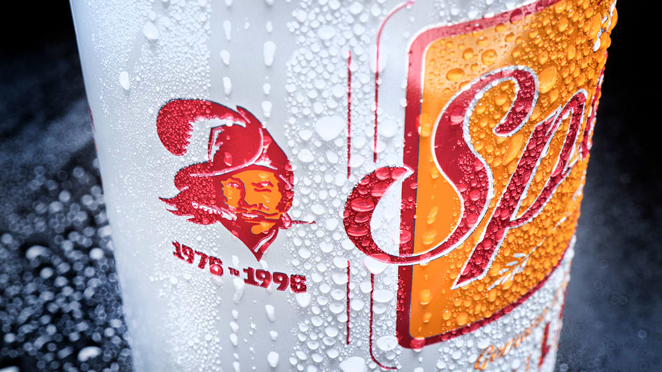 Last month, Coppertail Brewing Co. tapped a Creamsicle Florida Weisse in its Ybor City taproom, and while you’ll have to go on site to taste it, the Tampa brewery is going to be a major presence at Raymond James Stadium during Buccaneers home games.

Yesterday, the Tampa Bay Bucs announced that the team has partnered with Coppertail to brew a different beer, the “Florida Special Lager,” which will be available at Raymond James Stadium in limited-edition, commemorative 16 oz. creamsicle cans complete with the Bucco Bruce logo. Select 12-packs of the American style lager will also be available at restaurants and retailers like Publix.

Fans can get the beer at Coppertail’s new stadium bar in the east concourse of Raymond James and throughout the venue, but that’s not all that’s new on the menu for Bucs fans.

Yesterday, the team announced additions to the stadium platter during a press conference, including items from Outback’s Aussie Grill, Little Caesars, Winghouse and Vizzy.

"We're so excited that the Buccaneers have chosen to partner with a small, local, independent craft brewery like us," said Kent Bailey, Founder and President of Coppertail Brewing Co, said in a release. "It really shows their commitment to this community and promoting an authentic craft beer experience at Raymond James. We still make 100% of our beer right here in Tampa, like we have from day 1. I think it's really cool that the brewers who make the beer will be the same people in the stands cheering for the Bucs on Sunday."