Tampa Bay's high price tag for eggs actually ranks as the third highest in the country. 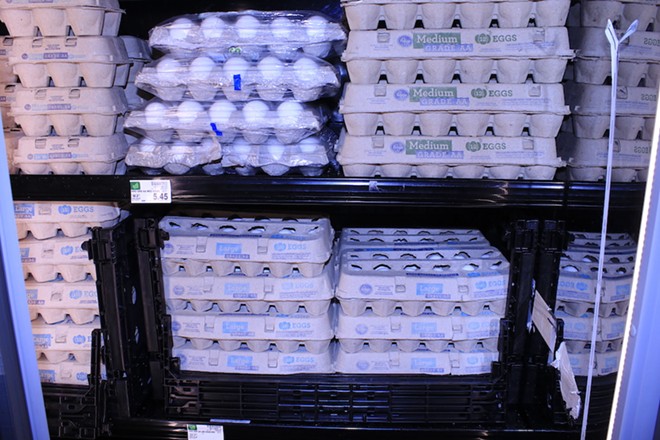 PHoto via Adobe
With an ongoing housing crisis and an increasingly squeezed middle class, Tampa Bay residents are quickly approaching the point in history where the general proletariat often resorts to throwing cheap, and  sometimes rotten food, at the Bourgeoisie.

However, if you're going to whip any grocery item at a local rich fat cat, maybe don't reach for an egg.

According to a study released today from online grocery delivery platform Instacart, shoppers in the Tampa Bay region are now paying an average of $6.27 for a dozen eggs, which is an 18% increase from last year.
click to enlarge Image via Instacart
Tampa Bay's high price tag for eggs actually ranks as the third highest in the country, behind only Miami ($6.67) and San Francisco ($6.27), says the report.

But Florida as a whole is a terrible place to buy eggs. The study ranks the Sunshine State as the  second most expensive state for eggs, with an average of $6.36 per dozen. Only Hawaii has more expense eggs, with an astronomical $9.73 per dozen, says Instacart.

Inflation has certainly raised the cost of most goods at your local grocery store, but the price of eggs recently spiked across the country due to the spread of an avian influenza virus, according to the Centers for Disease Control.

According to Instacart there are quite a few grocery items currently cheaper than eggs. So for the time being, rather than tossing an egg, search for a more budget-friendly projectile, like a tomato ($1.79),  or get creative and consider a dozen Sargento Natural String Cheese Snacks ($5.87), or  a bag of four Haas avocados ($5.53).

Colin Wolf has been working with weekly newspapers since 2007 and has been the Digital Editor for Creative Loafing Tampa since 2019. He is also the Director of Digital Content Strategy for CL's parent company, Euclid Media Group.
Scroll to read more Food News articles