The younger sibling of Engine No. 9 opened to the Grand Central District in late 2014. 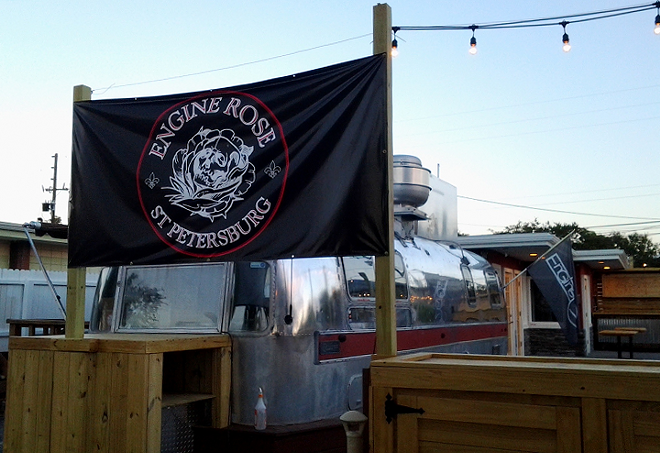 Like the shiny new developments moving into Tampa Bay neighborhoods such as Ybor City, it seems like shuttered restaurants — among other things (saturation, perhaps?) — have started to become a symptom of St. Petersburg’s growth. Jason Esposito, the chef-owner behind Engine No. 9, touched on this growth in the wake of an announcement about his second restaurant, Engine Rose, permanently closing.

The 3-year-old Grand Central District eatery, which was originally slated to reopen at the end of the month after kitchen repairs, served up a similar menu to its beloved EDGE District sibling out of an old-school Airstream trailer at 2901 Central Ave.

“We want everyone to know that it came down to our lease extension and decided not to renew at Engine Rose. We enjoyed our 3 years there and all the great people we got to serve. With all the friends we have made it was difficult to make the decision not to renew. Rents are changing and the city is on a fast track to grow which is a catch 22,” Esposito wrote on his Facebook page Aug. 9.

On Wednesday afternoon, Esposito elaborated on what he said last week, telling CL in a message that the lack of development on Engine Rose’s still-up-and-coming end of Central Avenue led to the tough decision not to renew. Instead, he and the team will focus their energy and investment into the flagship, whose rent, he says, is inevitably going up.

“When we first looked at property for Rose, the demographics looked good, and some of the blueprints I saw for expansion down Central really looked promising. Three years later, no development was happening, and it’s like the city cleaned up to 27th then forgot about the rest of the street,” he said. “When it came down to renewing and spending more on my building while the city, I feel, hasn’t put their part in, it just wasn’t worth it.”

Ultimately, rent issues — an oft-assumed culprit in a burgeoning community — weren’t the cut-and-dried reason for the closure. CL also spoke to Bill Hillman, owner of the 2901 Central property, who says he had the opportunity to raise Engine Rose’s rent, but that it wasn’t a part of the lease renewal conversation yet. Higher bills and rents all around do come with city growth, though, as the No. 9 founder put it.

A saturated (there’s that word again) restaurant scene doesn't help much, either.

“Oversaturation makes it easier to run one place with everything you got and give customers a great experience. I believe very few people out there are lining their pockets while small business loses out. So every decision becomes so crucial, and you got to walk a fine line,” Esposito said.

On another note: Engine No. 9 is actively looking for another location outside of St. Pete. There’s no timeline or anything, though; that’s a project for the future. Esposito says they have a “one-No. 9 mentality” right now, and that you learn to take these things day by day.

Launched in late 2014, Engine Rose aimed to accommodate families and dog owners with its large outdoor seating area. The restaurant took home at least two awards from CL’s Best of the Bay in 2015 (plus a glowing review from our restaurant critic) — Best Carnival Food Not at a Carnival for its funnel cake fries and Best Thing to Happen to an Airstream — and also offered a strictly-Benedicts brunch service on Sundays that was super underrated.

Here’s to hoping some of Engine Rose’s popular menu items live on at No. 9, which is in lease negotiations to extend past 2018 in the EDGE District.

“I believe No. 9 has become a big part of this town, and we love where we are,” Esposito said. “Buildings are being bought and sold so fast that you got to stay on your toes.”