Construction on Riverview's Boca Kitchen Bar and Market continues, plus more in food and drink. 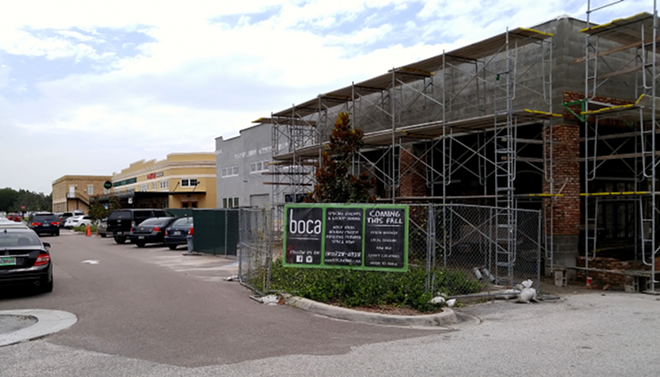 
Construction on the third eatery from Boca Kitchen Bar and Market is coming along at the Winthrop Town Centre in Riverview. Neighbors with the Egg & I and Ciccio Cali, the newest Boca is slated to open in fall.

The New American farm-to-table restaurant, whose older siblings are headquartered in South Tampa and Winter Park, will feature a local, organic ingredients, a raw bar and craft cocktails.

•  In the last three months or so, two restaurants have launched in the Gateway area of St. Petersburg. A Japanese steakhouse and sushi restaurant, Got Sushi? highlights nearly 15 combo entrees, desserts like green tea ice cream and a variety of sushi offerings at 1100 94th Ave. N. The sushi rice incorporates a blend of Japanese short- and long-grain rice, and wine and sake are also featured.

• Pinellas Park's Clay Oven moved to 9047 Dr. Martin Luther King Jr. St. N. with its traditional Indian specialties and daily lunch buffet, plus pasta, pita sandwiches and other global favorites. With a stronger bar-lounge feel, the dining spot offers happy hour from 4 to 6 p.m. and a live DJ on Thursdays.

• At 777 N. Ashley Drive in downtown Tampa's Skypoint building, Falafel Inn Mediterranean Grill replaced Kurdi's Fresh Mediterranean Grill with new ownership and a fresh name. The restaurant specializes in authentic Middle Eastern tastes, ranging from starters to platters to desserts, and many dishes that were offered at Kurdi's are available as well.