Two local entrepreneurs are behind Flûte, a haven for Champagne, sparkling wine and food. 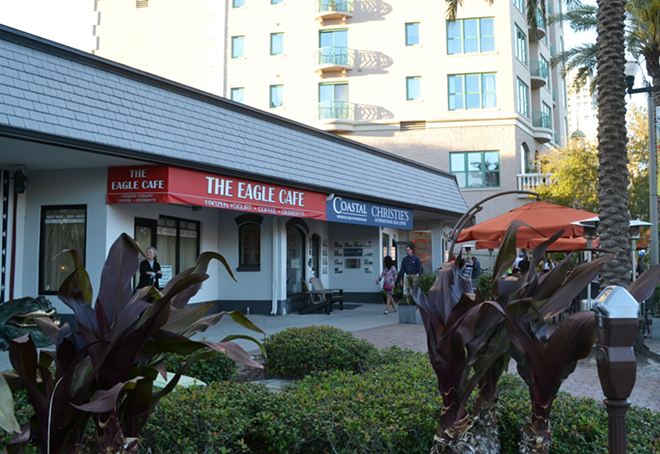 Ryan Ballogg
Flûte will take the place of the Eagle Cafe, a frozen yogurt shop on Beach Drive.

A bar specializing in all things bubbly plans to open in April along downtown St. Pete's buzzing waterfront. Dubbed Flûte, this haven for Champagne, sparkling wine and decadent food is the concept of a duo who talked about joining forces on a venture together for years.

"It was like chocolate and peanut butter," according to Haddad.

As St. Pete has boomed and become a bigger travel destination, he and Mangiafico have watched their businesses grow, and been rewarded for sticking it out through times that didn't look so promising. Courtesy of Greg Haddad
Flûte's Tony Mangiafico and Greg Haddad, who playfully call themselves and their friends "the fools of St. Pete."

The entrepreneurial pair weren’t quite sure what form their partnership would take. Then they picked up on a recent revival nationwide: an interest in bubbly. "Champagne and prosecco are huge right now," as Haddad puts it.

Last year, a trip to Italy, where the friends did some research of sorts in Mangiafico's hometown of Syracuse, Sicily, sealed the deal.

"We tried a lot of good prosecco," Mangiafico said. "We also visited a market where everything is fresh out of the boat. They let you try everything. They shuck you an oyster and hand you a nice glass of prosecco. It would be nice to bring a little bit of that here."

The new bar at 234 Beach Drive takes the celebratory and decadent nature of the duo's other businesses to a new level. Primarily featuring sparkling wine by the region (think Champagne, prosecco and cava), Flûte is set to carry some non-bubbly, ports and a few beers, plus spotlight high-end Champagne by the glass and flight — not just by the bottle. The pair will retail hard-to-find cigar brands and offer patio seating for smokers as well.

Haddad says their front-of-house staff will be well-versed in sparkling wine's many forms and price points, ready to educate patrons as much, or as little, as they please on what's in the glass.

Orchestrating the food side of Flûte is Mangiafico, who's imagining a variety of gourmet plates, mostly cold, to complement Champagne. Dishes, including tartare, pâté, cheese and caviar, will cost $8 and up, with espresso and desserts also planned for the menu.

For Mangiafico, the unusual — prepared well — is part of having a memorable culinary experience. He's made a career out of turning uncommon ingredients into centerpieces for dishes. Buffalo, rattlesnake, and a huge variety of shrimp from Spain known as gamba are a few that've appeared on his guests' plates, never hidden in sauces or overcomplicated.

"The best food is the simple food," the chef said.

Haddad and Mangiafico hope Flûte appeals to locals and travelers alike as a relaxing place to go for a special occasion and before or after a big meal.

"We want it to be elegant but accessible," Haddad said.

That setting will be reflected in the décor and atmosphere of the bar, where they aim to hang a chandelier and showcase instrumentalists playing harp, cello and flute. The friends are looking forward to realizing a longtime dream in their favorite city.