Growth on the rise: Jamison B. Breadhouse Bakes expands in Ybor City

Two years and more than 18 accounts later, the wholesale bakery is ready to grow.

Two years of kneading bread and feeding dough starter has led to an expansion for Jamison B. Breadhouse Bakes. The Ybor City wholesale bakery, whose 18-plus accounts include Tampa Bay restaurants like The Bricks, Rooster & the Till and The Refinery, found its new home just a hop, skip and a jump away from the bustle of Seventh Avenue.

For owners Jaime and Jason Laukhuf, the neighborhood relocation is the result of their teamwork, which started in their home and two Tampa eateries: Sunday's Delicatessen and Cena. The couple's new building, located at Seventh Avenue and 36th Street in the industrial district of Ybor, provides Jamison B with almost nine times the amount of space.

"Growing pains are good pains to have," said Jaime, who speaks about how manifestation, positivity and "good witch stuff" has helped them grow.

A move from the kitchen at World of Coffees & Tea (formerly Joffrey's) wasn't exactly the Laukhufs's plan. But it was something that needed to happen. "After continual building and landlord issues," as Jaime tells it, "it was no longer a place we could operate efficiently out of."

"When you are forced out of a shop that has become your home for two years, you do what any motivated entrepreneur with an awesome product does," she said. "You go big or you go home."

According to Jaime, Jason is the "mad bread scientist" whose "bread is art," while she spearheads the business side of the bakery, which is named after their 4-and-a-half-year-old son Jamison Blue. Jason, who likes working with ancient grains and wild yeast, says cooking on the line is very different from baking, because it requires more preciseness and there isn't as much freedom. 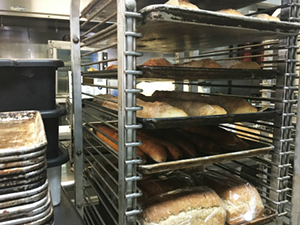 Shelbi Hayes
Jason bakes a little of everything, from ciabatta and French baguettes to sourdough and rolls at the tables of local spots like On Swann.

Jason caught the bread bug a couple years ago. That was when he started to bake on weekends while teaching courses at Keiser, and even flew out to California to hone his bread-baking skills. Word-of-mouth was the primary way Jamison B captured the attention of kitchens around town. And from there, the accounts rolled in.

"We built up to it," Jason said. "We built our brand by infecting the market."

He's working on a process for sourdough bread that allows gluten-intolerant people — not those with celiac disease, however — to enjoy bread. The duo says a local doctor is testing the long-fermented sourdough at home with his gluten-intolerant son, who's said to be reacting well.

At their larger digs, Jaime, who used to perform as singer Jaime Z at Czar and the Amphitheatre, is set to commission some of her artist friends — including Ginger Shaw, Lana Nonstop, Efren Rebugio Jr., Cam Parker, Bekky Beukes and Emily Tan — to jazz up the space from wall to roof. The building will get rooster-fied inside and out, with murals, art and maybe some taxidermy roosters from Dysfunctional Grace Art Co., after Jamison B relocates. To continue to support the arts, the Laukhufs, hoping for a move in by March 1 (pending city permits and inspections), want to bring art shows and other events to the property's outdoor patio.

The couple knew they wanted to stay in Ybor, but the main drag of Seventh Avenue is pricey, especially with kitchens in high demand in Tampa. Jaime found their new location "on a fluke," and the extra square feet, 2,000 compared to 400, allows the bakery to grow as more accounts and employees come in. Though she and Jason handle much of the work, they also have a delivery driver and three part-time baker's assistants. The Laukhufs can give their crew more hours with the added space, and have the potential to bring on additional people in the future.

Plus, Jason has dreamed of a "bread sanctuary and lab," as he puts it, for quite some time. He wants the property, where he aims to host classes for the Bread Bakers Guild of America, to be a welcoming spot.

While the expansion means more opportunities for Jamison B and the Laukhufs — who plan to hold a charity event for their grand opening and also tell CL they're working on a fast, casual, bread-based restaurant concept — it means that a halt in participation at the monthly Tampa Indie Flea is likely as well. However, Jaime says she hopes the new location will eventually lead to more markets and bread pickups.

Shelbi Hayes
Right now, Jamison B's new location is a bit boring. But Jaime hopes the artists and interior design of their bakery will attract others across 21st and 22nd streets, helping to liven up the industrial district.