Have a scoop of Butter PeKanye

Bluelucy’s Sup Cones show is all about hip-hop and ice cream. 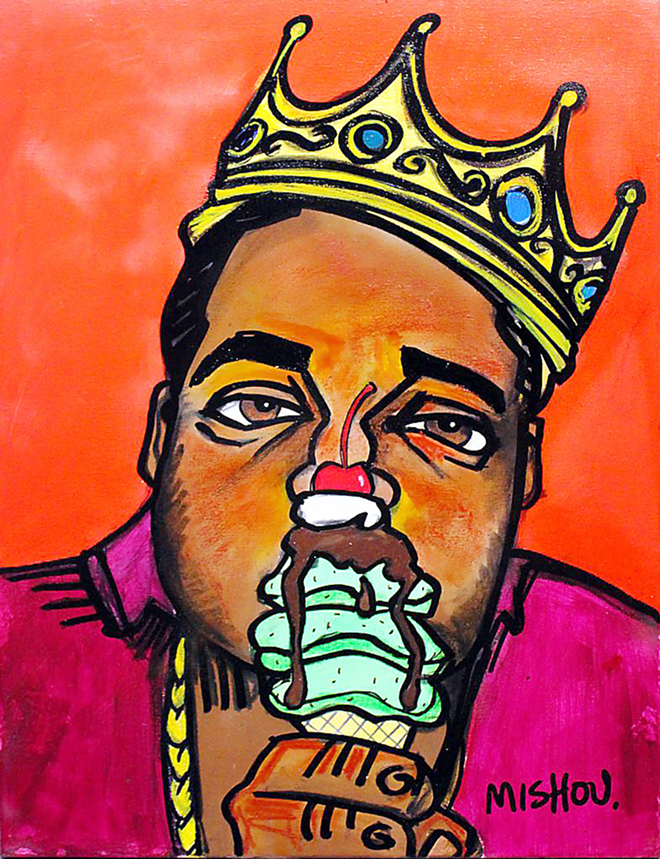 Bluelucy owner Chad Mize says he and local DJ Lady D were headed to Wings and Things in Clearwater, jamming to hip-hop tunes, when the idea for the gallery’s latest show, Sup Cones, arose.

“We were talking about opening a hip-hop ice cream shop,” Mize says, sipping his chocolate peanut butter milkshake at the Dairy Inn. “It’d be Sup Cones, and we’d have flavors like Butter PeKanye or the Lil’ Kim — served in a pasty.”

They kept brainstorming flavor names: Aesop Rocky Road, Hard Out There for a Drip Cone, and Strawberry Shortie.

When he got home, Mize checked to see if the SupCones.com domain was available.

“It was, and so I immediately bought it and thought, ‘Let’s do a show,’” Mize says. “It’s the perfect summertime show and the artists have been really receptive.”

Sup Cones has 36 different artists or “flavors,” Mize says smiling. They include BASK, the Vitale Brothers, and Frank Strunk III.

Mize says the show will feature the largest number of female artists ever to participate in a Bluelucy show, including Mishou Sanchez, Joanna Ledingham, and Lauren Rasch.

Dairy Inn is bringing a cooler and hand-dipped ice creams to the opening on Saturday, July 20. Each ice cream flavor will have a name tailor-made for the night, undoubtedly from the ever-growing list of hip-hop-themed flavors Mize continues to craft and quaff.

Inside the enormous gold “DJ cone” — a DJ booth built to look like an ice cream cone — Lady D, DFunkDamager and Delly will spin hip-hop tracks all night long.

“Normally, I think the live music element takes away from the art,” Mize says. “But this was more about the festive vibe. It’s about creating a real hip-hop ice cream shop.”

And Mize says live DJs and records will keep turning throughout the run of the show, which closes August 17.

“I might even get behind the decks myself,” Mize says. “I just want it to be fun for everyone.”

As a kid, Mize loved ice cream, ordering blizzards with Nerds or Life Saver candies at his hometown ice cream shop Wizards in Bradenton. So maybe Sup Cones is slated to become more than a one-time attraction at Bluelucy.

“I’ve thought about a hip-hop ice cream truck with spinning rims,” he says, finishing his milkshake. “Maybe this will actually become something.”