Here in Florida tiki isn’t canceled, but it needs a major tune up

International Tiki Day is on Aug. 14 across Tampa Bay. 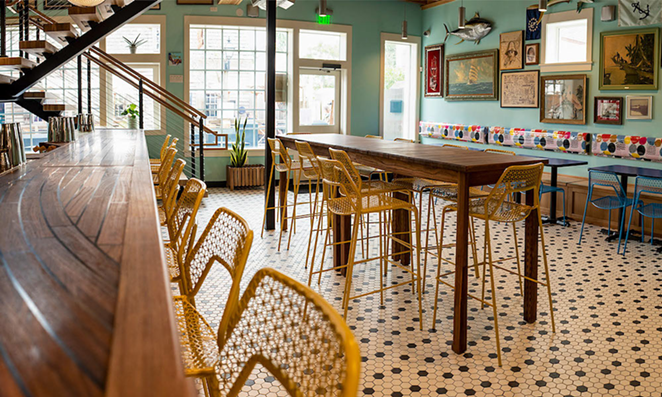 Visit St. Augustine
St. Augustine’s Boat Drinks is one of the few Florida tiki bars that does it right.

Gearing up to celebrate International Tiki Day—the second Saturday in August—might look something a little like this: A bar outfitted with palm fronds, wooden tikis, and Polynesian knick knacks, sunburnt necks adorned with plumeria and orchids, tropical drinks carved out of Easter Island heads overflowing with overproof rum, citrus, mint, and elaborate garnishes. In some cases you might even get a dolphin carefully molded out of a banana. But beyond the Hawaiian getaway and tiny cocktail umbrellas lies quite a bit of malice and misinformation, along with a conversation raging between the old guard trying to preserve the “culture” of tiki and the new school claiming it was never theirs to begin with.

Before revolutions and civil wars, there was rum. And while it’s easy to think that we have been, and always will be a whiskey drinking town, it is important to understand that this wasn’t always the case. Well before whiskey came into its own, rum was king in the colonies. And while rum fell out of favor for more than a century, its resurgence in the 1930s brought a tropical escapism and a fervor for all things island mystery, mostly in part to notable bar owners Donn Beach (of Don the Beachcomber fame) and Victor Bergeron (Trader Vic’s). Once U.S. servicemen stationed in the Pacific throughout the ‘40s and ‘50s began returning home, they helped fuel a postwar tiki craze that would last the next few decades. And while tiki bars eventually lost out to disco drinks, the just-call-it-a-martini era, the neo-speakeasy era, and the craft beer boom, it has made a resounding comeback in the last decade.

Tiki bars seem to be popping up everywhere these days, taking advantage of the tropical climate Florida boasts all year long. Many of them offer a uniquely kitschy approach to their island-tinted drink and design, but rarely do they provide any form of context on what their design and menus are based on; instead they mash up a melting pot version of Pacific and Asian foodways in a shadowy world of cultural appropriation and lack of representation. While this seems like a bold accusation for an establishment serving up frozen mai tais and BBQ spare ribs, many seem to believe these traditions could be better thought out, and much more inclusive.

“There’s so much that goes into what it takes to make a tiki bar: the aesthetics and service style, the music, and the whole culture around it, but it has definitely gotten lost in the American pop culture by taking advantage of it and making it this style of a kitschy party vibe,” says Whitney Hobbs, co-owner of the tropical themed bar Boat Drinks in Historic St. Augustine. “When you’re doing it right and educating people about it on your menus, being very vocal about your stance, it can have a cool place in our industry.”

Many tiki establishments are starting to feel the backlash from people who feel underrepresented, while tiki’s prominent figures claim to merely be trying to save a drinking style and culture from extinction. But at what cost? Is there a way to bring a tropical style of drinking to people who appreciate it, without reducing the indigenous cultures of Oceania to a few cheeky mugs or an arbitrary painting on the wall?

Ravaging cultures is practically built into rum’s DNA. When the Carribean was first colonized, rum—and its raw materials sugar and molasses—played a major role in a deadly triangular trade that is thought to have captured and sold over 12 million Africans. Not until Great Britain imparted heavy taxes on sugar paired with a growing resistance did the triangle finally fall apart. Just as recently as 2016, the powerhouse Nicaraguan rum company Flor de Caña was the target of a nationwide boycott by bartenders across the country. Exploited workers given little water, rest, or shade were dealt with the difficult and sometimes deadly task of harvesting vast amounts of sugar cane for little pay. To consider the plight of all those affected on the pathway of these foodways from the birthplace to your favorite bar seems like a small ask.

“Living in Florida I hate it more,” Hobbs, from Boat Drinks, adds. “There are so many places that Disney-fy it, they just do it because it’s cool and have no understanding of it and are just there for the aesthetic. Martin Cate (Smuggler’s Cove, San Francisco) does a great job and very much educates the patrons through his menus, while the bartenders are well informed enough to discuss the themes with guests. It’s very similar to Jeff [“Beachbum”] Berry and Latitude 29 in New Orleans. That’s how he started, by teaching himself and getting educated. When it’s in a landscape where the staff and the creation of it are genuine, and everyone is there because of the love of the culture and how these drinks came to the U.S. it feels different, because the story of how it all came here is pretty fucking cool.”

I’ll be the first to admit that the story is fucking cool, and the drinks are fucking delicious. Some believe this melting pot paradox is exactly what should be celebrated—an exotic yet familiar American invention all thrown in the blender behind the bar. So should talk of appropriation and political correctness make its way into every ounce of rum we drink, or is this another example of cancel culture erasing yet another thing we love? I’m probably the least qualified person to answer these questions. I don’t think tiki is canceled, just in need of a major tune up. Displaying historical curiosity and showing sympathy to marginalized histories and communities would be a good starting point. Do your homework while supporting networks of representation (pasifikaproject.com is a great place to start), and the next time your local tiki bartender slides a frosted Nui Nui or hand shaken Mai Tai across the bar, quickly consider if that is a Samoan, Maori, or Vietnamese word? Chances are no one behind the bar even thought to ask.

Daniel Guess has been a stalwart in the Tampa bar community for over a decade. Having run some of the most progressive bar programs in the city, his love for spirits and education has never faltered. Continuing his journey through brand strategy and training, he has helped many bars become more cutting edge. He...
More
Scroll to read more Food News articles
Join the Creative Loafing Tampa Bay Press Club