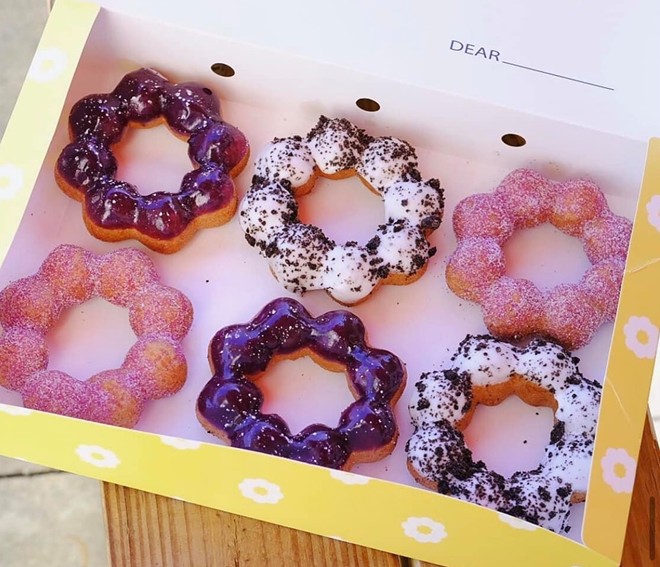 Mochinut Tampa / Facebook
This unique dessert franchise with a cult-like following has taken the country by storm, and Temple Terrace is the most recent city that has succumbed to the Mochinut trend.

Its new customers will also be able to attend its soft opening period which runs from June 13-June 16 from 12 p.m.-6 p.m. (or until sold out)—but the Mochinut team will exclusively sell its mochi doughnuts and Korean corn dogs, excluding any beverage items.

After next Saturday's grand opening,  Tampa's debut Mochinut will be open from 11 a.m.-8 p.m. seven days a week. Its doughnuts will start at $3.25 each, corn dogs will run you $4 and its different boba teas start at $5.85.

A representative from Tampa’s Mochinut tells Creative Loafing Tampa Bay that its location will rotate its flavors every three days, in addition to weekend specials. Popular flavors of their chewy and stretchy doughnuts include mango, matcha, black sesame and Nutella.

Flavors range from location to location, but Mochinut’s typical doughnut menu can be found on mochinut.com. And its doughnuts aren’t the things filled with mochi—its Korean corn dogs are also coated in rice flour, making its coating crispy yet chewy.

Fillings include mozzarella cheese and hot dogs, while coatings range from french fries to hot cheetos and crushed ramen noodles. Its various drink offerings include different types of milk teas, Thai tea and matcha lattes—but its signature beverage is its brown sugar boba.

There’s already Mochinut locations heading to Bradenton and Pinellas Park, in addition to its recently-opened storefront in Orlando. Other parts of Florida that have latched onto the Mochinut trend include Jacksonville and Sarasota.

Although the mochi doughnut trend originated in Hawaii, Mochinut itself is a California-based company that opened its first storefront in 2020, according to sandiegoville.com.

With hundreds of locations across 27 states, the niche dessert cafe is taking the U.S. by storm. For the latest news on Tampa’s highly-anticipated Mochinut, follow its Facebook at @mochinut.tampa.

And if you don’t want to wait until June 18 to try mochi doughnuts, head to Tampa Bay’s different Ding Tea locations, which sell select flavors of the trendy dessert.