King of the Coop is about to turn up the heat in Tampa Bay. 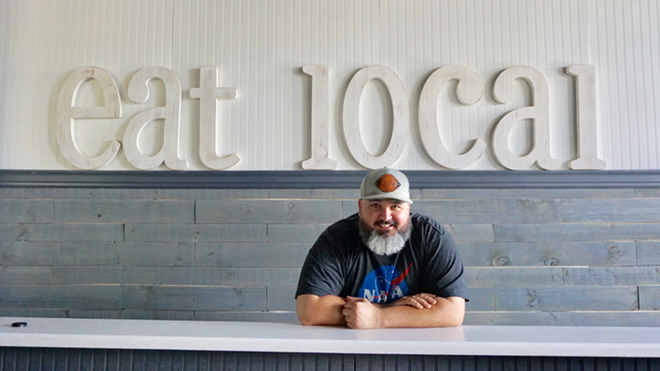 We are less than one week away from the debut of King of the Coop, a Nashville hot chicken joint coming to Seminole Heights.

You may recognize the name from the menu of former Armature Works’ resident, Soul Food Street Kitchen.

Since the chicken sandwich was one of the most popular items, it has become the namesake of owner Joe Dodd’s latest concept.

“We sold so many of those sandwiches. My partner and I would show up to food truck rallies and get pounded with orders one after another,” Dodd recalls.

A word of advice: Don’t touch your face when eating — otherwise it won’t be pretty.

During their time at Armature Works, Dodd began putting plans together for the eatery this past February.

Their next-door neighbor will be Florida Avenue Eats, another newbie on the scene.

Luckily, the Coop shares backyard space with Florida Avenue Eats and will feature a few picnic tables providing some outdoor seating for both concepts.

“I really wanted to build a community spot where people can come in and it’s nothing fancy; we’re just doing fried chicken. Just good vibes and good food like everywhere else on Florida Avenue,” he says.

Besides Nashville Hot Chicken, other offerings include fried catfish and a few popular faves from Soul Food Street Kitchen — one of which is the jalapeño-cheddar hush puppies with pimento cheese, creamed collard greens and mac n’ cheese. Items like loaded fries will also make occasional appearances on the chicken joint's bill of fare.

“We marinate it for 24 hours in buttermilk and hand-bread everything here. Customers will be able to see us frying the chicken,” Dodd says.

Wanting to foster the spirit of building and expanding the Seminole Heights community, Dodd encourages customers to bounce around from the Coop to Florida Ave.

Although King of the Coop will solely offer lunch and dinner hours at first, Sunday brunch is in the works for the near future.

The chicken joint will open seven days a week, Sunday through Thursday 11 a.m.-9 p.m. and 11 a.m. to midnight Friday and Saturday.

King of the Coop will host its soft opening to the public on Wednesday, April 17th.

Dodd hopes to work out any kinks within the first few weeks of operation prior to hosting a grand opening.

The owner teases a celebratory block party with Revolution Ice Cream Co. and Florida Avenue Eats for the event.

In any case, we’re ready for King of the Coop to turn up the heat in Tampa Bay.


Want to know everything going on with Tampa Bay's food and drink scene? Sign up for our Bites newsletter.