ICYMI: There's a new place for nightlife in Clearwater 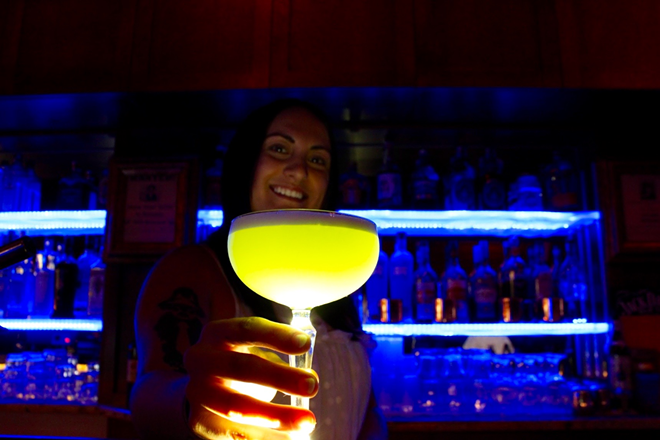 The Clearwater building at 1343 Cleveland St. that stood empty for 20 years has transformed into a posh speakeasy and supper club: Dolce.

With password entry after 10 p.m. daily, the dress code standard starts at business casual and encourages Prohibition-era attire. And those who gain entry shouldn’t expect to catch the next Rays game anytime soon; there are no televisions. Instead, a state-of-the-art sound system pipes the sultry sounds of burlesque performers singing "Happy Birthday" to patrons and the instruments of live jazz musicians throughout the premises. John DiDomizio, a longtime Clearwater entrepreneur and the owner of N.Y. Cab & Limo Co., started playing with the idea of a speakeasy three years ago. Channeling inspiration from Key West’s Better Than Sex dessert restaurant, renovations on the 3,000-square-foot Dolce space — formally an IHOP — kicked off in January 2016. The building’s iconic pitched ceilings are now laden with fleur-de-lis tin ceiling tiles, chandeliers and restored woodwork, making the setting feel sexier than 24-hour pancakes. A 1,400-bottle wine room helps, too.

Executive chefs Etienne Jehl and Damion Glushko, who landed at Dolce by way of the Orlando area, both have more than 30 years of experience. The menu, created by the two chefs in an open kitchen, runs late — 11 p.m. on weekdays and midnight on weekends — and spotlights offerings like tuna tartare, charcuterie, New York strip and close to 10 desserts. If dressing up for dinner isn’t your thing, though, UberEATS delivers.

According to general manager Lisa Wise, a 15-year acquaintance of DiDomizio, it didn’t take long for her to agree to the position.

“John’s passion is what brought his staff in,” Wise says. “It became a fever and we all caught it.”

For guests curious about the cocktails, she’s more than happy to explain the historical relevance of the Mary Pickford, Hanky Panky and French 75: “Everything is connected to the Prohibition era. Every drink is immersed in Prohibition history.”

Dolce, which held a grand opening celebration in early March, has quickly reached the full potential of its new home. Since hosting a wedding reception in-house, the speakeasy and supper club was inspired to expand the building to include a banquet room and patio, which will allow for 5,000 square feet of usable space within the next few months.

Often, the Clearwater newcomer reaches its 158-seat capacity a week in advance for burlesque shows at 7 p.m. and 9 p.m. Saturdays. But fret not — themes and specials, including rollbacks to Prohibition-era food and drink pricing on Tuesdays, are featured nightly.