Indoor shuffleboard-driven bar and restaurant heads for the Heights

Shuffle: The Heights Shuffleboard Society is set to offer four courts alongside beer, wine and food.

Architect: (allegedly) design / Rendering: Giancarlo Santillan
A look at what Shuffle has planned for Tampa Heights. Instead of an opening in the brick wall, however, counter seating with a nice view of the indoor courts is planned.

How do you feel about shooting a shuffleboard biscuit indoors? What about downing poutine or a craft beer while you're doing it? Friends and Seminole Heights residents Jennifer Montgomery and Danielle O'Connor are bringing a shuffleboard-driven bar and restaurant, Shuffle: The Heights Shuffleboard Society, to Tampa Heights, where the game won't be an added bonus — it's the focus.

Members of the St. Petersburg Shuffleboard Club who met 10 years ago when their kids were at Lowry Park's Zoo School, the duo have always wanted to open their own business. They've been working on their shuffleboard project since December 2015.

"Shuffleboard's a very Florida thing. It really started here," O'Connor said. "And we figure, you know, if shuffleboard fails, we can just open a dance club."

Before you ask: This ain't table shuffleboard, which O'Connor and Montgomery say is what first comes to mind for many people. Although the tabletop variety will be on hand, Shuffle is set to bring four indoor courts to 2612 N. Tampa St. — 4,700 square feet previously occupied by a Disabled American Veterans building — alongside a "more refined concession stand." That means grub like poutine, hot dogs with gourmet toppings, possibly corn dogs and probably a burger.

"Things that are easy to eat," Montgomery said.

On the drinks side, patrons can look forward to wine and beer. The brews selection, mostly served in cans, though two to four drafts are in store, will be as local as possible, with the exception of one to-be-determined "bullshit" beer (think PBR or Miller Lite). 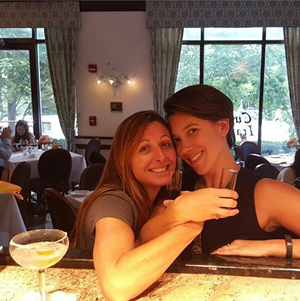 The founders have reached out to other indoor shuffleboard hangouts with food and drink around the country while developing their own. There are two, as it turns out: Brooklyn's Royal Palms Shuffleboard and Marblehead, Ohio's Erie Social Shuffleboard Club & Bar. On an invitation to Erie Social from owner James Miketo, the pair say they scoped out business plans, menus and pricing, plus observed the way customers interact and how Miketo sets up leagues, which they aim to offer on opposite nights of St. Pete Shuffle, so as to not compete with the nonprofit.

"He's been great," O'Connor said of Miketo. "He's given us so much advice and help, and anytime we have a question or issue he'll hop on the phone with us."

Both Erie Social and Royal Palms have sibling locations, the former in Cleveland (under the name Forest City Shuffleboard) and the latter in Chicago, that they'll travel to later this year. And the duo aren't lacking in local support. Tight with restaurant and bar owners around Tampa, the minds behind places like the Independent Bar and Cafe, Ella's Americana Folk Art Cafe, The Refinery, The Bricks and Rooster & the Till have all provided recommendations and moral support.

Even their kids, who range in age from 8 to 13 (Montgomery has two girls and a boy; O'Connor has two girls) and recently caught Froggy Fresh at Ybor City's Crowbar, are hyped about the project.

"This has been so crucial to them," Montgomery said. "They're so invested in the idea and the concept and watching us go through it."

Anyone can stop by the shuffleboard club — Tampa's first as far as the duo know — for booze, grub or a game, which will likely cost between $6 and $8. However, some details are still in the works, including membership benefits and whether or not they'll implement a time limit, charge per hour or per game, and take reservations.

O'Connor and Montgomery are also encouraging customers to use alternative transportation to get to and from the Heights — bus or bike, walk or run. You get the idea.

"We want to be a part of the community. Instead of being super gentrification-focused, being more, like, 'Alright, what does the community actually want?'" Montgomery said.

"'What can we offer them?'" continued O'Connor. "We're obviously offering a place for people to come spend their money and have fun and eat and drink, but that's not what everyone can do in that community. So we want to offer other things to those people who can't afford to come here."

If all goes well at Thursday's 6 p.m. City Council meeting about change-of-use zoning and wet zoning, the pair can move forward with the project, which is targeting a November opening with (allegedly) design on board as the architect. They're trying to get as many in-favor folks to the third-floor City Hall hearing as possible.

"The more people that show up, the more likely it is to be approved," O'Connor said.

More than anything, Shuffle, whose goal is to expand into its large outdoor area in the future, is meant to be a place people can feel good about frequenting, as well as a place where they can partake in some healthy competition with friends and strangers. (Those who've picked up a game of doubles know what I'm talking about.)

"We are so excited," O'Connor said.

"Can you just tell everyone we love them?" asked Montgomery.

"Yeah, we do," O'Connor said. "We just want it to be a place that offers a community. It's not gonna be cold and sterile. We want everyone to feel welcome."

"No matter what," Montgomery said.