It's back to the restaurant business for Michelle and Robert Faedo

The wife-and-husband duo are bringing their Tampanian eats to a new brick-and-mortar location. 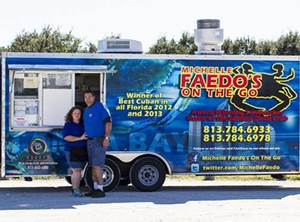 Michelle Faedo's On The Go via Facebook
The Faedos in front of their popular food truck.

According to Michelle, they'll continue to run their uber-popular food truck, Michelle Faedo's on the Go, alongside Tampeño Cuisine, so fans of the moveable feast — and its deviled crab, Hyde Park turkey sandwich and Cuban — shouldn't worry. On the Go, which usually sells 150 to 200 sandwiches a day and posts its mobile schedule to Facebook weekly, has been in operation since the couple's longtime Ybor City restaurant closed its doors in 2011.

In downtown Tampa, guests can expect everything the food truck does sandwich- and lunch-wise, but with the addition of breakfast and a hot lunch plate option. Daily specials (think seafood on Fridays and Italian Day) are also planned.

"Everyday is gonna be something different," Michelle says.