Many people, as is the case with this CL intern, look to food bloggers for daily inspiration on what to cook and where to eat. A recipe or review catches your eye and immediate hunger begins. The world of food blogging isn't just about pretty photos or dining-out recommendations, though. Yes, there are bloggers who do just that. But some are expanding beyond food to a variety of issues. Take Dan Hanley of The Gay Vegans. In addition to writing about veganism and his adventures with husband Mike as a gay, vegan married couple living in the Los Angeles suburbs, Hanley tackles topics like human and animal rights, activism and building bridges between communities.

He says he thinks food choices are a barrier when it comes to omnivores going vegan, which is why he'll cover food in his blog from time to time. To help those considering a vegan lifestyle, he breaks down the myths surrounding what vegan cuisine is — and what vegans eat.

"Being vegan for me completely changed how I look at food," Hanley said, "and I think the variety of food choices that are part of a vegan life are endless." 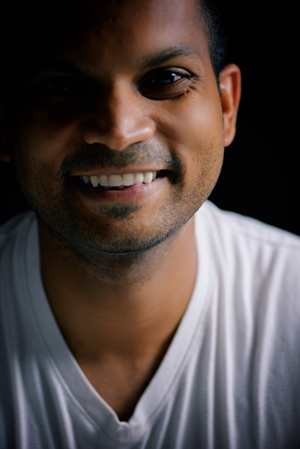 It's not often that you find newspaper columnists moonlighting as food bloggers. Oakland, California-based Nik Sharma works double time on his blog, A Brown Table, and Sunday column of the same name for the San Francisco Chronicle. Both are recipe-driven.

"My recipes are inspired by my experience as an immigrant and draw from my background growing up in India and America," Sharma said.

He tells CL he got into food writing because it gave him the opportunity to connect with people as a gay immigrant. Writing has helped him evolve his cooking, too. According to Sharma, he noticed over time that his style adapted and acclimated to his new surroundings in the U.S. Neat how moving to another country can change someone's approach in the kitchen, right?

Never Have I Ever

Locally, the guys behind Never Have I Ever, Nicholas Catania and Ryan Sullivan, focus on trying new things for their lifestyle blog; they enjoy one-of-a-kind experiences around Tampa and anywhere else they travel, after all. Married in March, the duo says finding LGBTQ-friendly places is important to them because they want to patronize spots that are welcoming to everyone.

Being a young gay couple gives them a unique perspective as well. They've gone from featuring reviews, events and Bay area adventures on NHIE to sharing their day-to-day and overall life experiences, including their wedding and numerous music festivals. But, you know, since they love food, their audience knows to expect stories about their frequent food-scapades.

"We hope that by sharing our stories and adventures, we can encourage our followers to get out and try new experiences while inspiring them to be proud of the things that make them unique," Sullivan and Catania said.