It’s the brainchild of Julie Michelle Sainte Feliciano who’s been operating as ‘Good Fortune Baby’ for the last 20 months. 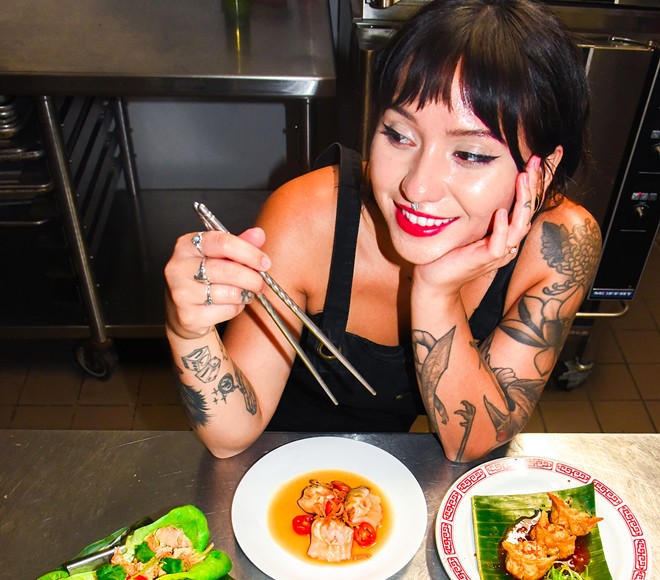 The 24-year-old has waited tables, roasted coffee, worked in kitchens, poured lattes and has spent the last two years hosting Good Fortune Baby pop-ups throughout Tampa Bay. Soon, she’ll dive head first into the world of being a business owner and restaurateur under a new company name, Lucky Tigré.

With help of family, friends, and mentors, the young, self-taught chef will debut Tampa Bay’s first sari-sari counter later this year inside of a small space in South Tampa stacked with snacks, sundries plus Feliciano’s iconic dumplings and small plates.

In Tagalog, the national language of the Philippines, “sari-sari” it translates into “variety.”

“There are sari-sari’s on every street corner in the Philippines. They’re basically these walk-up bodegas where you can buy snacks, drinks and sundries—but everything is sold in a small, to-go portion,” Feliciano, currently the Creative Director of Ciccio Restaurant Group’s local brands, tells Creative Loafing Tampa Bay.

While she and her mother Gina Bastasa Flores—who is often seen working Good Fortune Baby pop-ups alongside her daughter—take care of its menu, the Lucky Tigre sari-sari will also offer a wide variety of Asian snacks uncommon in local bodegas. Feliciano hopes to work directly with local distributors and oriental markets to source her goods, as supporting fellow Asian-owned businesses in Tampa Bay is an absolute priority for her.

She and her boyfriend started selling small plates inspired by traditional Filipino flavors—including their hand-folded dumplings—during 2020’s pandemic. Friends and neighbors were the recipients at first, but Good Fortune Baby quickly outgrew the cottage kitchen-style service. Feliciano hosted her first physical pop-up at Cafe Hey in the fall of 2020, a fellow Asian-owned business in Tampa Heights.

Since then, both her menu and fan base has rapidly expanded; it’s not uncommon for the dumplings and small plates to sell out before the pop-up is scheduled to end. Some of her tediously-crafted offerings include vegan lumpia with garlic chili dipping sauce, white pepper pork dumplings, oyster mushroom siopao buns and thick dumplings filled with the Filipino noodle dish pancit.

“My food will never taste the same as what your lola makes, but I’m going to offer dishes that you can’t really make at home. It’s the same—but diprent."

“My food will never taste the same as what your lola makes, but I’m going to offer dishes that you can’t really make at home. It’s the same—but diprent,” she jokingly says in a Filipino accent.

Although Good Fortune Baby has curated its customer base for upwards of three years, Feliciano’s upcoming sari-sari is opening under a different moniker. Lucky Tigré speaks to her superstitious, but optimistic nature.

A St. Pete Rising Instagram post about St. Pete’s Good Fortune concept is flooded with nearly 400 comments, many of which criticize Hunger and Thirst’s plan.

Although Good Fortune Baby’s fans and other community members were shocked, Feliciano herself was not. She had been aware of Good Fortune for months, and told CL she met with Hunger Thirst CEO Stephen Schrutt back in April.

“I can't really speak for the group’s intentions with their name or menu direction, but I did have close and personal relationships with a few key members on the team for this concept,” Feliciano says. “I do know [Schrutt] was made aware of us early on, after speaking with multiple people on his team—and I also made it a point to meet with him to make sure he knew, directly from me.”

Feliciano left her conversation with Schrutt realizing that she had no choice but to rebrand, as Good Fortune was going to continue under the same name and concept. Last month, she made a separate social media account for Lucky Tigré, to begin the pivot away from Good Fortune Baby.

And with Chinese characters, Japanese-forward cocktails, manga plastered on its walls, and a sushi menu with Southeast Asian characteristics—St. Pete’s Good Fortune leans on its “fusion” aspect heavily.

When asked by CL to comment on the similarities between his newest restaurant and Feliciano’s business, Schrutt says, “My vision for Good Fortune St. Pete dates back over a decade and I decided on the name a few years ago. I was happy to meet with Julie upon her request a few weeks ago, and this was the first time I learned about her business.”

He feels that their meeting was a positive experience where they discussed their different concepts. “I thought we agreed we could coexist. I see room for both of our businesses and wish her the best,” Schrutt adds.

There was also public pushback against the photos that Hunger Thirst Group used in its mood board for Good Fortune, which was attached to its press release for the new concept. It was a collage of several photos of Asian dishes, craft cocktails and people slurping noodles.

More than half of the photos used were directly taken from the social media pages of 1-800-Lucky, an Asian food hall in Miami (that coincidentally uses a similar logo to Good Fortune.)

Food influencer Rachel Sampson—who runs the Instagram account @stickaforkinme— tells CL that she did not consent to her photo being used in Hunger and Thirst’s press release for Good Fortune. The mood board was originally used in ILovetheBurg’s article about the restaurant, but the photo has since then been changed. CL was unable to contact 1-800 Lucky for comment.

DJ Casper, a popular Tampa Bay DJ that previously worked at St. Pete’s Park and Rec, calls Schrutt “the culture vulture of St. Pete.” Besides disagreements on music choices and other creative decisions, Casper says that someone really needs to address Schrutt’s treatment of other creatives in the Bay area.

“It's not shocking that he’s taking a concept from someone, but it is surprising that he’s copying someone else in Tampa Bay,” DJ Casper states. “Schrutt might have good intentions, but his decisions do affect his employees and other people in the community.”

Casper points out that there are also similarities between Schrutt’s other businesses and already-existing concepts completely aside from Hunger and Thirst’s soon-to-open Good Fortune. The group also operates Tampa and St. Pete locations of Park & Rec, No Vacancy, Dirty Laundry and The Avenue. There are Dirty Laundry bars in both Los Angeles and Orlando, alongside a Park and Rec in San Diego, which all bear resemblances to Hunger and Thirst’s establishments.

But Schrutt insists that he strives to make his concepts unique.

“In this industry, I’ve seen a lot of names that are reused in other markets for various purposes. Business owners in other cities have contacted me about using similar names to mine, which I have supported,” he tells CL.

And with her transition from Good Fortune Baby to Lucky Tigré in full swing, Feliciano’s last day at Ciccio Restaurant Group is rapidly approaching. She will soon dive into being a full-time business owner in preparation for her sari-sari’s debut at an address she’s not quite ready to make public.

Although her and her mother’s small plate menu isn’t fully hashed out yet, Good Fortune Baby’s loyal customer base can expect their same bold flavors and unique dishes when the Lucky Tigré brick and mortar opens in South Tampa this fall. 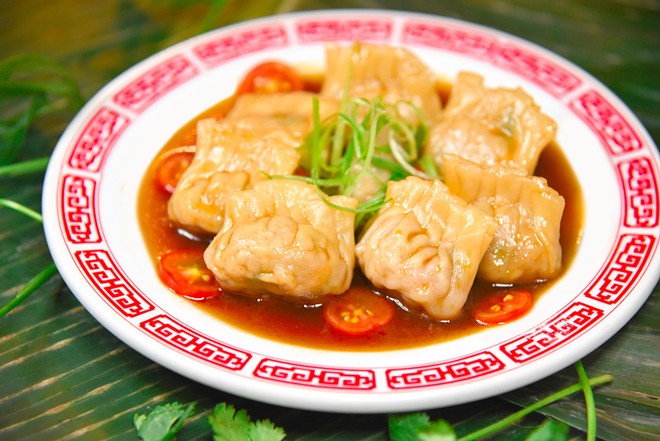 Photo c/o Lucky Tigré
Sinigang pork dumplings are some of the offerings at Lucky Tigré.
Feliciano has big plans for her small space—including a menu of experimental soup dumplings (OG Good Fortune Baby customers remember her tinola-filled dumplings), growing fresh Filipino produce in its garden area, and even teaming up with local roasters to ethically source coffee directly from the mountains of the Philippines.

Feliciano will focus on her hybrid small plates, while her mom will stick to more expected Filipino offerings. “My mom has never had a culinary background—she just had a lot of siblings to take care of. Her dishes are more traditional and she’ll make everything from kare kare to sinigang, ” she says.

Adjacent to Lucky Tigré’s to-go order window, will be roughly 25 outdoor seats. The sari-sari will tentatively be open Wednesday-Sunday, with hours similar to other Filipino joints in Tampa; Filipiniana Cafe, Manila Eats and Mata’s Philippine Cuisine are also closed on Mondays and Tuesdays.

Feliciano’s last pop-up under the Good Fortune Baby name takes place in St. Petersburg on June 25, but pop-ups will slow down as she takes the plunge into Lucky Tigré. Follow her new Instagram page at @luckytigretpa to preview menu items ahead of the sari-sari’s grand opening. The latest sneak peak features her okonomiyaki wontons, which are savory, bite-sized renditions of the traditional Japanese pancake.

And as for her thoughts on Good Fortune, slated to open in The Burg’ this summer, Feliciano wishes them the best. “We’re grateful for everyone’s support and for everyone sticking up for us. I’m excited for a new chapter with Lucky Tigré.”

After all, Feliciano has the phrase “Good Fortune” tattooed over her knee—but a massive, intimidating tiger sprawled over the entirety of her back.