Manna from the Motherland 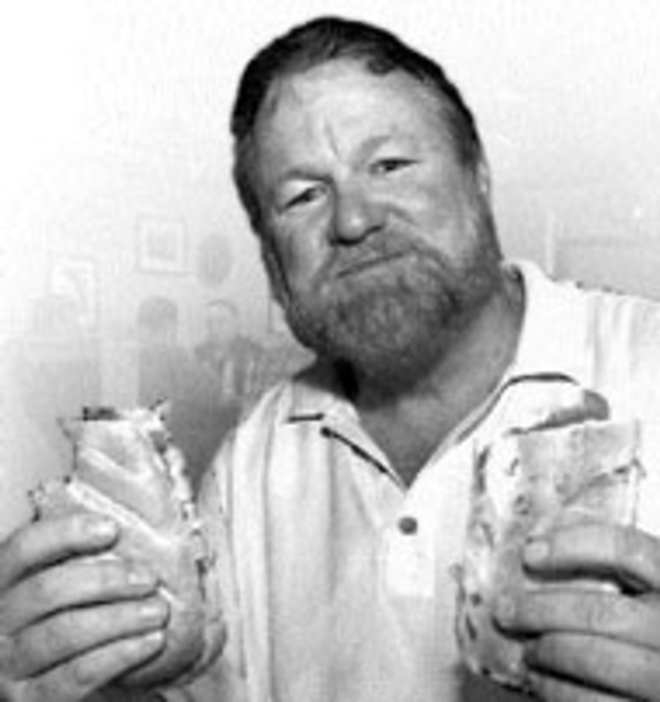 Take a family business, add a dash of simple friendliness, stir in a selection of traditional English dishes — bangers and mash (sausage and potatoes), fruit crumble and, of course, truly excellent, fresh-brewed tea, plus a good selection of American favorites like big, buxom burgers and salads — top with fast service, and you've got the recipe for a successful restaurant.Owned by former Londoners Mike and Peter Vanderburg and their spouses, Susie and Lisa, respectively, Cafe European has been catering to the city's Anglophiles for eight years. The men wait on customers and handle the money. The women cook. The foursome never, ever attempts to swap jobs: "We want to keep what customers we have," Lisa says with a laugh.

The eatery draws a healthy following from its immediate neighbors at The Tampa Tribune and the staff and students at the University of Tampa, plus an enthusiastic lunch crowd from Tampa's downtown business district across the Hillsborough River.

Set in a humble building with a low ceiling amid a block of small shops, the cafe is far from glamorous, but its hominess and even homeliness seem to win over its many visitors. In addition to European owners and English specialties, it even has an authentically British, boxed-off front entryway — very effective at keeping out thick, cold air like that in London, or dank, hot air, as in Tampa.

At noon, the place is packed, every closely set table occupied. Typically, a line of waiting diners straggles out the door and into the street. At night, Cafe European is less busy, but still does a respectable trade — a difficult task, considering that the neighborhood around it is pretty much deserted after 5 p.m.

As a longtime lunch regular, I almost always choose the same dish: salmon salad ($6.95 lunch, $9.95 dinner). I order it not because it is low-calorie, but because it's terrific (Weekly Planet Best of the Bay 2002 Best Salad). The salmon is poached and chilled overnight in a homemade marinade, then piled atop an assortment of fresh romaine and iceberg lettuce, lavished with grated carrots and shredded purple cabbage, tomatoes and chopped cucumbers. Yummy handmade vinaigrette dressing gives it a special cachet.

I'm partial to the quiche because it's one of the best in the city, better even than much more expensive versions I've tasted at various French restaurants. Its filling is light and smooth, crammed with veggies and cheese, or laden with bacon or ham. The quiche sits upon a buttery crust that retains its oven crispness, so when you bite, it buckles and crumbles charmingly as it folds into the silken filling.

Also popular are the restaurant's "lite bites," appetizers for those who might not want to order a huge main dish. These include jumbo shrimp in garlic and lemon butter ($7.95 lunch, $8.75 dinner) and potato skins ($4.95, lunch and dinner), fried and served with garlic mayonnaise.

At dinner, the fare maintains the restaurant's typically excellent standards, but once the sun sets, its prices become much steeper. Maybe too steep. For example, a small plate of a simple pasta, like spaghetti topped with ground beef and onions in a tomato sauce — which decent cooks can easily make at home — costs $10.95. Other entrees range from $13.95-$17.95.

Still, Cafe European's consistently high-quality ingredients, matched with careful attention to detail in the kitchen, do make for a pleasant dinner outing.

We started with an appetizer, jalapeño steak bites ($7.95), innocuous enough to look at but carrying a lethal, slow-burning sauce. At first, I snarfed with abandon the bite-size sirloin chunks, but slowed after a surprising scorching sensation set in. Mercifully, a cold bottle of Guinness ($4.25) sat at the ready.

The restaurant's wine list is small but offers a nice mix of domestic and imported wines and beers. On a new wine menu that comes out this month, there are 10 vintages available by the glass and 15 bottled varieties. With no liquor license, Café European does not offer mixed drinks.

My dining companion ordered an entree of angel hair pasta Alfredo ($11.95, including bread and choice of salad), the soft strands dotted with mushrooms and garlic, its creamy wine sauce luminous.

I chose something more complex: the famous Beef Wellington ($14.95), named in honor of the Duke of Wellington, a British general who defeated Napoleon at Waterloo in 1815. The dish's name does not refer to Wellington's culinary preference but to the way the food sometimes looks when it's finished — the color of shiny, brown military boots.

Cafe European's version entailed a healthy steak filet swathed with duxelle, a mushroom seasoning sauce, wrapped in a full-body envelope of puff pastry and baked. As an option, some cooks add a layer of luxe paté beneath the pastry to give the dish more texture and flavor. This one was accompanied by a fine Béarnaise sauce, and a delightful side dish of sautéed mushrooms and fresh spinach. It was a respectable effort, but didn't knock me out. Still, I ate plenty before I put my fork down and started to slouch toward dessert.

Cafe European lists only five sweets on the menu, but they're all superior. My favorite is petit pot au chocolat ($3.50 lunch, $4.25 dinner), chocolate spun into an airy lightness and served chilled in its own little vessel. So cold, so rich. What the Brits call crumble, Americans know as fruit cobbler. Café European's crumble features stewed fruit, baked with a buttery, crunchy topping, and crowned with vanilla ice cream. My only complaint: It was served too hot to eat.

Assuming you survive the jalapeño steak bites and still have a functioning tongue after the hot crumble, finish with a cup of tea, and you're practically a Brit. Cheerio!