Meals on wheels: Da Kine might serve the best food you've ever eaten in your car 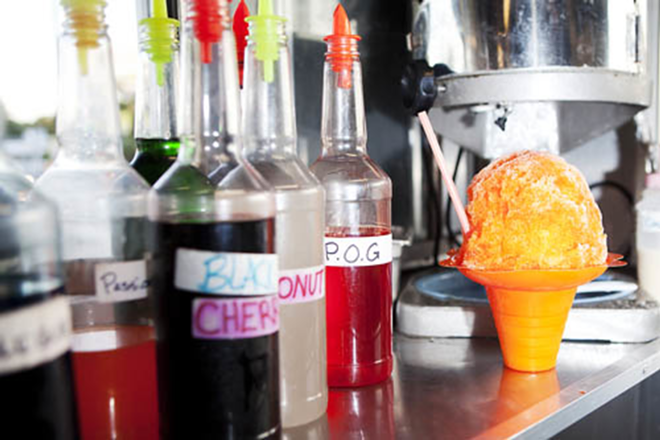 Steve Clay moved to Tampa from Portland a few years back, leaving the hipster capital of the world for Tampa's more middle-America vibe. Fine with him, except for one thing: the food just didn't ring his bells. Portland has one of the most thriving and diverse food truck scenes in the country, while Tampa has, well, a taco bus.

At first he hoped to lure a food truck friend to town to sell the Hawaiian-inspired cuisine that was his favorite style of portable food. When that fell through, Clay decided to do it himself, armed with a few recipes, a bright orange truck and a parking lot on Dale Mabry.

The result is just what Tampa needed — and still needs more of: artisan fast food with a hook, packing more flavor, interest and value than what you can get from Tampa's bloated restaurant chain marketplace.

Besides the speed with which Clay churns out plates of meat and rice from his truck on Dale Mabry, his dishes have more in common with fast food than you might think. His sauces are sweet and salty across the board — two tricks that the chains use to keep people coming back. At Da Kine, however, that salt and sugar is a natural homage to Hawaii instead of a carefully and cruelly calculated formula.

Nothing cruel — or even fast — about Da Kine's signature shoyu chicken. The meat is slow cooked until it falls into soft shreds, each hunk of chicken stained a rich brown by the sweet soy-based sauce that is Clay's trademark. It's served — like almost everything at Da Kine — with a simple scoop of steamed white rice and a side of peppery macaroni salad.

By itself, that chicken is almost too much of a good thing, but pair a forkful of meat with the rice and it's tempered, balanced and damn tasty.

Other meats are cooked to order, like Da Kine's thinly sliced beef stir-fried with more sweet and salty sauce, still sizzling when it's handed across the counter in a vented styrofoam container. Take it home if you'd like — it'll still be good — but you may want to stop and enjoy a few bites in Da Kine's impromptu picnic area under the umbrellas.

Equally good are thinly sliced short ribs complete with a little nub of bone at one end, fried until the meat is shiny with sticky reduced sauce and the edges are dark and crisp. There are also massive burgers gifted with the same crunchy crust and graced with an over-easy egg that, when broken open, ties the ground beef and rice into a seamless and satisfying whole.

The only thing that Da Kine doesn't get right is its veggie plate, the hunks of squash and broccoli less sweet, less salty and without the exciting texture given to the meat on the griddle. But on a menu filled with delicious meat, that's a forgiveable lapse in culinary skills.

At first glance, the prices might make you think that Da Kine's version of fast food is going to cost you a lot more than the drive-through down the street. Take a closer look, however, and you'll see that the dishes come in three sizes: half, regular, and double. The regular size, which usually runs close to $10, is meant for seriously hungry folks. Order the double and you'll likely have enough for two, with plenty left over for a decent lunch the next day.

Da Kine is almost as quick as fast food, almost as cheap as fast food, and convenient as hell if you're anywhere near South Dale Mabry. Just take a bite of the salty-sweet, crispy beef or the tender marinated chicken and it likely will be one of the best things you've ever eaten on the side of the road or in the front seat of your car.