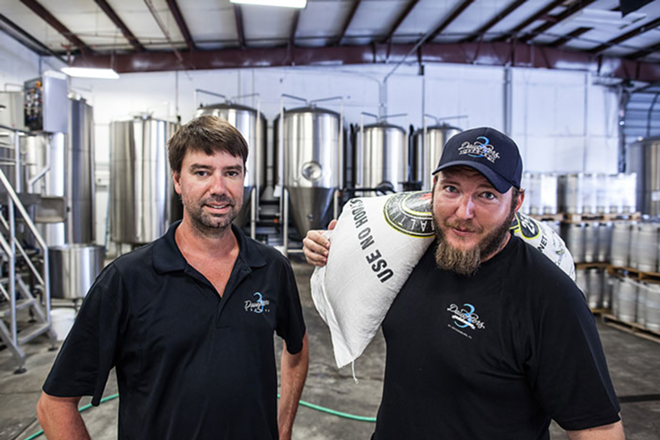 
If craft beer was ever the province of some hip, haughty more-in-the-know-than-you clique — and it was — then it’s not anymore. Craft breweries want to be successful, and that means reaching an audience beyond insiders and diehards. There’s a new populism to craft beer, and it’s embodied not only in big, fun, family-friendly spaces like St. Pete’s 3 Daughters, but also in the people making it, like 3 Daughters’ Ty Weaver and Steve Buyens, who got their start sharing brews with the patrons at the restaurant where they worked.

Both men worked under 3 Daughters owner Mike Harting at well-known downtown eatery BellaBrava, where Weaver asked Buyens if he would like to take part in the former’s homebrewing hobby. From there, a partnership blossomed that eventually saw the pair offering their beers to BellaBrava customers.

“It was Mike’s idea, actually,” says Weaver, a former chef. “He asked if we could do it. I told him what it would require, and I thought it would be too expensive to get the resources, but he went for it. It was fun.”

That relationship carried over when Harting started 3 Daughters, hiring Weaver as his head brewer and bringing Buyens along, too. The duo traded the culinary world for the craft-brewing space as a full-time — and then some — occupation. When asked what they do when they’re not at the brewery, the guys exchange glances and laughs.

“We don’t get out much,” says Buyens.

“I guess my favorite hangout is the Gulf of Mexico,” Buyens adds. “If I’m not here, I’d rather be fishing.”

Turning brewing from a home-based hobby into a commercial enterprise has its tradeoffs, and one of them is the amount of drinking that gets done. Other than tasting, Weaver and Buyens don’t imbibe at all when they’re on the job. Sitting down to hash out new ideas for the next batch of beer, however, is a different story.

“That’s the drinking part,” Buyens says. “We’ll probably finish today, sit down at a table, have a beer and say, ‘What do you want to do next week? What have you tasted recently? What do you want to make that you haven’t yet?’ If it works out well, it’s great. If not, we’ll try something else.”

The desire to turn casual beer drinkers into craft beer aficionados doesn’t hold the team back from trying new things. 3 Daughters already has a healthy reputation for having new and exciting beers on tap (in addition to the brewery’s core beers), incorporating intriguing flavors like watermelon and cherry or new takes on traditional European styles. For Weaver and Buyens, such experiments shouldn’t scare people off, and if the beer is well-made and tasty, any style has the potential to convert a new drinker.

“We want everybody to like our beers, you know,” says Buyens. “We’re not beer snobs, we want everybody to come enjoy a craft beer. We try to make it accessible enough that everybody can find at least something to like. We’ve had Bud Light drinkers come in and like the dunkel after saying they don’t like any dark beers. It’s cool when people find something they like when they didn’t think they would.”

Favorite local beer that isn’t theirs: Buyens: “I guess the easiest to come by — like I said, we’re here or at home, and most local beers are only on tap. So Cigar City makes great beer, they’re a bigger brewery and they still put out a high-quality product.” Weaver: “If I’m out and about, I’ll always order a [Cigar City] Jai Alai. Rapp also makes really, really good beer.”

Their signature 3 Daughters beer: Buyens: “Our number-one seller, our flagship is the Beach Blonde Ale, that’s what we’re about, hanging out, being outdoors. But my favorite is either gonna be the Brown Pelican dunkel, or Channel Marker red that we just came out with.” Weaver: “The Belgian quad that we make is probably my favorite beer, it’s a version of what we homebrewed. I like that one a lot. But the red, it’s a good beer, refreshing, good on a hot day but still enough flavor to let you know it’s a good beer.”