Kitchen secrets, the next big grub trend and more are dished from some of Tampa's top chefs. 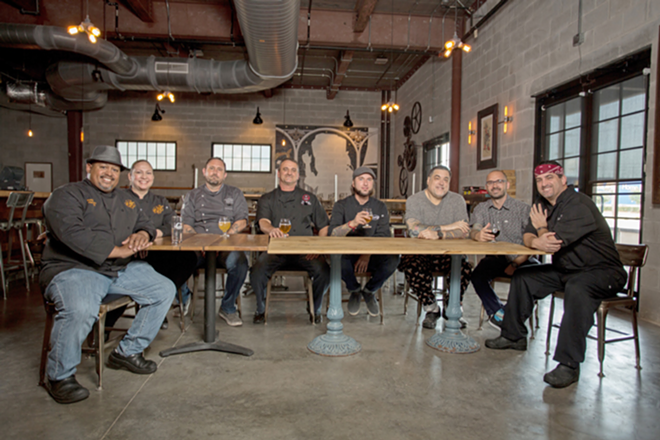 James Ostrand
CHEF'S TABLE: The experts take a break from beer-tasting at Coppertail.


By the time you read this, it’ll all be a sweet memory — the smoked pork congee and the salmon belly crudo, the curried deviled ham and the Maple Leaf Farms duck duo, the green curried short rib and the red wine oxtail arancini and the chocolate pot de creme infused with Coppertail Brewing Co.’s custom porter. James Ostrand
MARTY BLITZ
Executive Chef & Co-owner, Mise en Place (Opened 1986) / Sono (2010) / First Flight (2012)
That is, it’s a memory if you made it to CL’s Meet the Chefs event on June 10. That’s when eight of the area’s top chefs, all of them participants in this year’s CL Restaurant Week, doled out the aforementioned dishes for a lucky crowd at Coppertail’s rustic-chic brewery in Ybor.

If you missed it, you can, of course, visit these chefs’ respective restaurants throughout the year. And if you didn’t get to actually Meet the Chefs in person, I present the next best thing: excerpts from my roundtable discussion with them last month at Coppertail, where they gathered to choose beer pairings prior to the tasting event and hung around to satisfy my curiosity about their high-pressure, highly creative culinary endeavors.

As I told them at the start, I’m not a restaurant critic — I leave that to the estimable Jon Palmer Claridge — but I am an enthusiastic eater, and after having enjoyed each of their restaurants, I wanted to know how they got to where they are. James Ostrand
ROSANA RIVERA & RICARDO CASTRO
Executive Chefs & Co-owners, Piquant (2013)
The gathering was a reunion of sorts. When I asked the question, “How many people at this table either worked for, are inspired by or feel competitive with Marty Blitz?” everyone raised their hands.

Ferrell Alvarez, Tony Bruno and Greg Baker had all worked for Blitz at one point at Mise en Place, and everyone recognized that without his pioneering efforts back in 1986, there would be no booming restaurant scene in Tampa Bay.

We began the conversation with Marty’s recollections of what it was like at the beginning, before his business expanded from catering to becoming an influential bastion of New American cuisine.


DW: Tell us about those early days, Marty.

James Ostrand
GREG BAKER
Executive Chef & Co-owner, The Refinery (2010) and Fodder & Shine (2014)
Marty Blitz: Getting a loan was impossible — we got turned down by three banks. It was crazy. We maxed our credit cards out, we took high-interest loans on equipment — we were trying to put together a catering storefront on Platt Street [subsequent home to The Rack and now The Hyde Out]. Finally, this one guy at First Union believed in us and made a $15,000 loan. We were there for five years.

DW: Those of you who have opened restaurants recently — do you think it’s harder or easier now than it was in 1986?

Greg Baker: I opened The Refinery five years ago with $80,000 in hand and that went just like that. The first week and a half we were open, we couldn’t even afford a sign. Now to get Fodder & Shine opened... more than a million, less than 2 million to get it open.

DW: Does a rising tide lift all boats?

James Ostrand
ANDY KING
Executive Culinary Director & Chef, Datz (2009) / Dough (2013) / Roux (2014)
Baker: Activity breeds activity. You may take a temporary hit while everybody goes and checks out the new place, but you get new people in the market.

Andy King: And hopefully in an opening you find a solid fan base that’s going to come back after they try the other restaurants.

DW: What are the benefits and the risks of branching out?

Blitz: I like the challenge of it, but I also like the balance, of having a good lifestyle. I’m a pretty hands-on guy, so if I do more projects I can’t be as hands-on as I would like to be.

DW: Greg, at Fodder & Shine did you feel you could do things there you couldn’t do at The Refinery?

Baker: The whole Florida cracker thing [at F&S] was just, well... [laughs] We’ve been restructuring ourselves a little bit, changing our menus around. But it was just another idea, another concept we would work with.