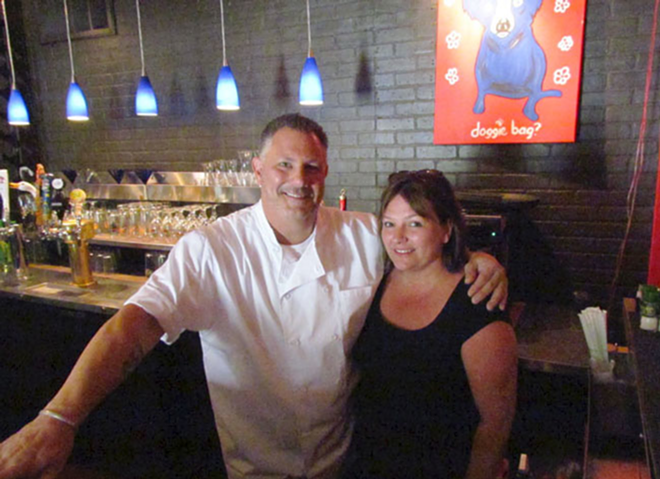 A new Chicago-style Italian restaurant has popped up in the Kenwood area of St. Petersburg.

Owners Madonna and Robert Wallace are Chicago natives who settled into Tampa Bay five weeks ago, having searched from the Florida Keys to their home state to find a fresh place to launch a restaurant. After spending a week in St. Pete, the couple was hooked, and 2924 Fifth Ave. N. became the site of Beau & Mo’s Italian Eating House, open for less than a month.

Robert — Rob, Rab, or “little Beau,” as deemed by his older sister — learned how to cook from his Sicilian grandmother while growing up. As in any typical Italian home, good food and family time were a must, so Robert had dinner five days a week at his grandmother’s house. Eventually, he took his kitchen skills outside the home, starting out in the industry in 1989 with just a bar and a popcorn machine.

Meeting another home-grown Chicagoan — his wife Madonna, the Mo of Beau & Mo’s — Robert partnered with her to open Miss Ellie’s Deli, named after their daughter Ellen. Before leaving the Windy City, the couple had owned and operated a few Miss Ellie’s Delis, two Italian eateries and a downtown steakhouse.

The Kenwood restaurant itself, which follows a black and red color scheme, is divided into three sections: bar, dining room and a more casual seating area. Not only does Madonna run the front-of-house and marketing operations, she decorates and paints as well. Scattered around the restaurant are some of her own paintings, as well as photographs of celebrities like Lady Gaga, Paul Newman and Rocky Marciano chowing down on spaghetti.

In the dining room, the Wallaces invite patrons to sit at a table from their house in Chicago while eating dishes like panko-crusted walleye, veal piccata or double-cut lamb chops, marinated for at least 24 hours. At lunchtime, there's a hamburger, too, which landed in a list of Chicago's top ten burgers in 2003.

Diners, encouraged by the restaurant’s open-door policy to stop inside the kitchen to say hello, are likely to be greeted by Beau and Mo themselves. Madonna has even brought customers' kids to the kitchen to help make cannolis.

“He comes out and checks on everybody. I check on everybody,” Madonna says. “[Patrons] love that [the] chef comes out because he really cares about his food, and then they know that.”

Madonna says the Kenwood community has been "amazingly supportive and kind" — hence the Love Our Locals (LOL) promotion on Wednesdays, when all pastas are BOGO. Over the next few weeks, the restaurant plans to add outdoor seating, a hand-painted mural by Madonna and, possibly, a sweet surprise.