The only place where an evil eye is good. 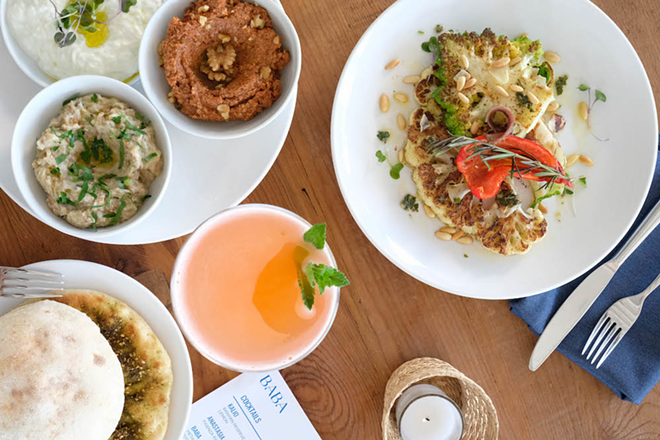 There’s a covered patio and huge double bay doors that reflect the adaptive reuse of this former garage. But when the weather is mild, they’ll blur the boundaries of inside and out. And there’s a welcoming courtyard full of planters and blue and white umbrellas, with strings of lights and giant hanging pendants reminiscent of huge floating beehives. It immediately beckons and evokes memories of hanging out with friends for a leisurely meal.

Of course, Central Avenue is not Mykonos, but as you cross into the interior, the decor celebrates the Greek evil eye motif. Dozens of concentric blue and white circles wrap the bar and the poles that hold up the roof; these evil eyes known as “mati” (μάτι) in Greek culture protect you from bad juju.

We begin with a mezze “pick three” (of seven) featuring fresh pita that’s still warm and puffed. It’s partnered with a flatbread spread with za’atar, a spicy herbal coating mainly composed of dried sumac, salt and toasted sesame. Our trio of choice is tzatziki (refreshing cucumber and yogurt sauce usually found on your neighborhood gyro), baba ganoush (eggplant-tahini mash), and muhammara (Lebanese red pepper dip). Each is fresh and balanced with enough acidity to make you salivate and want some more.

It’s all so good, but the biggest surprise is the lightly charred white cauliflower and green romanesco florets small plate. The menu hawks salsa verde, but the dressing is mainly a delightful coating of fragrant olive oil. The pine nuts listed are absent, but there’s an anchovy filet draped over a floret and a charred chunk of red pepper. It’s unexpected and simply delicious.

The menu makes no attempt to be comprehensive and doesn’t feature classic dishes such as moussaka or spanakopita. Instead the large plates stick mainly to proteins. Greek cuisine is noted for lamb, and Baba’s luscious confit with tender white beans and horta (traditionally dandelion greens brightened with lemon) is very satisfying. It’s not quite clear exactly which greens are used, but the whole bowl is terrific.

Melissa Santell
The half chicken is simply grilled and placed on a bed of large Israeli couscous flavored with preserved lemon, roasted tomato halves, and pine nuts.

The Greek fish stew is identical to what you’d find in the Aegean islands, but with fresh local seafood. There’s a small boneless fillet of a white Gulf fish, tender pink shrimp, cross cut pieces of octopus tentacles, a half dozen clams bursting from their shells, plus some veggies in a flavorful tomato-based seafood broth. It’s similar to a French bouillabaisse or Italian cioppino with a Greek twist, but they all share Mediterranean roots.

The half chicken is simply grilled and placed on a bed of large Israeli couscous flavored with preserved lemon, roasted tomato halves, and pine nuts. Most Greek cuisine isn’t complicated; the flavors are fresh and clean. One tablemate wants some sauce with this dish, but it’s in line with my experience in Greece. The ingredients reflect the smokiness that the grill imparts; it’s just not as complex as some of the other choices.

I encourage you to go outside your comfort zone and try the Greek wines available by the glass. They all come from Stamnaki on the Peloponnesian peninsula west of Athens, but Agiorgitiko (a light, fruity red) and Assyrtiko (a white with citrus and minerality) match well with the cuisine. The Moschofilero (white) is aromatic, but exceptionally light; you may pass on that one unless you prefer your wine to be oh-so-delicate.

MELISSA SANTELL
The baklava's parchment-like paper thin phyllo is brown and crisp, the nutty spice filling sweetened with honey is gooey and luscious without throwing the whole thing out of whack.

It’s no surprise that the restaurant, which shares space with its bakery, turns out desserts that are simply divine. The baklava is everything that you could wish. The parchment-like paper thin phyllo is brown and crisp, the nutty spice filling sweetened with honey is gooey and luscious without throwing the whole thing out of whack. And the creamy pistachio ice cream is studded with whole nut meats and circled with more sweet honey.

Then there’s a scrumptious tart with a dough like crust dusted with powdered sugar that cradles ripe apricots exploding with flavor. The almond ice cream has a lovely texture, but the taste is muted. I anticipated a burst of marzipan, but it was not to be found. Still, the apricots soar.

Baba is casual, with a lovely, relaxed vibe. Your check comes with a hand painted evil eye rock to make sure the bill doesn’t blow away. You’re invited to take this ocular amulet with you to protect you from the evils of the world. I prefer to take away fond memories of a night well spent.

CL Food Critic Jon Palmer Claridge dines anonymously when reviewing. Check out the explanation of his rating system, and email him at [email protected].