What will end up in your glass at Overflow Brewing, St. Pete's newest brewery?

The possibilities are endless.

The latest addition to St. Petersburg’s assemblage of breweries is roughly a month away from debuting.

Head brewer Troy Bledsoe promises to serve up ambitious, one-of-a-kind beers in the new taproom, as well as plenty of easy-drinkers. One beer available on opening day: Origami Aircraft, a Berliner Weisse infused with tea. At least six of the brewery’s 16 taps will always be sours. Bledsoe is set to try other styles based on demand, which will run the gamut from IPAs to porters.

For Bledsoe, along with co-owner Ryan Sarno and barroom manager Jessica Holder, the priority is to create an enjoyable environment.

“We have some obscure interests when it comes to beer and otherwise,” Bledsoe said. “But we also like to have fun. We don’t want to be snobs about anything.”

Rapp’s brewery is known for trying to accurately recreate ancient and traditional beer styles while also being unafraid to go off the deep end in search of a novel beer experience. It was a good chance for Bledsoe to try his hand at everything, dreaming up brews like a hibiscus saison.

Bledsoe joins a host of other area brewers who’ve worked with Rapp at one point or another before going off to start breweries or hop aboard existing ones — among them Eunice Painter of Dunedin’s Woodwright Brewing Co. and Joe Scheibelhut and Dan Graston of Arkane Aleworks in Largo. Current brewers for Stilt House Brewery, Big Storm Brewing Co. and Tampa Bay Brewing Co. have also brewed with Rapp.

“It seems I’ve become some type of incubator,” Rapp joked.

Bledsoe left his full-time job in insurance to become a part of Rapp’s team back in 2014, and less than four years later he’s on the verge of having his own taproom.

“It can be stressful having people come and go. But I like to see them move on and be very successful. They all make me proud,” Rapp said. “I’m very excited for Troy.” 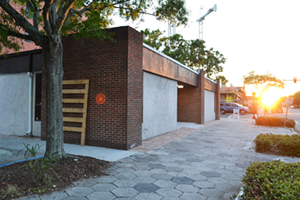 Overflow has a few finishing touches to complete before its soft launch, including the installation of a granite bar top and interior painting. Around 2,800 square feet, the building is all plain brick and walls on the outside for now, but it’ll soon be adorned by some of the owners’ favorite local muralists — think Justin Seabolt, James Oleson and Mark Stevens (aka Aurailieus Artist).

The taproom itself is conveniently split into different drinking quarters. One side will be furnished with bar games as well as screens and seats for sports fans, while the other side will be a screen-free zone for those who want to focus on socializing and beer talk. Additional sidewalk seating is anticipated along First Avenue North and Eighth Street North.

There are also plans for a creative partnership with the Morean Arts Center, Overflow’s backyard neighbor. Brewery patrons will have the opportunity to visit the arts center, make a customized beer glass and then have it stored in the taproom for future use.

As for what will end up in those glasses, the possibilities are endless.

“I’m excited to have 100 percent control of what I produce,” Bledsoe said, “with leeway to improve and experiment.”