Does it get more daring than that? 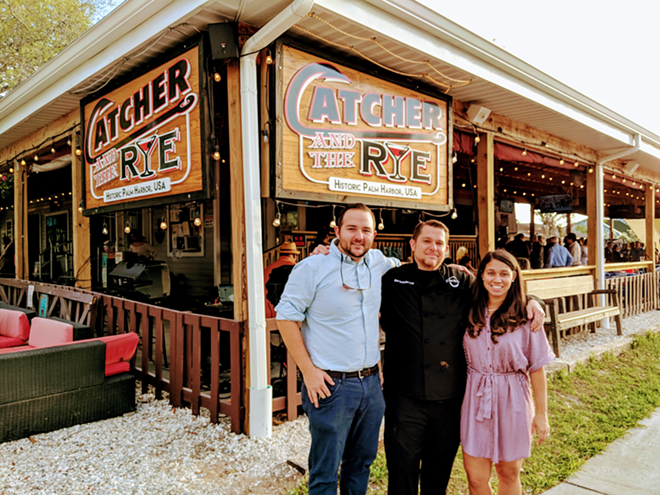 For barbecue buffs, the local restaurant management company behind The Black Pearl and The Living Room on Main is doing the Lord’s work.

Husband-and-wife owners Zachary and Christina Feinstein have splurged on an oyler (read: wood-fired barbecue pit) from Texas-based J&R Manufacturing for their first restaurant outside of downtown Dunedin, Palm Harbor’s Iron Oak New American BBQ — and there’s a seasoned chef curating the menu with culinary expertise that knows no bounds.

Also, does it get more daring than opening a barbecue place on Memorial Day, arguably the most barbecuey of barbecue holidays of the year?

Iron Oak has been a long time coming. After working on the concept for the past four years, the Feinsteins and Black Pearl executive chef Christopher Artrip — who was recently promoted to chief culinary officer for the Feinstein Group, the new umbrella that the couple’s family of north Pinellas eateries will soon operate under — plan to launch the forthcoming restaurant at 917 11th St., formerly home to the short-lived Catcher and the Rye, which closed earlier this month.

“Christina and I have always purchased other people’s businesses and tried to make them better,” Zachary told CL, “but with Iron Oak, we’ve been really pumped about this because it’s who we are as restaurateurs.”

Named for the 100-foot-tall iron oak tree that stood witness to his proposal to Christina at a California vineyard, Iron Oak does indeed open at noon Monday — thanks to a speedy renovation. But a quick turnaround is de rigueur for the Feinstein Group partners, who, with some serious elbow grease and a can-do attitude, completed their remodel of The Living Room in 36 hours.

Iron Oak diners familiar with Catcher will notice a paved patio and a reworked bar area, where every bottle in the liquor stash is now on display, including the expanded whiskey selection. Fire pits out front add to the laid-back hangout’s look, too (we’re talking about a neighborhood barbecue joint, after all). However, the showpiece of the restaurant, which features 150 or so seats, is found elsewhere.

Previously an underutilized area, the beer garden around back just might be Iron Oak’s coolest component. The gang is replacing the existing mulch with the field turf they purchased from several different sports teams, then filling the space — known as the Iron Garden — with lawn games, tables and likely cornhole competitions.

The Iron Garden, meant to conjure fond memories of backyard cookouts, is also where guests can feast their eyes on the oyler in action. This one-of-a-kind piece of machinery is the fourth of its kind in Florida, and the partners are thinking about dubbing the big red pit, Clifford the Iron Dog.

As for the dusk-till-dawn smoked meats, the restaurant takes a New American approach to barbecue during lunch, dinner and weekend brunch, meaning this isn’t North Carolina, Texas or any other style diners might be used to. The menu Artrip has developed, with an emphasis on humanely raised animals and organic products, is nondenominational more than anything — and there aren’t any rules when it comes to what ends up on the plate. Seriously, nothing is off limits.

“This is the first time that it’s completely Chris’s menu from starters to desserts,” Christina said. “He wasn’t able to do that at the other restaurants.”

“It’s a monstrosity of a brisket sandwich,” Artrip said.

Zachary added: “One thing Christina and I can say, the guy can do anything... his food is really going to speak for itself.”

According to Zachary, who says the north Pinellas area has an all-around awesome vibe, the Feinstein Group is stoked to become a part of the Palm Harbor community.

“We’re excited to do something that’s approachable for everybody,” he said. “I think that’s what’s so exciting about it.”