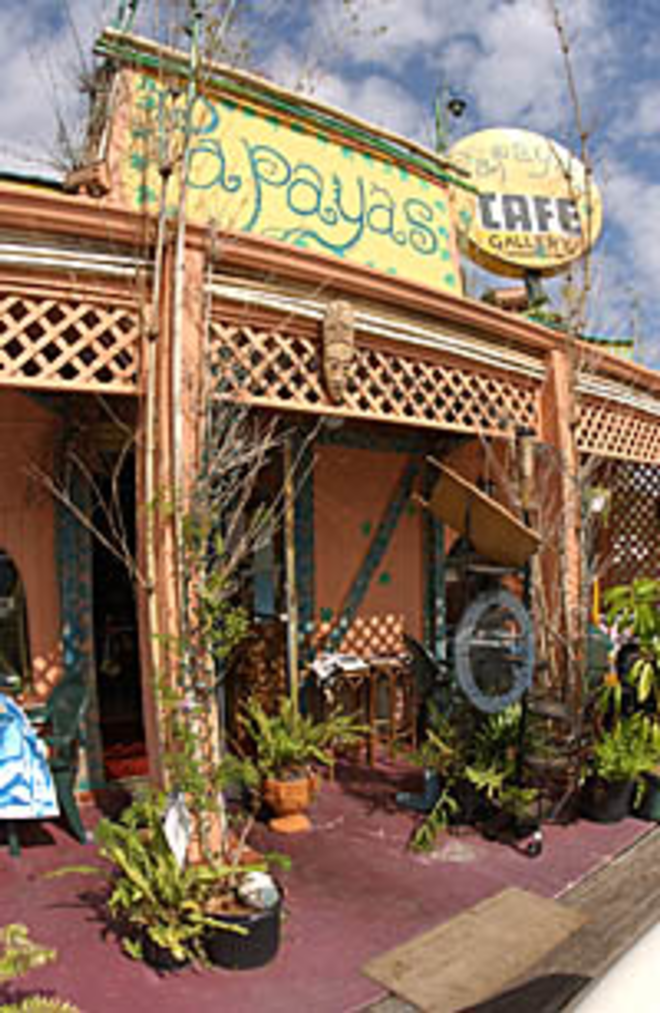 One of the many beauties of living in Florida is its nearly year-round selection of fresh, seasonal fruit. Avocado, guava, orange, tangerine, grapefruit, lime, lemon, mango. Some adept gardeners grow gigantic, juicy pineapples in their back yards. You even see banana trees. Used in downtown landscaping for decoration, their great burdens of fruit hanging like an afterthought over parked cars. Many chefs find such bounty inspiring, but it takes a skilled hand to coax delicate fruit flavors onto a restaurant plate. They're easily overpowered if paired with the wrong spice, for instance; or, they whisper when they need to shout.

One restaurant that uses our state's plethora of fruit expertly is aptly named: Papaya's Cafe. The chef, Greg Hilbert, obviously loves fruit, and finds a way to incorporate a lavish array of it in the tiny restaurant's menu. Fruit salsa served with smoked pork; tangerine sauce atop mahi-mahi; tropical slaw with fresh fruit; wedges of papaya (with capers atop) and fresh orange served with a fabulous homemade, smoked mullet spread.

The family-owned and operated restaurant is a little gem. Not only does it do fruit well, it pairs fruit with fresh, fresh seafood, caught the same day by the chef's brother, Vince Hilbert. Its unique offerings reflect an unusual talent and creativity I don't find too often in my restaurant travels. And its prices are more that reasonable: My mother and I ate like a couple of cow hands, and the bill was less than $50.

Paintings of fruit hang on the walls. The restaurant also serves as an informal gallery for art and photographs; some of the pieces are contributed by the multifaceted Vince.

Papaya Cafe doesn't yet have a license to serve alcohol, so there is no wine list, but you can bring your own beer, wine or booze to drink with your meal if you like. There is a $2 setup charge.

We started with Vince's smoked mullet appetizer with crackers ($4). "He went out and caught the mullet, smoked it this morning," reported the friendly waitress.

The plate was almost too beautiful to disturb, but we quickly got over that. A scoop of mullet fish spread was accompanied by various chips and crackers; fresh papaya topped with capers; juicy, sectioned orange and a single slice of fresh pineapple.

The mullet spread was fresh, fresh, and so creamy. It went on Ritz crackers like satin sheets on a round bed. We would have gone away happy, having inhaled the appetizer tray and a glass of wine, but there was so much more: Blue crab quesadillas ($7), grilled tortillas stuffed with the lightest blue crab and cheese, served with a cup of sweet-and-sour fruit salsa made from spiced, honeyed papaya.

Dinner orders arrived with handmade breads, and our choice of soup or salad.

The bread basket contained a square of moist, tangy banana bread, served with cinnamon-butter and basil-flavored white rolls with pesto-butter. We took a quick sample, then shoved them to a far corner of the table in order to pace ourselves — they were so tasty, we feared we would overdo on the prelims and have nothing left for the main event.

Out came a salad — varied, crispy and topped with an excellent, handmade tomato papaya vinaigrette. I chose soup, and that day it was something the restaurant called "gumbo." It lacked a classic gumbo's traditional ingredients — okra, meat or seafood, and spicy heat. Thus, it resembled more a thick vegetable soup. Its deep, brown color and rich flavor were compelling, no matter what its name.

As entrees, we ordered two of the day's specials. One turned out to be tender pork ($9.50). It was topped with a sprightly fruit salsa made with papaya chutney and accompanied with garlic mashed potatoes. The other was mahi-mahi ($10.50), layered with an unusual coating of fried plantains, and carrying an expertly prepared, tangy tangerine sauce. It arrived with fresh, crunchy string beans and a cheesy pasta.

At the next table was a young mom with toddlers. Ordinarily, this might be a situation to regard with alarm and dismay. Dining in a tiny restaurant, either with your own small children or near someone else's, whether they're paragons of virtue or not, is at best a crapshoot. But the casual atmosphere, the amiable waitress, and a "children's special" on the menu seemed to work magic.

They ordered from the evening's "kid's anything" section — appetizers, burgers and sandwiches, plus salad and dessert. $5 per kid. Great for the youngsters; quite a deal for the parents, too. It had a most agreeable effect: The kids did all the usual wiggling and squirming, but it was as if we were attending a silent movie, minus the soundtrack. They were too busy chewing to make any noise.

So when the waitress inquired whether we would like dessert and coffee, we replied wholeheartedly in the affirmative, and settled in for an extended stay. The coffee came, its steam rising with the scent of cinnamon. We ordered Key lime pie, even though the waitress told us the desserts were not up to their usual standards because the pastry chef took the day off to celebrate his birthday.

Atop the pie was one of the restaurant's signature items again — this time a sectioned piece of real Key lime, set on a whipped cream topknot. The pie's filling sported a silky heft that, once on the tongue, melted charmingly with a clear, citrusy flavor. Its crust was acceptable, but slightly soggy from humidity. It was the only complaint I could muster during the entire evening.

I guess lots of folks will be waddling out with a big pile of takeout boxes, thinking: We can feast like Tahitian gods again tomorrow on the leftovers.

FYI: The talented Hilbert brothers are putting on a four-course, Valentine's Day dinner at $24 per couple (!), featuring crab spread, salad, one of three entrees (salmon, roast pork or London broil), plus pie.