The final day to score Southern comfort food and cocktails from Proper before it permanently closes is Nov. 12. Owner Stephen Schrutt — who chalked the nostalgia-inducing bar's expansion up to demand in a statement — anticipates that Park & Rec's larger footprint will be complete Nov. 17.

"This is about the Park & Rec concept growing," said Schrutt, who grew up in the '80s and '90s, a time when he shared an Atari with his older brother. "We're looking to open up more locations in other markets. We're amazed that in its first year we have that kind of demand." 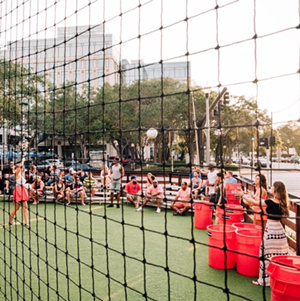 To enhance the experience of Park & Rec, more arcade games and outdoor entertainment (you've seen people playing giant beer pong out front in the yard, right?) are in store, as well as additional bars, new signage, high-top tables, and a dedicated kitchen and food menu.

The bar will take advantage of the kitchen equipment brought in for Proper, plus that existing pizza oven, to serve up shareable items like smoked wings, pork and wood-fired pies. At first, patrons can expect a limited lineup of eats — including house-made Hot Pockets and one-of-a-kind sandwiches — followed by a bigger selection soon after the expansion.

Schrutt's goal from the beginning has been to create more synergy between his flagship restaurant, The Avenue Eat + Drink, and his other concepts on the First Avenue South block. With The Avenue and Park & Rec closer together, the plan is no different.

"We see it in our block parties and our day-to-day operations. Blending the two spaces together to create one big space for food, fun, friends and live entertainment is a no-brainer," the owner said.

According to him, the remaining concepts — Park & Rec, Kings Street Food Counter (opened two years ago in the EDGE District) and The Avenue (which turns 6 tomorrow) — represent what Hunger + Thirst wants to be: innovative, creative and fun.

"I'm focusing on what I want to accomplish with these concepts," Schrutt said, "and by Park & Rec's second year, we're hoping to have our second location — most likely in the Tampa Bay area."

In addition to some Proper food becoming a part of Park & Rec, Hunger + Thirst will offer the late restaurant's barbecue through catering and events, on- and off-site, going forward.

Editor's note: This story has been updated since its original publication.