Plant City’s St. Martin Farms is home to one of the ‘Great Farmer’s Markets Of Tampa Bay’

A new column will explore the best Tampa Bay has to offer. 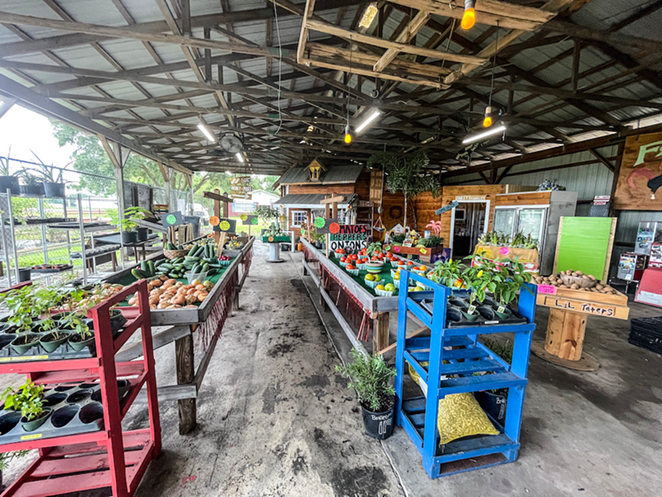 Jeff Houck
The newest owners of The Market at St. Martin Farms on Redman Parkway in Plant City are working hard to turn it into a must-visit stop halfway between Lithia and Florida’s strawberry capital.

My beautiful bride and I fell in love recently with The Market at St. Martin Farms. The family living next door on Redman Parkway in Plant City bought the land two months ago because they didn’t want to see the acreage go to housing development like so many other farm plots north of S.R.-60. The newest owners are working hard to turn it into a must-visit stop halfway between Lithia and Florida’s strawberry capital.

Long, black covers that make planting rows look like licorice already are striping the field behind the market in preparation for growing season. In a few months, the abundance of strawberries and other natural goodies produced from Plant City’s sandy soil will begin showing up in the charming market barn along the roadside. Until then there is a wide array of herbs, pepper plants and landscape shrubbery, including hibiscus with stunning electric orange flowers that made us gasp at the vibrant beauty. Cucumbers and onions were enormous and plentiful. A spool on its side displayed “Lil Taters.”

Vintage tractors, panel trucks and trailers sell the idea that you’re at a working farm. Jars of peach butter and dill pickle salsa are put up in a small room called Lumley’s Cannery for purchase. Another room offers homemade soaps and local honey. Limes and lemons mingle in baskets next to fire-red tomatoes with perfect skin. Boiled peanuts are kettled at the counter. (If someone ever wrote the 10 Florida Farm Commandments, one would be, “Honor thy peanut.”)

There are plans for a food truck and a petting zoo. For now, sleepy-eyed Simon the miniature donkey shoulders the affection load in a pen next to the market. He eats what donkeys eat. He doesn’t care for tangerines.

Simon is so named because “he has a cross on his back and there’s a character named Simon on a Jesus show we watch,” said Tori, the young woman at the checkout stand.

Sure enough, a cross-patch brush of dark, bristly hair runs along his spine and shoulders. He appears particularly to enjoy scratches just above his hips, if lazy wags are any indication.

The parkway out front is named for James L. Redman. Born in Plant City in January 1932. He was a lifelong resident. He was a member of First Baptist Church of Plant City, was a deacon and Sunday school teacher, served in the U.S. Air Force and was a member of the Florida Legislature from 1966-78.

Among his many awards were the St. Petersburg Times Award "Most Valuable Member of House of Representatives" in 1975 and Plant City Citizen of the Year in 1976. He was a life member of the Plant City Lions Club and received the Ellsworth Simmons Good Government Award in 1999.

As someone who spent his lifetime making Plant City a better place, there’s a solid chance Mr. Redman would have approved of this charming family market. Jeff Houck
Simon, the miniature donkey, temporarily handles all of the petting zoo duties at The Market at St. Martin Farms in Plant City.

Jeff Houck is a 12-year veteran of the Tampa Tribune, which he left in 2014 to pursue other endeavours. He’s now Marketing and Public Relations Manager at Columbia Restaurant Group, but also a farmer’s market devotee who’ll spend the next few months writing about Tampa Bay’s best until he’s covered every last one. Follow @jeffhouck on Twitter.

Jeff Houck is a 12-year veteran of the Tampa Tribune, which he left in 2014 to pursue other endeavours. He’s now Marketing and Public Relations Manager at Columbia Restaurant Group, but also a farmer’s market devotee who’ll spend the next few months writing about Tampa Bay’s best until he’s covered every last...
Scroll to read more Food News articles