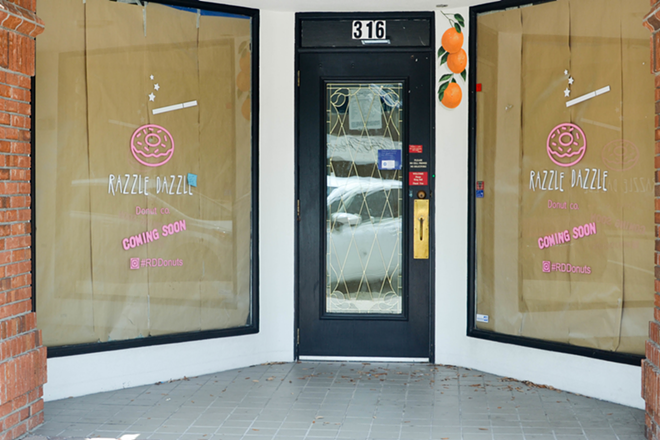 While the shop's interior, including its design, is still in the works, Hamid has mapped out both the food and drink side of the menu.

"We are going to do customizable doughnuts, similar to a frozen yogurt place," says the owner, who opened 9th Bar, then known as 9th Bar Espresso, in 2014. "You can grab everything you want to put on the doughnut, and the staff will apply it for you."

Neighbors with Strachan's and Tony's Pizza, Razzle Dazzle plans to focus on healthier options like fruit toppings and whole foods, as well as locally sourced ingredients — among them dairy products from Myakka City's Dakin Dairy Farms.

Despite the shop's modern take on a comfort-food treat, the classic pairing of coffee and doughnuts won't be forgotten. Guests can expect a few nitro cold brews on tap and nitrogen lattes, but no drinks with espresso.

"We will have a pretty interesting coffee program that 9th Bar will play a role in. High-end coffee instead of pretentious espresso beverages," Hamid said.

Angelina Bruno
A Post-it stuck to the anticipated shop's window.

Some exclusive doughnut creations will also make their way into the pastry case at 9th Bar. That way, patrons committed to cappuccinos can still get their sweet-tooth fix.

Razzle Dazzle's 100-square-foot space plans to offer a limited number of seats, as it's mostly meant for takeout. However, patio seating may be added once the shop gets up and running.

According to Hamid, keeping Razzle Dazzle in Dunedin was important.

"My partner and I are just downtown Dunedin people," he said.