Zooming onto the Selmon Expressway toward Brandon always reminds me that we are in the Space Age. It’s often clear sailing with nary a car in sight, so I struggle with the impulse to rocket ahead — well over permissible limits. I wonder what our ancestors, reliant upon the power of a single horse, would make of the ease with which I can zip back and forth across the bay in search of food.

Then I arrive at Ford’s Garage, not an oasis for automotive repair, but rather a bastion of prime burgers, craft beer and comfort food.

The interior design, however, takes me back a century to the early days of the horseless carriage. Henry Ford’s shiny examples of progress and the unabashed brilliance of American assembly-line entrepreneurship float above the bar and dining room as if Chitty Chitty Bang Bang were on holiday in Tampa Bay.

The mechanic’s theme is cleverly on display with a hose clamp “ring” holding the rolled shop cloth “napkin” in place. Even though the cloths are impeccably clean, one at my table is slow to adjust and still blanches as he wipes his mouth, lest he wipe axle grease or motor oil on his lips. 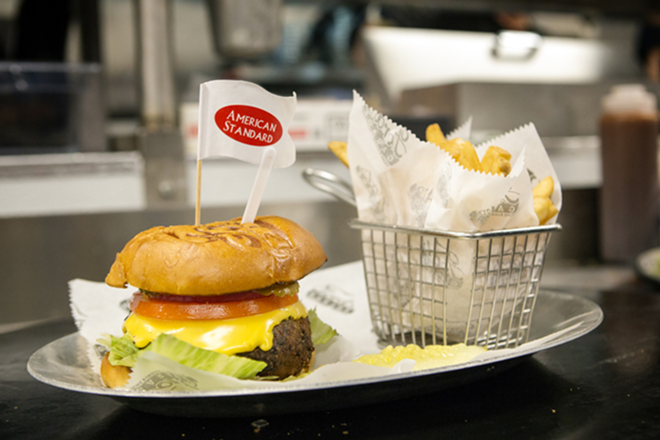 Chip Weiner
Like the others, American Standard sports a bun branded with the Ford's logo.

The appetizer temptations are many, from chicken wings to barbecue pork nachos to fried pickle chips. We succumb to the Firestone (tires, get it?) Shrimp, which, despite their name, are spicy rather than rubbery. The 10 deep-fried crustaceans sit two abreast like race cars at the ready, glistening with the heat of the Ford’s “boom boom sauce.” The shrimp are crisp yet luscious, and the spice is kept in check so that it enhances, rather than overwhelms, the tiny decapods.

Less successful is the lobster mac and cheese. Usually, this dish disappoints when the expensive lobster seems to have taken a holiday. Not so here. There are plenty of small coral-hued lobster pieces throughout the pasta, which is served up in a cute cast-iron skillet. The curvy cavatappi is a long corkscrew macaroni shape, like a slide in a water park for ants. The pasta is a bit soft for my taste and my first response to the restaurant’s “famous creamy cheese blend” is, “This tastes like thin Velveeta.” The mac’s intent may be to evoke childhood, but given the wonderful cheese options now at any chef’s disposal, this one left my table underwhelmed.

Ford’s has three similar branches near its birthplace in Fort Myers, and while the menu choices are the same, all the hand-pattied entree burgers are assigned names of local celebs ranging from politicians to athletes to news anchors.

The veghead at my table opts for the grilled Italian-inflected portobello named after the city’s founder, John Brandon. It’s got a huge, meaty mushroom on a whole-wheat bun topped with provolone, roasted red peppers, arugula, red onion and pesto-mustard seed mayo, plus lettuce and tomato for good measure. It’s a nice combo, but the sandwich is lukewarm by the time it hits our table.

Deciding to get more tastes for my buck, I get a quartet of sliders on brioche buns: black Angus with American cheese, diced tomatoes and red onion; chicken with Boursin cheese alongside sun-dried tomato pesto; pulled pork with bourbon barbecue sauce and crisp coleslaw; and a mini Nathan’s hot dog buried under an avalanche of chilli, cheddar and cilantro sour cream. The dog and barbecue are scrumptious. Unfortunately, the nicely conceived beef and chicken are overcooked. The kitchen needs to handle the little guys with the same care that goes into their larger brethren. 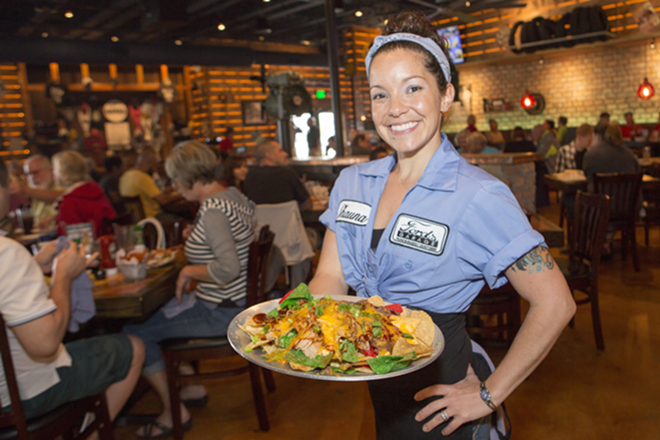 On the side, the Jumbo Piston Onion Rings are aptly named. The huge-cut rings are coated in cornmeal and fried to a deep automotive oil brown, which imparts great flavor. You almost don’t need the chipotle ketchup and smoky ranch sauces. The truffle fries, on the other hand, are disappointing. The fresh-cut fries are just adequate, and our batch is sorely lacking in truffle oil with a scant teaspoon of pecorino Romano-parsley blend hardly worth the $3 upcharge. Stick to the rings.

The dessert offerings include cinnamon pretzels, apple dumplings, a giant chocolate cupcake for sharing and a commercial key lime pie. We try one of the thick and creamy shakes, which arrives in classic ’50s style with real handmade texture, but it’s a bit light on chocolate punch. Mom’s “Secret Recipe” Rum Cake is delightful. The yellow cake has a lovely buttery flavor and firm texture that stands up well to the Bacardi glaze. The rum is nicely balanced, though my posse wishes the kitchen was more generous with the yummy candied walnuts.

Needless to say, the restaurant’s craft beer menu is comprehensive, with dozens and dozens of hoppy choices for every palate to explore.

And judging from our hour-plus wait to snag a table, the burger-and-beer garage fills a niche in Brandon that would make old man Ford very proud indeed.