Restaurant review: The spice of life at O Cocina

O Cocina & Flights is a stylish place to play in South Tampa, but some dishes lack essential elements.

The room’s center glows with dozens of clear globes hovering over a beehive of six high-topped, C-shaped booths clad in vertical channels of fabric that shimmer like burnished brass. Add polished concrete floors, and the careful use of reclaimed wood, and the room screams sophisticated but accessible — a stylish place to play.

Crisp chips and a fiery puréed salsa arrive at the table. The salsa is not for the faint of heart; our server says the kitchen is still tweaking the recipe. Apparently, the first big batch was too mild, and this one is too hot. Let’s hope the next one is in Goldilocks' zone. 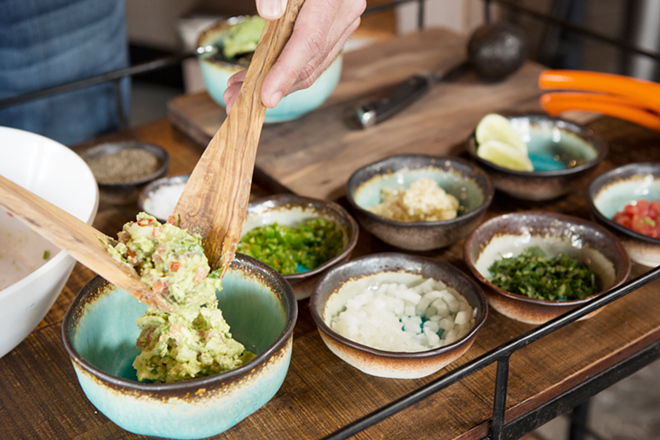 Chip Weiner
With a stocked cart of avocado, tomato, onion, lime and more, the restaurant prepares its guac tableside.

Covering mainstays of Mexican cuisine, the menu also raises expectations, yet it’s selective rather than all-encompassing. That begins with making guacamole tableside, which equals drama, so why would you create it in a simple white melamine bowl when you could use a molcajete, a theatrical tool carved from volcanic rock? Though the guac is undeniably fresh, it’s bland. Lots of flavors in the arsenal fill the serving cart — garlic, lime and cilantro (plus salt and pepper) — that barely register. In this case, a bold idea falls short, but can easily be fixed.

O offers three ceviche selections. We jump on the ahi tuna with sushi-size slices of pink fish glazed in coconut milk, finished with chunks of charred pineapple, thin serrano chiles and julienned white onion. While the plate is enticing, the fish is woefully underseasoned. Ceviche’s middle name is acidity, and the menu’s lime must’ve been out back on a break with the salt and pepper. Tuna is the star, but instead seems like a dull afterthought without the presence of these essential elements, despite the piña colada treatment.

Next, we try a taco trio. Pescado (grilled mahi, pineapple-habanero salsa, cucumber and cabbage slaw); carne asana (marinated grilled sirloin, caramelized onions, chipotle salsa and queso añejo); and cochinita pibil (Yucatán-style barbecue pork and pickled red onion with cilantro). As with most of the other dishes, the proteins are well-cooked, but they don’t pop, regardless of the additional flavor elements.

Salmon à la parrilla places a perfectly grilled coral-tinged fillet on charred tomato vinaigrette. The garnish of roasted oyster mushrooms and chayote squash provides textural contrast and earthy notes, though the fillet still seems underseasoned. With this ongoing theme, I wonder if the kitchen is deliberately avoiding salt and black pepper to focus on other spices.

Nonetheless, pollo en mole poblano is memorable. The largely boneless half chicken is covered in spicy dry rub and grilled. It bursts with flavor, and the mole is one of those distinct Mexican wonders that successfully layers tastes, beginning with the sweetness of chocolate balancing the subtle heat of poblano chilies to create a savory delight. The charred skin, juicy meat, piquant sauce and green rice are a lovely mouthful worth remembering.

Chip Weiner
The ceiling and back wall of O's bar are an L-shaped 3D mural with a colorful mosaic of succulents.

Although there’s a nod to Mexico on the dessert lineup with flan, O is mostly looking toward “made-to-order” alongside locally churned vanilla ice cream and a seasonal sorbet. The two popular, custom sweets are a cast-iron chocolate chip cookie (with a scoop of delicious vanilla and chocolate drizzle), and a flavorful version of chocolate lava cake featuring a dollop of house-made dulce de leche in the center. The lure of these desserts depends on personal preference. The cookie has a very dry, cake-like texture instead of a soft, doughy center as with the ubiquitous Toll House recipe, while the lava cake is more lava than cake. I’m disappointed as this overwhelms the dulce de leche, but a tablemate squeals with glee and happily cleans the plate. Chocolate goo is in the eye of the beholder.

The opening menu was developed by an anonymous consultant. However, executive chef Pedro Arreaza has plenty of street cred working with notable chefs Marc Vetri and Michael Symon, prior to his sous chef gig at Michael Mina’s fabulous Locale Market. With well-conceived dishes and premium ingredients, there’s so much potential here.

All I can say after my visit is, “Take the gloves off.” Heat in the mix is no reason to hold back on salt and acidity. Unbound, there are surely more stars in O’s future.