Maybe it’s because I frequently pass Dunedin’s historic Fenway Hotel (which is now being renovated as the International Center for the Taoist Tai Chi Society), but when I first heard “tom chee,” I was reminded of the traditional, low-impact Chinese dance-like conditioning exercise regimen.

Tai chi is a way of centering and relieving stress; Tom+Chee gives diners that same warm, comforting embrace. There’s a sense of calm that pervades the air. Instead of standing on one leg like the “golden cock” or moving to “wave hands like clouds,” you relax through a series of grilled cheese options that seem almost unlimited, but are indeed well-organized.

There are proven combos under “fancy” and chip-laden “crunchy” ones, plus a build-your-own section with five breads, 10 cheeses, seven meats, eight veggies, six extras, and the “I’m a glutton so I’ll add mac ‘n’ cheese and/or have a double-decker" option. That puts your choices (including gluten-free and vegan) well into five figures. You could try a different one every day for the rest of your laid-back tai chi life.

The quintessential match for grilled cheese is, of course, tomato soup. Campbell’s has made a fortune on the iconic connection that’s only a can of water away — or milk, if you want to live dangerously. Luckily, the restaurant’s soups are created in-house. That said, the classic tomato, creamy tomato basil and chunky tomato basil with a little garlic are pretty standard fare. They have the slight acidic bite that makes tomatoes fresh and mouth-watering, but they also push salt to the limit. 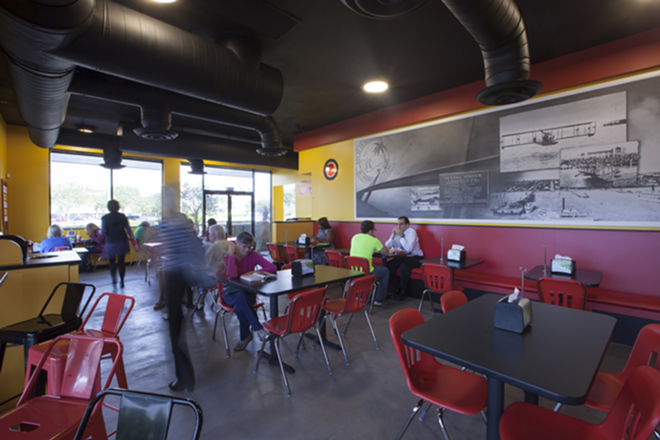 Nicole Abbett
Tom+Chee has its patrons order at the counter, sit and wait for delivery.

My favorite is easily the beer cheese soup for balance and depth of flavors. It’s one of the seasonal soup options, which also include cheeseburger and blue cheese chili.

The “mac and chee” side tastes of real cheese instead of the brightly colored Kraft powder that addicts millions of toddlers. Many are teens, or even college students, before they discover true Cheddar flavor. Even then, it’s a tough addiction to break. Some are able to go cold turkey to real food; others never lose their gold dust craving. The cheese here is winning, although the pasta is cooked to submission. I know many folks like their mac soft, but for me, al dente is far more interesting. After all, this isn’t pudding.

Each sandwich delivers in spades. First of all, the buttery caramelization brings crunch to the high-quality bread, with creamy oozing Wisconsin cheese. The horsey sauce and the shrooms give a balanced hit of flavor to their individual mashups.

All the items use fresh, quality ingredients made with care and served hot and friendly. It’s a winning blend that shows why there are 40-plus locations nationwide, thanks to Shark Tank exposure. Mace and Wagner aim to add one branch a year across the Bay area till they have five locations for your pleasure.

I must admit to being skeptical about the sweet grilled cheese treats made from glazed doughnuts. The classic just uses Cheddar, but there’s an Elvis tribute with banana and peanut butter, a chocolate-bacon fusion, and fresh strawberries with candied lemon. We settle on the S’more, which has de rigueur graham crackers + chocolate + a marshmallow mascarpone. It’s unexpectedly delicious and decadent.

But what really has my table talking is the blueberry compote + blue cheese + lemon mascarpone. The doughnut has a small hole, which is plugged with mozzarella so that the fillings only ooze out the sides onto your fingers. It’s a scrumptious adult mix — the sweet berries mesh perfectly with the earthy flavors of the blue-veined cheese. The glaze adds a grace note to happy flavors in your mouth, as well.

Nicole Abbett
The Oreo special is one of the restaurant's many grilled doughnut creations.

The drinks are limited to bottled water, a DIY Coca-Cola fountain array, and vats of sweet or pure iced tea, and the service could not be better.

Wagner greets the guests, while Mace monitors cameras, assuring all is well and that everyone is on their toes. They’ve trained the friendly young staff well, from order-takers to a smiling crew of eager servers who deliver the hot, oozing cheese. You simply place your order, receive a number, and before you know it, the crackerjack service team descends. They also keep the space spotless, whisking away your finished baskets with the effortless grace of a well-drilled Michelin-starred gastronomic temple.

The couple has their eyes on the ball, and their enthusiasm has the staff humming. It’s time to practice Tom+Chee on a regular basis.