There’s something very comforting about a restaurant housed in a reclaimed bungalow. Perhaps its multiple, intimate dining spaces lend themselves to charming design. Or maybe it harkens back to childhood memories of visiting special relatives. For me, I can’t help thinking of the wonderful Brigtsen’s in uptown New Orleans near the river bend. Or, closer to home, the winsome Chef T’s Garden Grill in Lakeland. Just entering the front door piques your expectations for something special. At Safety Harbor’s Green Springs Bistro, colorful horizontal beadboard-lined rooms with beachy themes and works by local artists catch your eye. And the bar has a humorous ceramic fish practically engulfing a bottle of wine.

GSB celebrates Gulf coast cookin’ with a touch of the Mediterranean thrown in. A teasing demitasse of tomato-bean bisque prepares our palates. Then, chef Paul Kapsalis honors his Greek heritage with two terrific appetizers. Saganaki — oven-roasted kefalograviera (a firm Greek sheep’s milk cheese), bathed in olive oil in a sizzling cast-iron skillet (from whence the name comes) — arrives at the table with a golden brown crust, and our server squeezes fresh lemon and shouts “Oooopa!!!” with a flair, leaving the table to luxuriate in the warm, oozing cheese with fresh country bread.

There’s also beneli, a Greek flatbread (“pizza before it was round and covered with sauce”) topped with two types of Greek cheese, plus some portobello and tomato slices. The crust is crisp on the bottom, with a chewy soft center and plenty of flavor.

After swooning over gumbo a few weeks back, I can’t resist “Grandpa Pracka’s recipe from the Bayou Teche” from southwestern Louisiana. There are shreds of juicy chicken and spicy sausage with okra floating in a rich, dark roux over rice. It’s good, if not transcendent. The blue crab cakes are pan-seared to a golden brown, but the texture is of minced crabmeat. Just as I’m lamenting the lack of lump claw chunks, a dining companion waxes eloquent over the subtle flavor as she finds most versions overpowering and too fishy. So if you like mild crab cakes, this is your place.

Seared mahi mahi crusted with sesame seeds is cooked perfectly. The fish is moist and dribbled with a sweet soy and spicy sriracha sauce that adds some pop to the ginger jasmine rice.

Most of the entrees feature rustic buttermilk smashed red potatoes and seasonal roasted vegetables, in this case carrots. Root vegetables rarely serve as a springboard for excitement, but these are nicely caramelized and bring out the carrots’ natural sweetness. The potatoes are a hit with my pals, although mine can use a little salt (which is preferable to the opposite, which can’t be remedied at the table).

Tender chicken breast is stuffed with Gorgonzola cheese and bacon. Luckily, chef Paul has a light touch here. The breast meat is moist and balanced with the stuffing, where the assertive flavors could overwhelm. A pecan crust adds another dimension to the dish, a pleasant crunch with nuttiness that melds well with a touch of heat from the Cajun cream gravy. 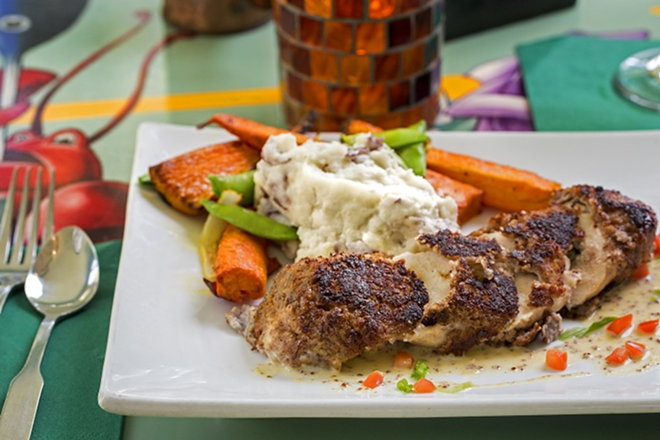 Chip Weiner
The pecan-crusted chicken had a pleasant crunch with nuttiness.

The wild mushroom ravioli are made with shiitake, cremini and portobellos. The filling is complex, but the pasta is cooked too long for my taste. Despite its softness, however, there’s good earthy flavor and some tang from a mild goat cheese sauce.
Bison chopped steak is essentially an 8-ounce lean meatloaf with grilled red onions and red wine glaze. The bison is lean but, thankfully, the meat is not dry, and the glaze goes nicely with the house potatoes.

My favorite from our entree choices is the creamy pesto risotto topped with seared Key West pink shrimp and sea scallops. The shellfish are succulent and the rice is perfectly creamy with just the right bite. The chiffonade of basil adds a proportional herbal note. Risotto is such a pleasure if it’s done well. Most often it’s a crap shoot; well, here we roll boxcars!

They’ve got a carefully chosen wine list with most selections available by the glass, refreshing white or aromatic red sangria with their special recipe highlighting zesty orange, green apple and cinnamon aromas. There’s also a ruby red grapefruit version for tart-o-philes; you know who you are. And my Guinness-swilling English visitor gave Clearwater’s Little Joe Oatmeal Stout from Pair O’ Dice Brewing Co. (which CL highlighted last week) a big thumbs up.

There's no printed menu of desserts, but two are regularly offered: a moist six-layer devil’s food cake that packs real chocolate flavor without being cloying and a warm, fresh blackberry-blueberry crumble with vanilla bean ice cream. The fruit is sweet and the juxtaposition of textures and temperatures is truly seductive. GSB also offers seasonal dessert specials on occasion, but I must say that even with the limited choices, my table was smiling from ear to ear. Both desserts are comfort food, adding the kind of luscious grace notes to a meal that send you into the night whistling a happy tune indeed.