This week's #BecauseGluten hones in on a celiac-friendly Southern staple. 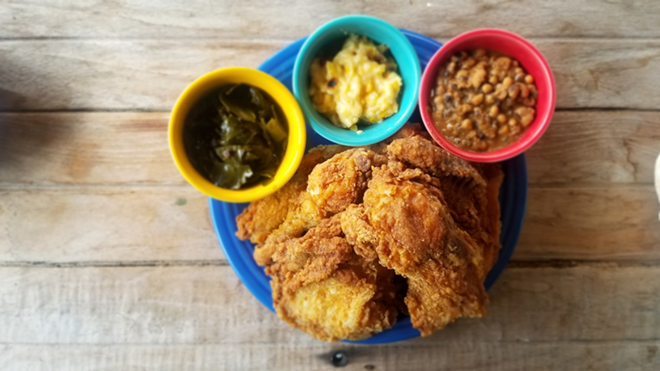 Ray Roa
Before celiac, our A&E editor's go-to treat was anything Southern in nature, including fried chicken.

I miss fried chicken, and it’s weird. I’d eat the Southern staple maybe twice a year before my celiac diagnosis. Maybe. But there’s something about being told, “You can’t have this ever again,” that makes me want it all the more.

My favorite recipe to read — yes, you read that right, because since I can’t eat it any longer, I’m stuck reading about it — is Garden & Gun’s Southern fried chicken. The Crisco recipe makes my mouth water, too, because, before celiac, my go-to treat was anything Southern in nature, culinarily speaking. While some of the greats (cornbread, for one) have survived post-diagnosis, fried chicken has not.

Yes, I know I can use Cup4Cup and replicate either of those recipes. And I will eventually, though it does feel like sacrilege. Southern food is a religion, and eating collards, cornbread and fried chicken around a supper table is better than any mass I ever attended.

Which is why I never even thought about popping into The Roost in St. Pete Beach. The side of the restaurant’s building — once the unremarkable Dockside Dave’s — brags about its role as a purveyor of “Northern-style chicken.”

What can northerners possibly know about crispy fried chicken?

Apparently, what they know is how to make it without gluten. I discovered the place not of my own volition, but thanks to a nifty little app called Find Me Gluten Free (the 2 Guys Talking Gluten Free podcast turned me on to this). It’s essentially Yelp for celiacs — and people who are gluten intolerant or averse, including folks with Hashimoto’s, psoriasis and eczema, as well as those who are GF for all the wrong reasons. That’s important because the app allows users to set their level of gluten intolerance so others can appropriately evaluate their reviews.

During a random search to see which St. Pete Beach destinations served decent gluten-free food (I’d eat oysters and shrimp at PJs thrice daily if my budget allowed, but I was curious about what else was out there), I found out The Roost makes gluten-free fried chicken. And people were losing their shit over it on the app.

“Hands down the best GF experiences [sic] we’ve ever had... The non GF items were equally delicious and the food all reminds me of eating at my maw-maw’s in the south,” said one user.

“First fried chicken my husband could eat in 12 years,” said another.

“It’s gluten-free heaven!!” said yet another user. “The fried chicken is WONDERFUL. Not ‘wonderful for gluten free’ but truly wonderful. Not only is it GF, but it’s made with some kind of magic that keeps the crust crisp even after refrigeration.”

That last comment is what pushed me to go. After almost a year and a half without any intentional gluten, I fear I’ve lost the ability to know what GF food tastes good to regular people — because I never understood how celiacs could swear their gluten-free pizza crust, bread and macaroni tasted “like the real thing” when it clearly tasted like reconstituted cardboard. Now I know. I haven’t eaten real bread in so long. When I get GF bread that doesn’t make me gag, I think, “Ah, yes, you taste just like real bread.” My husband’s super-sensitive palate offers a litmus test for this; the man is some sort of Secret Squirrel when it comes to ferreting out ingredients that don’t belong.

He also loves fried chicken more than I do, though he eats it less frequently. He doesn’t have celiac — he simply has more self-control when it comes to downing deep-fried foods.

We’ve eaten at The Roost twice — once in the restaurant, which is never crowded, and once at home. Both times the chicken blew us away. I was ready to cry tears of joy, and even my usually critical husband found it exceptional.

“It’s good, even for someone who doesn’t have to have it gluten-free,” he told me later. “I would not have known it was gluten-free. And I like gluten.”

I’m not entirely certain why The Roost isn’t teeming with people every day. Perhaps because it’s on a tourist-soaked sandbar and “Northern-style fried chicken” (it’s like Broasted®, only not trademarked) doesn’t exactly scream “vacation in the subtropics.” Perhaps it’s simply that the building looks weird — it’s blocky and uninviting. Perhaps the chances of anyone (who isn’t actively seeking GF food on the beach) finding the restaurant organically are low.

Honestly, I don’t know. What I do know is that Leanna Wharry, the manager, and her crew have a healthy knowledge of cross-contamination issues and what it means to have a dedicated fryer. I can trust the food — which is something I can’t say for every local eatery that makes a GF claim. I love the food.

And if you can’t have gluten but miss fried chicken, odds are, you will, too.