It's tucked away behind Bodega. 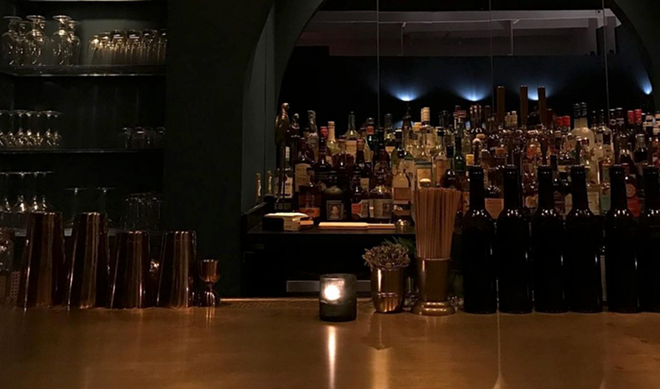 “We initially wanted to open a bar at Bodega’s original location,” Debbie told Creative Loafing Tampa Bay on a phone call. But once the concept took off, the extra space at 1124 Central Ave. became minimal and the plans of a bar were put on the back burner. That was until Bodega relocated just a sneeze away at 1180 Central Ave., within the former Mis en Chic space.

“The space itself dictated to us what we were gonna do when we decided to move. It’s a beautiful building. During build-out, there was a little space tucked in the back,” Debbie recalls. Although it’s located within Bodega, Bar Chica operates as a separate entity—which means a separate drink and food menu.

While the cocktail menu is rum-heavy, Debbie says that  Bar Chica is not a rum bar by any means. Bar Manager and sommelier Garrett Ramsey hand-picked popular cocktails and created some signature sips for the menu. There’s the Hemingway Daquiri made with Bacardi Silver rum, maraschino liqueur, grapefruit, lime and sugar. Not big into rum? There’s also the Firing Squad made with Dobel Silver tequila, pomegranate, lime and Angostura bitters. Cocktails range in price from $10-$12. Within the coming weeks, guests can expect the cocktail list to double in size to 22 curated sips.

Bar Chica hosts seating for 22 guests, although capacity is limited and will be regulated to ensure the safety of guests and staff during the COVID-19 pandemic.

The couple decided to keep opening weekend on the down low to quietly introduce the new intimate cocktail bar to the bustling ‘Burg scene. But now that word is out, you might expect a wait when trying to check out the new digs decked out in brass, dark teal and emerald greens inspired by a treasured vintage brass parrot from Debbie’s home. The cocktail bar also operates with dim lighting, adorned with hand-sketched parrot drawings lining the walls.

“We designed it ourselves. It was half-ready when Bodega opened, but we wanted to take our time with every detail,” Debbie explained.